Kalpetta, Kerala (PTI): Forest officials at the Wayanad Wild Life Sanctuary here are excited as a preliminary assessment of tiger population, conducted by the Sanctuary, indicates an increase in the number of big cats by about 10in the last two years.

Ten big cats, including three cubs, have been sighted in the sanctuary during the three-day survey of tigers and co-predators, which concluded on Monday evening.

Five tigers and a cub were sighted in Tholpetty range, one tiger and two cubs in Sulthan Bathery range and one tiger each at Kurichiayd and Muthanga areas, a Wildlife Department official said.

Though only 10 tigers were sighted during the survey, their exact population in the range could be between 20 to 25, C.T. Joju, Assistant Wildlife Warden, told PTI.

This is considered as a sharp increase in the Tiger population as the last survey conducted two years ago put the figure between ten and fifteen.

What was important is that the sighting of the cubs showed that the sanctuary is a healthy habitat for tigers, he said.

A firm idea of the exact number of big cats in the Sanctuary could be given only after a detailed analysis of the indicators gathered during the survey, like pug-marks, droppings, hair and scratches made on the trees by the tigers, he added.

The team, which carried out the survey, came across about 50 pug-marks, droppings and hair and scratches on trees.

Pug-marks are important indicators of the distribution of tigers in an area.

The droppings and hair of the animal are as important as sighting itself since DNA of the animal could be extracted from them, based on which a fair idea about the gender distribution of the population in the area could be made, the official said.

The genotyping would be done at the Wildlife Disease Diagnosing Laboratory at Sulthan Bathery near here.

This would also throw light into genetic relationship, prey preference, parasitic load and individual identity of the tiger population, he said.

The results were considered to be a positive sign indicating the success of the Tiger conservation project here as a similar survey at Panna Sanctuary has revealed that male tigers have virtually disappeared from the range.

Each block would be surveyed by a four-member squad comprising a forest official, a NSS volunteer and two watch men of anti-poaching camps in the sanctuary.

Pet tiger killed and taken from Vietnam farm      A three-year-old tiger was ...

Central team slams MP for missing tigers but year ago, it sang praises 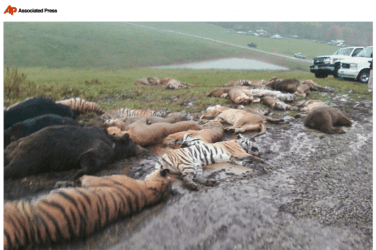