Zucari is a serval who was born in 2015 and came to Big Cat Rescue in 2017.  Zucari’s former owner has refused to reveal who she bought him or Chaos the caracal from.  Since it was illegal to have the cats in Ohio, it would implicate the seller if she did.  Zucari was housed with a number of domestic and hybrid cats for the purpose of breeding hybrids for the pet trade.  Some reports said he was housed with 15 other cats.  The owner insisted it was only four breeding females.

While some states prohibit the possession of servals they do not prohibit the possession of serval hybrids. So owners of servals claim their servals are hybrids to escape prosecution.  In this case, the Ohio Department of Agriculture figured that if someone was breeding hybrids, they probably had wild cats, and they were able to surprise the owner and seize the cats.  Faced with charges, the owner agreed to sign the cats over.

According to the former owner, Zucari lived in half of her garage.  The owner described herself as loving the cats and felt she gave them plenty of room.  This is typical of private owners who have no idea the amount of space or care that these cats require.  Zucari arrived with a virus that can be life-threatening if it mutates.  The virus is common in these catteries, due to the overcrowded conditions and lack of fresh air and sunshine.  The owner said she knew about it but had not come up with a way to deal with it, other than just give away the infected cats. Hopefully, the virus will not mutate and Zucari will enjoy many years here.

The two Caracals were housed in a cage in the basement and had access to a small enclosure outside via a door, they were house together and are both intact.

The serval was housed in an outdoor dog kennel type cage with approximately two dozen hybrids and domestic cats.

All three cats were sedated on Monday morning for a basic exam to have blood drawn to be microchipped and to get vaccinated.

If you want to be an integral, important part of rescuing Cyrus, Chaos, and Zucari, we would be very grateful to receive your donations toward the cost of their transport, surgeries and lifetime care at our sanctuary. It is your donations that allow us to continue to be able to immediately say YES when we are asked to save exotic cats in need! THANK YOU!

Zucari the serval would do anything for a snack! Watch as he runs for a tasty treat.

This clip shows more of how big the cages for the small cats really are. Often people think our cages are small because in photos or videos they cannot see the whole space. This video clip shows Zucari running through part of his suite of cages.

KEEPER MOMENT: Zucari Serval shows off how his enclosures are hooked together, and sweet Servie Serval hesitantly greets Marie!

People often ask if the cats have room to run and play and as you can see in the below short video clip where you can see part of Zucari’s suite of cages, a.k.a. his enclosure, they have lots of room to run. Building our cages in sections like this allows us to close off a single section for maintenance, repairs, or landscaping tasks. Since each section has a feeding lockout, a water bowl, and a den the cat is never without if they have to be locked out of one section for a few hours. 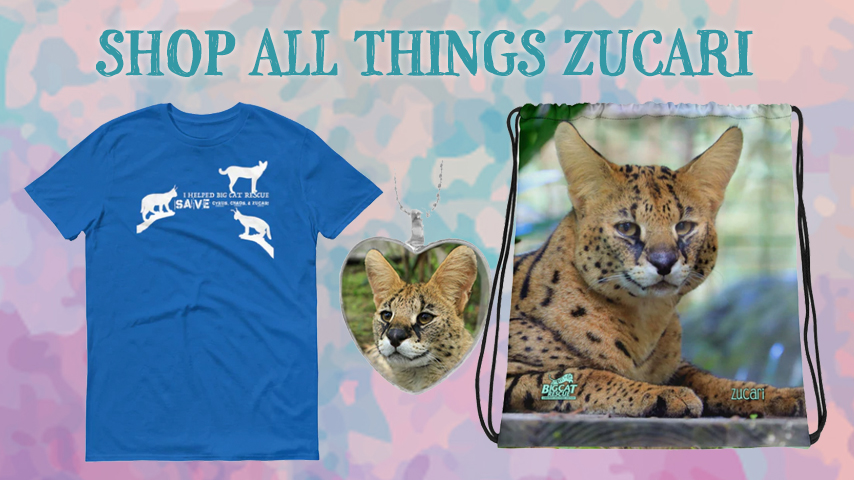