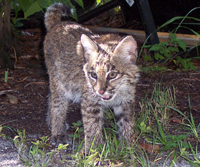 n just 4 weeks 4 bobcats found themselves pushed out of their homes by rampant development.

A baby bobcat was found emaciated and apparently orphaned or abandoned by his mother.  No mother came calling for him and neighbors were reported to have been shooting at a bobcat for harassing their livestock.  Given this baby’s neurological disorders, however, it could be that his mother just knew he couldn’t survive and chose to spend her energy on offspring that could.  Big Cat Rescue decided to give him a shot at freedom and if he can’t overcome his challenges, he will have a home for life. 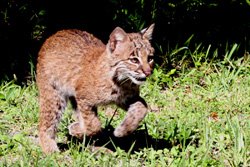 3 days later: One elderly bobcat had been completely surrounded by industrial parks, Tampa International Airport and the new highway exchange wiped out the remaining woods she used to call home.  She had been eating out of dumpsters and hanging out in parking garages, but when the lack of good food brought her to death’s door, she laid down in front of an office building to give up the ghost.  Big Cat Rescue raced to the scene and after a feeble attempt to flee the old cat allowed Rescuers to carry her away.  She is thriving in a rehab enclosure and catching her own meals.  Soon she will be strong enough to go free… but this time where there are some forest left.  See her rescue in the video below and read more about her HERE. 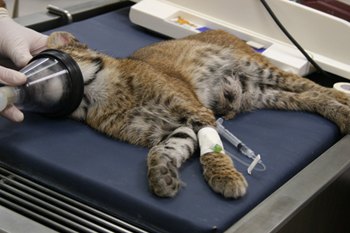 3 weeks later:  Another baby bobcat call came in.  He only has one eye and a lump on his belly the size of an orange.  Again, Big Cat Rescue was there to get him the medical attention he needs.  Emergency surgery repaired the hernia in his abdominal wall.  The swelling was the contents of his intestines and other internal organs that had spilled out of the muscled area and were rubbing away at the inner lining of his skin.  The attending vet, Dr. Liz Wynn, believes that his hernia and missing eye were caused by some sort of trauma.  The area where he was found is completely surrounded by development in West Tampa, but bobcats are often reported there and last year one was found as road kill. 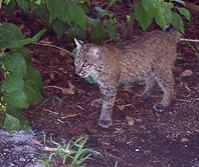 When bobcats are rescued from the wild it is always the intention of Big Cat Rescuers to give them every possible opportunity to live free once more.  No cat should have to spend his life in a cage.  Most of the 100+ big cats at Big Cat Rescue are not candidates for release because they are not native to Florida.  Big Cat Rescue provides a permanent home to lions, tigers, leopards, cougars and 16 species of exotic cats, many of whom have been rescued from the pet trade, circus acts, zoos and fur farms.  Unlike zoos who claim to be the arks of the future, by keeping animals captive, Big Cat Rescue really is saving our native wildlife, nursing them back to health and then returning them to their habitat.

Get a brochure you can print and share:  Living with Bobcats 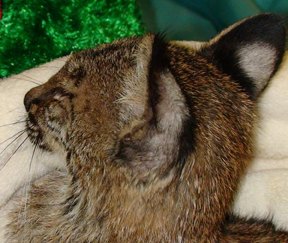 Within minutes of a call coming in from a veterinarian on the Spacecoast, Jamie and I were racing cross country to save a baby bobcat.  The vet explained that a man had seen a car hit the baby bobcat and he scooped up the unconscious kit and pulled into the first clinic he could find.  With legs splayed in every unconceivable direction and blood pouring from the kitten’s nose, no one expected him to survive the night…

But he did.  Barely regaining consciousness the cub showed no sign of being able to see or hear but he struggled desperately to walk.   He had to catch up to his mom.  She couldn’t be far ahead.

When he was still alive the following evening and the blood loss had slowed to a trickle from his nose, the vet called Big Cat Rescue to see if we would come get him.  It would be an eight hour round trip in the middle of the night and the vet’s description of his condition didn’t sound promising, but we had to try.

On the long trip to Merritt Island I thought about the vet’s description of the kitten’s determination to take off walking, even though he was walking into walls and getting stuck in corners of her office.  What possessed him to overcome his body shattering impact with a car and try to keep on going?  She had said he was a kitten, so I figured he must have been trailing his mom at the time of the impact.  She said he was emaciated and he was struck on the main road, near the bridge that connects Merritt Island to the Florida mainland. 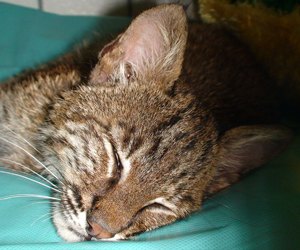 Knowing that extinction rates on islands far exceeds that on larger land masses it didn’t take a rocket scientist to figure out that with rampant development in Merritt Island there was probably not a sufficient prey base left for a mother bobcat to feed herself and her young.  She and her babies were starving and her only option would have been to pack up the kids and go…but they were too big to carry and too small for this kind of daring travel.

She would wait until dark and then bolt from brush along the road across the bridge to better hunting grounds.  No doubt her heart was racing because she knew the dangers and I could imagine the tremble in her call as she urged her little ones to hurry across the road.  I shuddered at what she must have witnessed when her smallest and weakest kitten disappeared under the wheels of a car.  The sickening sound of the impact with his fragile little body.  The horror of seeing him flattened and bleeding and even worse to see a dreaded human scoop him up and drive him away.

I thought about my own family, and my extended family of staff, volunteers and staunch supporters.  Despite the fact that they are all overworked and underpaid doing the work of angels in caring for the abandoned and abused, I keep urging them forward to take greater risks to end the trade in wild animals.  The twenty billion dollar trade in wildlife is now second only to the illegal trade in narcotics and many of the same gun and drug dealers are involved in both the legal and illegal trade in lions, tigers and other exotic animals. 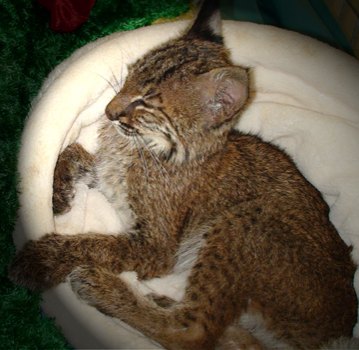 As we at Big Cat Rescue press forward for laws that protect the animals we are targeted by the vengeance of those who have been profiting on the trade and the delusional who support that trade because they define themselves by the type of animal they hold captive.  They are a dangerous lot who threaten me and the ones I love but great rewards only come to those who take great risks.  Just like the mother bobcat and her kits we are firm in our belief that there is a better world on the other side of the battlefield.  There is a world where we all live free and respect each other’s place on this glorious planet.  All we have to do is bridge the gap in the minds of men.

Jamie named the bobcat kitten Kennedy, not only because of his close proximity to the Kennedy Space Center but also because his strong will to live is inspirational.  Just like a President inspired a nation, this little bundle of determination will inspire those who take the first steps in faith.  Like Martin Luther King said, “You don’t have to see the whole staircase;  just take the first step.”

You can take that first step to protect cats like Kennedy at CatLaws.com

Check back on this page often or sign up for our monthly e-zine for updates on all four of these bobcats. 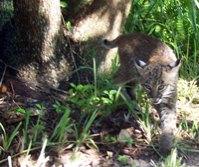 Read about some of our previous successful bobcat rescues and releases.

Read about more about our rehab and release success.

For Big Cat Rescue to give these bobcats a second chance at life we need your help!

Got a tiger living next-door? State says you don’t need to know