A Forbidding Kingdom of Snow Leopards

A Forbidding Kingdom of Snow Leopards 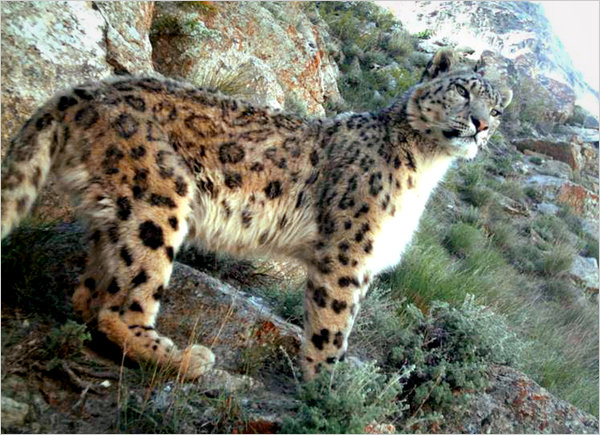 HIDE AND SEEK Studying snow leopards in Afghanistan can be challenging.

Thomas McCarthy, director of the snow leopard program for the conservation group Panthera, has spent nearly two decades crisscrossing the absurdly rugged Himalayan plateau to study a magnificent, densely furred, rosette-stenciled cat that may well be the world’s most reliable no-show.

“I’m out here in snow leopard country for half of every year,” said Dr. McCarthy by balky telephone connection from Tajikistan, “and I can easily count on one hand the number of times I just happened to see a snow leopard.”

George Schaller, the renowned biologist and environmentalist and Panthera’s vice president, is vast in experience and reputation and normally raptor-eyed. “I put radio collars on a couple of snow leopards in Mongolia,” he said. “The radio tells me where they are, I go there, I look and look. I see nothing, unless the snow leopard chooses to move.

“If a snow leopard sits quietly and doesn’t want to be seen,” Dr. Schaller said, “you won’t see it.”

To study snow leopards, Dr. McCarthy said, “you have to be very dedicated, or part crazy, or both.”

Yet for all the challenges, the dedicated crazies have carried on, and now a raft of their research is casting light on the rare, mysterious, supremely winterized alpine feline aptly nicknamed “ghost of the mountains.”

Using cannily placed motion-sensitive camera traps, scientists have amassed a wealth of snow leopard images, allowing them to estimate population numbers, identify individuals and track migrations. They’ve also gained a glimpse of the cat’s daily schedule, which seems to involve frequent bouts of territorial marking: cheek rubs, spraying with tail raised, and the digging of little divots in the ground.

Admittedly, the trap method can enrich evidence of leopardian flag planting. “Our rangers know that if you place a camera in an area that funnels the snow leopards past a large rock, the animals will want to spray the rock, and you’ve got them,” said Peter Zahler, the deputy director for Asia programs at the Wildlife Conservation Society of the Bronx Zoo.

Scientists with the conservation society reported in the current issue of The International Journal of Environmental Studies the results of what they called said were the first camera trap records of snow leopards in Afghanistan.

Based on photographs taken at 16 different locations along the vast and frigid Wakhan Corridor of northeast Afghanistan, Anthony Simms and his colleagues suggested that the region they described as “one of the most remote and isolated mountain landscapes in the world and a place of immense beauty” could well be an impressive snow leopard stronghold. “We’ve been surprised at the number of snow leopard detections captured in our survey,” Dr. Simms said in an interview. “It’s a promising sign that we may have a healthier population here than expected.”

Collars told the scientists when a female snow leopard spent several days dallying with a male. Sure enough, about 14 weeks later, the female’s collar announced that she had entered a cave fit to be a natal den.

Electronic eavesdropping also cast doubt on the stereotype of snow leopard as antisocial hermit. Evidence of two cats sitting together to eat dinner “was quite a shock to us,” Dr. McCarthy said. Beyond mating and mother-cub relationships, he said, “snow leopards are supposed to be solitary.”

Even with the plethora of new findings, scientists still have only the roughest idea of how many snow leopards are out there, or how they are faring in an increasingly humanified world with scant tolerance for other large mammals that refuse to be tamed.

Sparsely distributed across the high mountains of a dozen countries in south and central Asia, snow leopards are considered an endangered species. Researchers estimate that the population has fallen by at least 20 percent in the last 16 years and now stands somewhere between 4,500 and 7,500 free-living cats, but Dr. Schaller said, “those figures are just wild guesses.”

Get Science News From The New York Times »
Enlarge This Image

Snow leopards have always been rare, and they have the modest advantage over cousin carnivores like tigers and lions of occupying harsh habitats largely above the tree line, arable soil and easy human grasp.

To Americans, snow leopards are perhaps the most beloved members of the great cat club, the exclusive group that includes tigers, lions, jaguars and leopards. Snow leopards retain the majesty and fluid, predatory elegance of the other big cats while incorporating touches of panda-esque cuteness, the incidental result of adaptations to the cold.

They have wide, furry paws to help them move easily and silently over the snow, and an unusually long, broad tail that serves as both a balance pole for leaping and a wrap-around face muff for sleeping. Despite their name, they are not leopards or, according to a recent genetic analysis, particularly close relatives of leopards.

Snow leopards neither roar nor purr, and their vocalizations can sound remarkably similar to the yowl of a Siamese cat. As a rule, snow leopards are temperamentally calm and low-key. In contrast to many of the other great cats, Dr. Schaller said, “I don’t know of a single case of a snow leopard that would attack and kill people.”

The same, unfortunately, cannot be said of people’s livestock. One of the major threats to snow leopards is thought to be the growing number of sheep and goat herders who share the cats’ terrain, barely scratch out a living and may react to a poaching cat by shooting or beating it to death.

Applying DNA fingerprinting to snow leopard scat to reconstruct the local cat menu, researchers have seen wide variability in the incidence of livestock poaching. Among the Wakhan population in Afghanistan, snow leopards overwhelmingly stick to a diet of ibex, Marco Polo sheep and other natural prey.

In Mongolia, by contrast, about 22 percent of the resident snow leopard intake consists of domestic sheep and goats. Conservationists are working mightily to confront the problem — by helping villagers build predator-resistant corrals, organizing insurance programs to compensate herders for their losses, or to seek fresh revenue streams by, say, luring wealthy adventure tourists their way. The tourists may never see a snow leopard, but at least their dollars would help ensure that the cats were out there, quietly watching them.