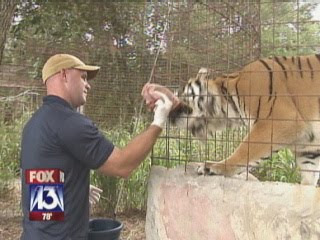 TAMPA – Big Cat Rescue’s Scott Lope gave up medicine to work on the front lines of animal rescue. For more than a decade, he has been devoted to taking care of the dozens of lions and tigers and others that call Big Cat Rescue home.

And it’s just one of the reasons he’s in the running for Animal Planet’s Hero of the Year.

He knows every cat at Big Cat Rescue by name, and their stories.

“You start when it’s dark, and you finish when it’s dark. It’s an all day affair just to get these guys taken care of,” Lope said.

Bu these days, Lope’s big cat expertise also takes him far afield, starring in TV shows such as Monster Quest, and the recent Lion Feeding Frenzy on the Discovery Channel, where the only thing between Lope, the host and a pride of hungry South African lions is a plexiglass box.

“Let me tell you, they were much scarier and much bigger than the lions we have here at Big Cat Rescue,” he said. “They had no fear coming up and sticking their nose right into those portholes. Luckily, I don’t think they could get their big paws through there.”

Shows like that are giving Lope a higher profile.

It’s also landed him as a finalist in Animal Planet’s Hero of the Year contest.

“This isn’t why I do it. I do it to help animals. But I’m now starting to realize the impact I’ve had on other people, and it makes me feel really good. Honestly. It’s awesome,” he says.

Winning the contest would mean a welcome $10,000 for Big Cat Rescue, and a trip for Lope. But he says it would mean so much more.

“To be able to get a voice, more of a voice to reach more people, and tell them what they can do to help animals,” he said.

To vote for Scott, and get more information on this year’s Fur Ball to benefit Big Cat Rescue, visit their website at http://bigcatrescue.org/