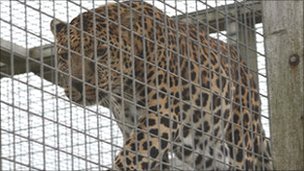 A leopard at Both Animalarium A leopard at Borth Animaliarium in Ceredigion, where the owners admitted not having correct paperwork

Nine endangered animals are to be confiscated from a Ceredigion zoo after its owners admitted displaying animals without the proper paperwork.

The animals, which include a leopard, two lynx and two ring-tailed lemurs, were found at Borth Animalarium, near Aberystwyth.

Owners Alan and Jean Mumbray admitted not having the correct paperwork for a commercial premises in court on Monday.

They were both fined and told the animals would be found new homes.

Sgt Ian Guildford, a wildlife and environmental police officer with the force, said: “The use of the licensing system to control the sale and display of protected animals is a valuable tool in the fight against the trade in endangered animals.

“Anyone who is involved in dealing with protected animals on a commercial scale such as zoos and other similar establishments should be aware of this and make every effort to comply with the legislation.
A lemur at Borth Animalarium Ring-tailed and black and white ruff lemurs were on display

“Without this, compliance loopholes are left open to those who treat endangered animals as a financial commodity.”

Nevin Hunter, of the Animal Health Wildlife Licensing and Registration Service, said the prosecution was “very significant” and showed that illegal use of endangered animals would not be tolerated.

He added: “The vast majority of zoos and animal parks in the UK do so lawfully and play an important part in conserving endangered species.

“However, those who choose to flout the regulations are on notice that we will take decisive action with police wildlife crime officers to ensure that prosecutions are taken forward.

“I commend Sgt Ian Guildford, Dyfed-Powys Police, and the Crown Prosecution Service for taking forward the case and achieving this outcome.”