We had the exact amount of keepers to get feeding and cleaning taken care of. Not much was accomplished since food prep got done after lunch.

Although we had tour cancellations, I still sent them out and it turned out OK.

Great weather today! We had just enough volunteers to get feeding and cleaning done today.

Lisa finished food-prep in the afternoon while all the other interns were on tours.

The patios at intern housing were cleaned off.

Bonnie, Des, and Brittany helped feed all the cats on the sanctuary in the afternoon since it's the end of panacur.

Armani was moved home from FunCation. It was mowed and weed-eated, then the next cat was moved in :)

Cameron and Zabu were moved home from Vacation (rather quickly). It was mowed and a new tree was put in. Then the Texas were very happy to be moved into Vacation.

Little White Dove was put back outside. She and Running Bear have been moved to the enclosure next to Apollo. They only have access to the front for the time being.

New trees were planted along the path between Vacation and Nikki lion. They have a drip line that goes off every time the vulture sprayers do, so we shouldn't have to worry about watering them.

The gutters around the staff offices were cleaned out.

Victor and Randal buried some more cable lines along the tour path from Manny to Tonga. Everyone got to chip in and help fill the trench they had to make.

Though feeding and cleaning were done on time projects took up most of the day so food prep and chores kept us here late.

Great day today hot, but had a breeze.

Feeding and cleaning got done in a good time frame, food prep happened later in the day.

Lots of tours and guests today.

Thanks to Sue R for staying to back up a tour.

We have work groups on Saturday and Sunday. Saturday is a vacationing cat's enclosure. Sunday is Tonga's enclosure.

That's it for me, Kathryn

Then and Now: Trees at Big Cat Rescue

This video is less than one minute and shows a comparison of what the sanctuary lands looked like before we started planting trees and what it looks like now. 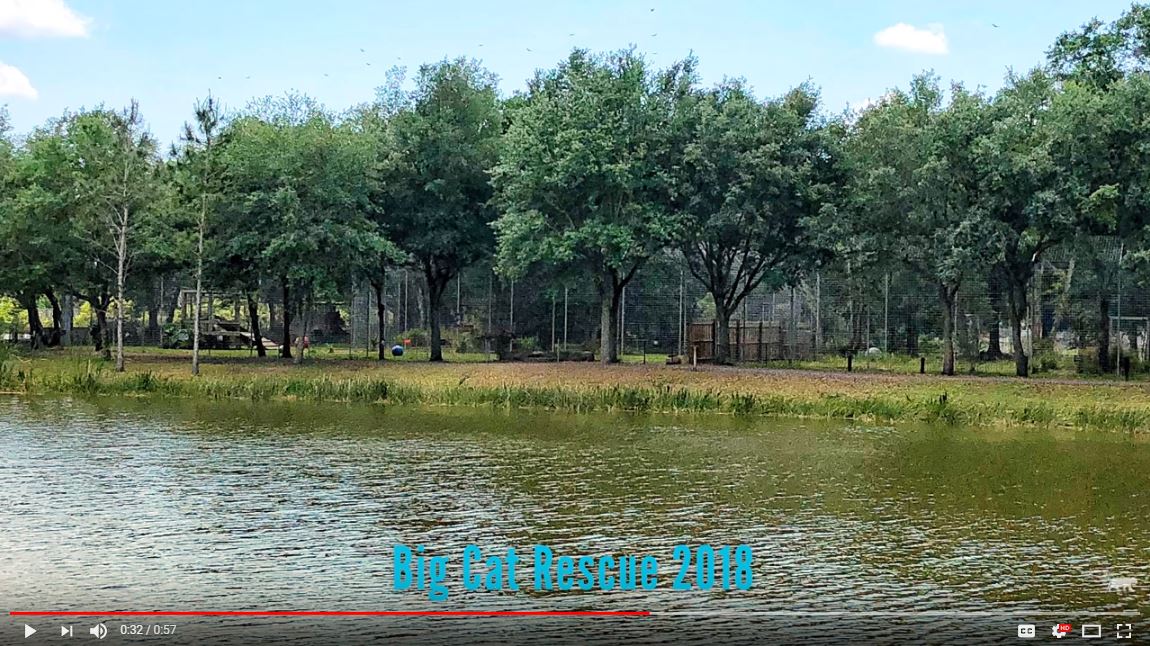 In early April 2018 Keepers noted that Little White Dove wasn't eating well so on April 6th she was brought in to see the vet. She will be 21 years old next month, which is about twice as long as bobcats usually live, but until now she's been the picture of health and bobcat ferocity.

Little White Dove is one of the most fierce little bobcats I've ever had the pleasure to know and being kept confined in the hospital is something we knew she'd hate, but we had to give her sub q fluids and monitor her food and water intake very closely. We tried every kind of food but she's not eating more than a few ounces a day.

We have to consider that it could actually be her kidneys, and not the bad teeth, that were causing her to turn her nose up at food. Kidney failure makes cats feel nauseous. As one last resort, we moved her back out into her cat-a-tat with her life long mate, Running Bear. He's tippy-toeing around her, because he's not sure what's up, and she's enjoying being outside again.

She's still not eating enough though, so the vets are prescribing another change in her meds to see if she starts to feel better. If not, we will have to make the sad decision to euthanize her. That is never a choice we make lightly as we take all factors into consideration, especially her quality of life. 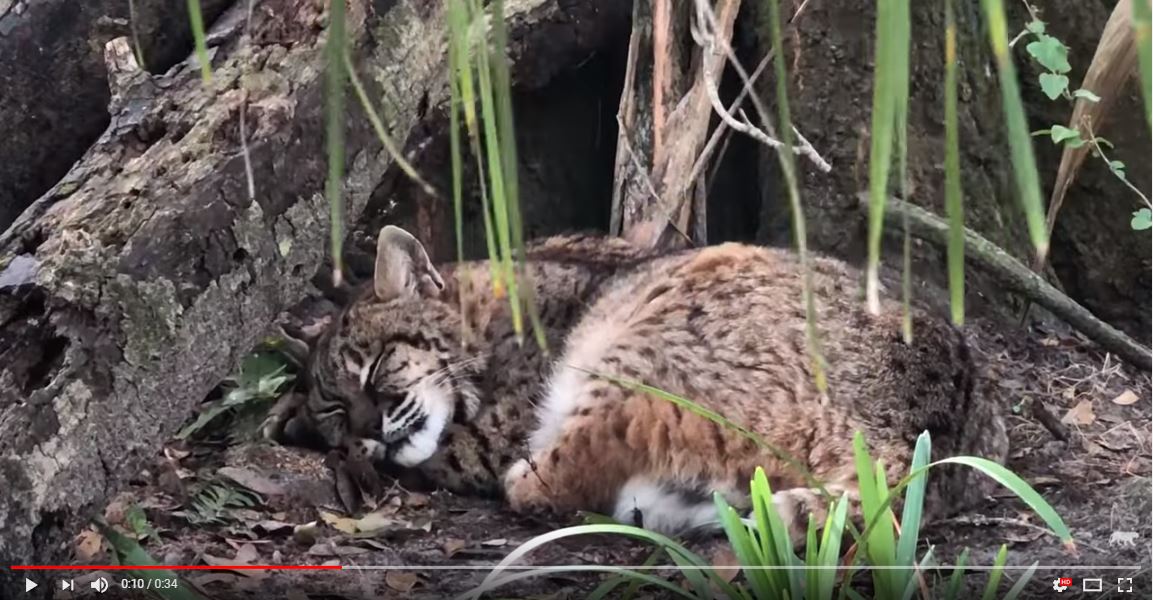 How Do I Make the Call of the Wild?

Making the Call of the Wild is so quick and easy to do yet is one of the most important things people can do to save big cats and their babies from a life of abuse and deprivation.

It really baffles me that so many people contact us all the time asking we save this cat or that cat from a horrible situation but so few are willing to step up to the plate and give two minutes of their time to actually make a difference doing something as simple as making a phone call and leaving a message.

Change will not happen until ALL OF US start making this action a priority!! 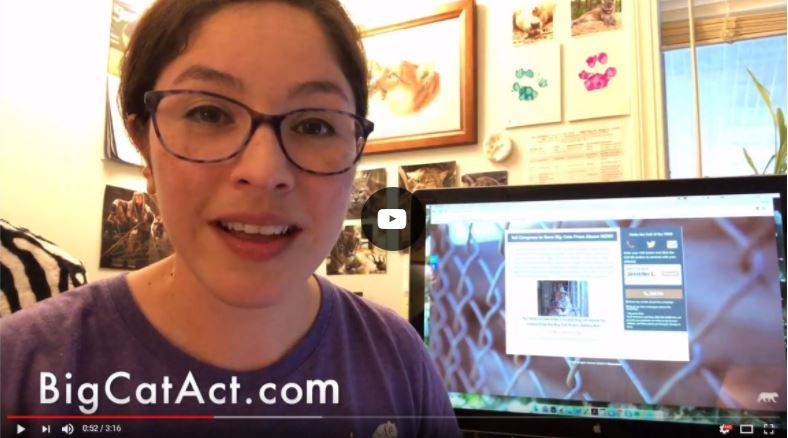 We ask people to make the Call of the Wild at least once a week.

Last week the following Representatives were contacted the most.

If YOUR State’s Representative is not on the above list, YOU CAN CHANGE THAT by making the Call of the Wild yourself and by asking your friends and family to make the call too.

Do YOU REALLY WANT the abuse and exploitation of big cats and their babies to stop? Yes? Then, PLEASE, make the Call of the Wild? It takes two minutes of your time.

We realize it can be scary to make the first call, but once you do you will be amazed at how easy it really is and you will wonder why you thought it was so scary.

Come on, leap on over to BigCatAct.com and Make the Call of the Wild to help save big cats and their babies. YOU CAN DO IT!! I KNOW YOU CAN!!

Big Hank has a new fan!!

Will YOU Help Rescue Circus Cats from Guatemala!!

UPDATE: In the first nine days of April 2018 $6,500 have been raised in Facebook fundraisers for Big Cat Rescue to contribute to this Huge rescue.

REMINDER: All funds raised in Facebook fundraisers for Big Cat Rescue during the month of April 2018 will be earmarked for this rescue effort.

In April 2017 the South American country of Guatemala banned the use of wild animals in circuses. Guatemalan authorities gave the circuses one year to surrender their animals to sanctuaries or wildlife rehab centers, both national and international. The deadline of April 11, 2018 came and the vast majority of the animals are still in need of rescuing. We need your help now to save these tigers, lions and cougars! Big Cat Rescue is working closely with Animal Defenders International (ADI), Tigers in America and other rescue groups to save the 70+ lions, tigers and cougars and approximately 10+ other animals (camels, spider monkeys, llamas, porcupines and goats) now languishing in small cages in Guatemala. You may recall that Big Cat Rescue worked with ADI to provide a new home to Hoover tiger in April 2015 after ADI rescued him from a circus in Peru.

Big Cat Rescue will take in at least 3 or 4 of the big cats and will help ADI find appropriate sanctuaries to rehome the rest of the animals. The animals may be relocated to the United States, South Africa or other countries.

This is not going to be a quick or easy rescue effort. There are many moving parts and it could take a year to get all of the animals out of Guatemala, and things could go south and it doesn’t happen at all. But we need to start raising funds NOW so ADI can get their temporary rescue facility up and running and ready to start accepting animals. The costs for this include construction of the ADI temporary facility, cages, power, lights, security, food, veterinary team, animal care team, etc. Then the next costs are for permits, transport cages, airline transport to their new homes, etc.

April marks 2 years since we took in Hoover, the former circus tiger from Peru. In Hoover’s honor, can we count on you to make a donation to help these 70+ circus cats in Guatemala find new forever homes like our Hoover? Thank you!!

You can donate toward this project at https://BigCatRescue.org/circusban

With VERY LITTLE EFFORT, and NO COST TO YOU, you can also help raise funds for the project by setting a Facebook Fundraiser for Big Cat Rescue. It is REALLY EASY to do!! See how at https://BigCatRescue.org/facebook-fundraiser/ Inspirational, Adjustable, Meaningful. These elegant, natural, semi-precious beads can be jewelry or meditation and prayer beads. A sturdy stretch band lets this bracelet fit men's and women's wrists up to 7.5”

Be a Big Cat's Best Friend! You're contributing to protecting endangered tigers and other big cats. Show you care by sporting real semi-precious gem beads from Big Cat Rescue
Give the Gift of Hope: Enjoy some simple, affordable luxury for yourself, a spouse, child or friend, while knowing a charity benefits from your choice.

Save a big cat while with style!

For Men, Women, Teens on Up: Classic, ageless jewelry is appropriate for most all ages! The quietly classy round beads in a range of rich hues will complement any occasion, from yoga class to that special occasion

Keep a Big Cat In Your Pocket: Zip up coins, ID, makeup, any small items you want to keep safely together in this slim, unique pouch. It’s compact, perfect for travel, and best of all, they’re washable!

Who couldn’t use slim, one-piece organization? Whether it’s popped into a purse, a pocket, a backpack; kids on up can enjoy lightweight, durable convenience.

Be The Change You’re Looking For! You're contributing to protecting endangered big cats. Show you care by owning your own fabric big cat coin pouch from Big Cat Rescue, or giving a useful gift.

Lions And Tigers And Leopards, Oh My! These animal coin pouches are both cute, with perky ears poking up on each side of the zipper closure, and regal enough for to lend a touch of dignity. Have you missed any of our recent Facebook LIVE videos such as Carole's Walkabouts or the cats going on vacation or the funny kitten antics in the Kitten Cabana?  Find them all at https://www.facebook.com/bigcatrescue/videos/

Have you missed any of the recent photos we posted on Facebook?  Sheena, Priya, Sundari, Skipper, Seth, Tiger Lilly, Manny, MaryAnn, Ares & Orion, and more?  Find them all at https://www.facebook.com/pg/bigcatrescue/photos/