BANGKOK, Jan 22 (IPS) – An international campaign to save the tiger, one of Asia’s iconic wild animals, is proving to be fertile ground for the World Bank to earn its stripes as an institution keen on joining the ranks of conservationists.

Senior officials from the international financial institution’s Washington DC headquarters will be jetting to Thailand to attend the Asia Ministerial Conference on Tiger Conservation, which runs from Jan. 27-29 in Hua Hin, a beach resort town south of Bangkok.

The ministerial meeting in Thailand is the penultimate conference on the road to a heads of state meeting in Vladivostok in September this year. Robert Zoellick, the Bank’s president, is billed to co-chair the tiger summit with Russian Prime Minister Vladmir Putin.

”We are witnessing the power of the World Bank to bring governments together through its involvement,” Mike Baltzer, leader of the World Wildlife Fund’s (WWF) tiger initiative, told journalists this week. ”The Bank has funded 1.5 million U.S. dollars to train officers in some tiger-range countries.”

The Bank’s move into tiger territory was unveiled in June 2008 with the launch of the Global Tiger Initiative (GTI), which pledges to place the concerns of tiger conservation on the international political agenda and to take a lead role in conservation efforts.

”The Bank hopes to invest in high-priority conservation actions, ensure that its own infrastructure investments do not damage tiger populations, and support investigations and economic analyses of key issues such as poaching and habitat conversion,” states WWF, the world’s largest conservation organisation, in a background note ahead of the Hua Hin meeting. ”This is believed to be the first time in the Bank’s history that it has undertaken such a major and focused initiative targeting a single species.”

Laos, one of the 13 Asian countries home to wild tigers, offers visible signs of the Bank’s new interest in the wild tiger. It is backing an awareness campaign featuring billboards with an image of the endangered animal at the international airport in Vientiane. A message to stop illegal wildlife trade appears on each sign.

The billboards and stickers with a similar message that appear on the ubiquitous three-wheeled taxis û or ‘tuk-tuks’ as they are called locally û in the Lao capital were unveiled by the Bank in November last year.

The World Bank office in Laos provides support to Laos through the Global Tiger Initiative, Victoria Minoian, a Bank spokeswoman at the Vientiane office, said. The Bank has also been co-sponsoring the Lao Campaign for Wildlife Conservation, which involves the government, non-governmental organisations and the private sector, she added. The GTI has allocated 15,000 dollars to support this wildlife campaign.

Yet the Bank’s aim to expand its portfolio by taking on the cause of the conservationists is drawing criticism from some environmentalists, given the financial institution’s history in funding large projects in developing countries û such as mega-dams — that have seen wanton destruction of the environment and affected livelihoods of local residents.

”The World Bank’s past record has left a trail of ecosystem destruction behind virtually every large project it has financed,” charged Bittu Sahgal, editor of ‘Sanctuary Asia’, one of India’s leading wildlife news magazines. ”Today tigers (in India) survive largely in the precise areas where World Bank money has been kept at arm’s length.”

The Bank’s involvement to save the wild tiger is ”worse than greenwashing,” he told IPS in an e-mail interview. ”They are looking to pull off a public opinion coup. While they say they want to help tigers, they are simultaneously cajoling the Indian government to accept loans in excess of one billion U.S. dollars for highways and mines that will destroy tiger and wildlife habitats.”

But the Bank’s role is not all that conservationists supporting the tiger summit are hoping to draw mileage out of.

The timing of this year’s meetings has added symbolism for Asia, because Feb. 14 marks the start of the Year of the Tiger in the Chinese lunar calendar. The current wild tiger population is estimated at 3,200, which is half the number, between 5,000 to 7,000 wild tigers, that conservationists estimated were around when the Year of the Tiger was last celebrated 12 years ago.

”It is now or never,” said James Compton, Asia programmes director of TRAFFIC, a global wildlife monitoring network. ”I don’t think there has been similar international attention and signs of political will towards tiger conservation ever.”

Among the expected goals to come out of this World Bank-led effort is for countries to implement strong enforcement programmes that will ”knock off the big illegal wildlife trader”, Compton said in an IPS interview. ”There has to be good law enforcement to detect and prosecute those involved in driving the trafficking trade.”

Almost every part of the tiger feeds the global illegal wildlife trade, which is reported to be the third largest illegal trade after arms and drugs. Interpol estimates the annual value of the trade to be between 10 to 20 billion dollars.

”Illegal trade is not going away. It has remained persistent,” revealed Compton. ”If you look at the pattern of seizures (of wild tiger parts), all tiger-range countries are implicated. It has a long trade chain.”

China and increasingly Vietnam are often fingered for driving the demand for tiger parts. Besides tiger skin often given as gifts, tiger bones are used for wines and powdered Chinese medicines, and tiger penis is sought as an aphrodisiac.

It explains the rapid drop in the wild tiger population in South-east Asia, from Burma on one end, to Cambodia, Laos, Malaysia, Thailand, Vietnam, Malaysia and Indonesia at the other. The other tiger ranges are in Bangladesh, Bhutan, China, India, Nepal and Russia.

A commitment to protect and expand these forest ranges tigers inhabit is also a benchmark the tiger summit is expected to strike. ”According to tiger experts, the wild tigers may disappear by the next Year of the Tiger in 2022, if no action is taken to stop the poaching and illegal hunting, and to enhance habitat protection,” states the WWF.

A dream come true for volunteers

What will happen to Norman Buwalda’s tiger?

After leopards, a tiger attack in Nashik 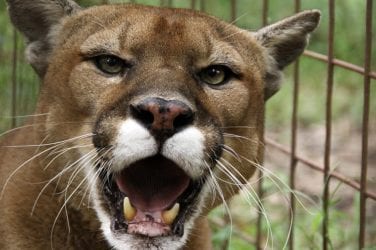 Big Cat Updates Wyeth & Nova, Rehab Bobcats are both outside in the New ...