Devin Saari was the coordinator for yesterday and he said, "Today was an awesome day!  We had just enough volunteers to get cleaning and feeding done. The cats are being fasted tomorrow for flea treatment on Thursday so only a few of the cats have diets for tomorrow.  The reason we do that is because to get them to take their pill that has their provecto in it we need to make sure they are good and hungry so they eat it because we don't want fleas biting our cats.

A few projects were completed today.  The sticks and branches from the first rehab cage were taken out.  Around both hospitals it was mowed, weedeated, and the sawgrass was removed.

We had two tours today with lots of happy guests!  And all of the cats who are usually pretty picky about their eating, they ate well today.

That's all for me, says Devin.

I hope you will tune in tomorrow to see more at Big Cat News on your Alexa device. 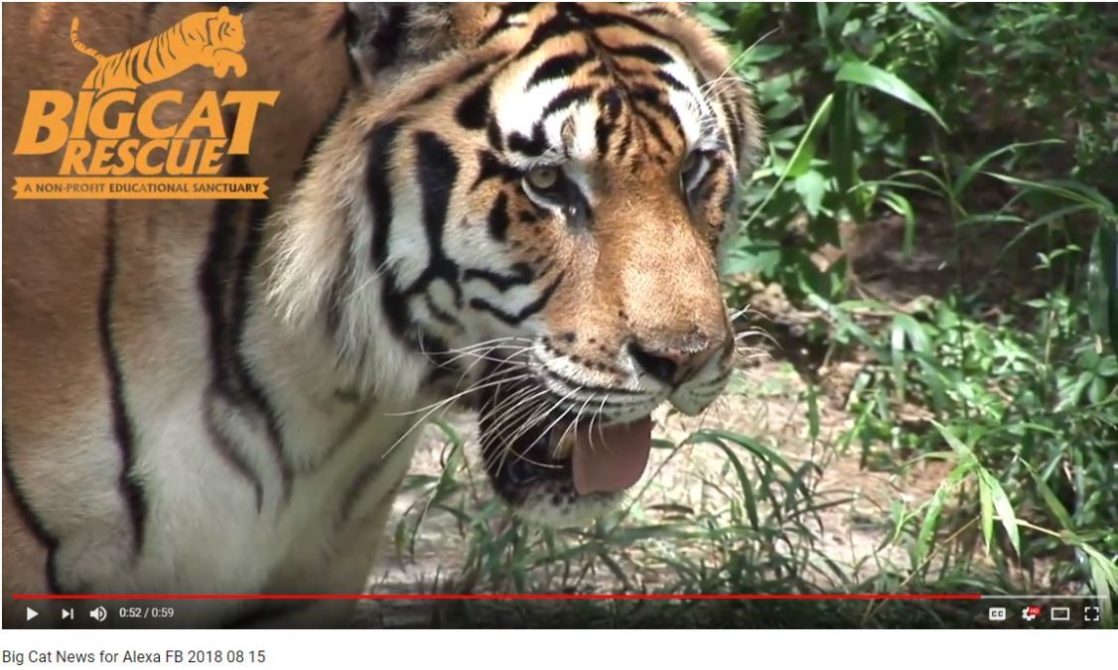 If you missed the previous days, you can catch up on Big Cat News - Alexa Flash Briefing videos at https://www.youtube.com/channel/UCCPv8ivo6o4CZHFifkfRYDw

Part 6 of 8: Why Regulating Conditions Under Which Big Cats Are Kept SIMPLY DOES NOT and CANNOT WORK

Bans are the only solution. Allowing private ownership of big cats is dangerous to humans and because effective regulation of the conditions under which they are kept is simply impossible, private ownership results in thousands of these animals being kept in deplorable conditions.

Changes in commonly accepted social values start with a few people having a different view. The new view catches on slowly at first, then builds momentum over time until a majority of people adopt the new view and it becomes the social norm. The idea that women should have the right to vote was at first a subject of ridicule. It took decades to win over enough minds and hearts to make it a majority view, and today we take it for granted.

A very similar process is happening at an accelerating rate in our society, and around the world, with respect to exotic animals. The old view is that these animals are unfeeling objects, to be used as we see fit. Increasingly people now recognize that these are intelligent animals with a range of feelings much like those of humans and that we have a responsibility to treat these majestic animals in a way that meets their physical and psychological needs.

There are two compelling arguments for banning private ownership of big cats.

ONE: The first is a simple fact that trying to regulate the conditions under which they are kept is totally impossible. Overwhelming evidence shows that despite the regulations there are thousands of animals kept in inhumane conditions.

TWO: The second reason, recognized by a large and rapidly growing segment of our population, is that banning private ownership is simply “the right thing to do.”

These wild animals should not be pets or used for entertainment or for financial gain. We should not be keeping them in small prison cells or carting them around in small cages for the financial gain of a few or to satisfy the egos of those who selfishly want to generate attention by having them as “pets.”

Our efforts should be spent on preserving these threatened and endangered species in the wild where they belong.