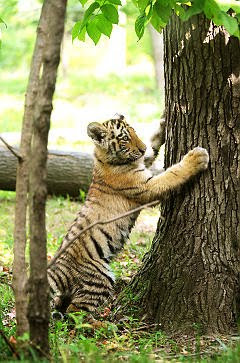 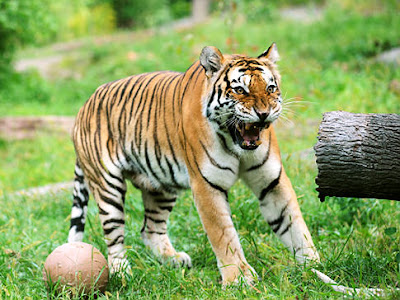 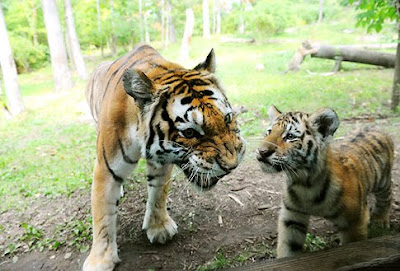 A baby boom in the Bronx has produced two sets of tiger triplets, and the Daily News has the first look at the feline furballs.

The six kitty carnivores – five males and one female – make their public debut at the Wildlife Conservation Society’s Bronx Zoo on Thursday.

The Malayan and Amur tigers will be displayed at the Tiger Mountain exhibit, but only the Amur litter will be watched over by their mother.

The Malayan cubs, the first ever on display at the zoo, have been on their own since their mother, Berapi, stopped nursing them weeks after giving birth.

“She just kind of woke up one day and decided she didn’t want to take care of them anymore,” said Jim Breheny, director of the Bronx Zoo.

“If it had happened in the wild the cubs would have perished. These guys were lucky that they were here.”

The zoo stepped in, feeding the helpless cubs a gruel of meat and milk while Berapi went on exhibit in a separate area.

“Even though they’re not with their mom, they have each other for comfort and security,” Breheny said.

The lucky Amur triplets have a devoted mother, 300-pound Sasha, and are still nursing.

“It’s really great just to watch her and how protective she is over those cubs, how she’s watching us and watching them, just like a mom at a playground,” Breheny said.

The zoo hasn’t had Amur cubs in more than a decade, but not for lack of trying.

Sasha was paired with two previous potential mates by the Species Survival Plan, a cooperative effort among zoos nationwide that promotes genetic diversity among captive populations.

There was no love match.

“It’s just not as simple as putting ingredient A and ingredient B together in a jar and shaking it up and getting a product,” Breheny said.

When Sasha met the triplets’ father, Bachuta, it was lust at first sight. The frisky felines mated the day they met.

“It’s just not as simple as putting ingredient A and ingredient B together in a jar and shaking it up and getting a product,” Breheny said.

When Sasha met the triplets’ father, Bachuta, it was lust at first sight. The frisky felines mated the day they met.

The Amur cubs were born on May 22, the Malayan cubs on April 5.

Two of the Amur cubs are named Julian and Josie, while two of the Malayan cubs have been named Pepino and Claiborne. The zoo will name the other two cubs soon.