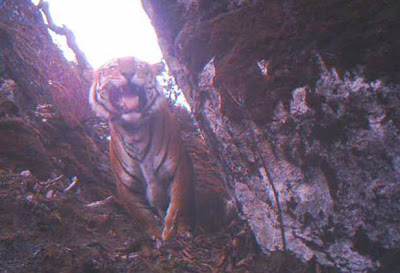 A Bengal tiger prowls at an altitude of 13,000ft in the mountains of Bhutan

A British film crew has recorded rare footage of tigers high in the mountains of Bhutan, giving hope to conservationists who plan to link Asia’s shrinking populations of the big cats.

A team from the BBC’s Natural History Unit spent six weeks trying to film the elusive animals. One of the cameramen, Gordon Buchanan, said he was reduced to tears by the grainy images captured by his lens. “It was beyond words [and] pretty overwhelming,” he added. “The purpose of the expedition was to film evidence of tigers living in Bhutan so all the effort and everything we did came down to a few seconds of footage.”

The documentary team wedged hidden cameras into gullies and trees during their expedition to the Himalayan kingdom. They filmed Bengal tigers prowling at 13,000ft above sea level, more than twice the height of Ben Nevis. Their remote existence means that the world’s biggest cat, Panthera tigris, may be able to survive away from human encroachment. Tigers once roamed from Turkey to eastern Russia but their numbers have dwindled by 95 per cent since 1900 because of hunting, loss of habitats and poaching. As few as 3,000 remain in the wild and are under threat of extinction.

In an effort to create a genetically viable tiger population, the Wildlife Conservation Society and the Panthera Foundation hope to establish a 5,000-mile corridor spanning eight countries from Bhutan to Burma which would allow tigers to move freely across their largest remaining block of habitat. Bhutan has one of the smallest tiger populations, estimated at between 67 and 81 adults. Mr Buchanan said his team was convinced the tigers they saw were breeding, and that there must be cubs in the mountains that potentially gave the species a future. “I have spent time working with tigers in India and looking for them in Russia and they face problems pretty much everywhere,” he added. “But Bhutan is so wild poachers would find it very difficult to hunt them there.”

Alan Rabinowitz, a biologist, said: “Tigers are thought of as jungle creatures yet we now know they can live and breed at this altitude, which is a safer habitat for them. Bhutan was the missing link in this tiger corridor.”

‘Lost Land Of The Tiger’ starts at 9pm on BBC1 tomorrow (except Scotland).

A first: UP to get exclusive force to protect wildlife