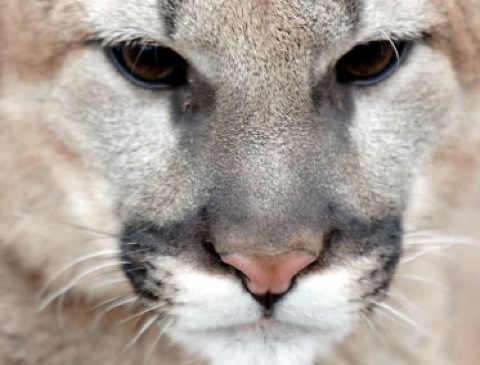 The appearance of a mountain lion Tuesday near downtown Berkeley, Calif., caused a stir in this animal-loving, environmentally conscious community, where residents may obsess about locally grown organic food but don’t expect to be on the menu.

The mountain lion, a 100-pound female, was spotted around 2 a.m. Tuesday in the city’s Gourmet Ghetto district, according to the Berkeley Police Department.

The cougar roamed within pouncing range of Alice Waters’s Chez Panisse restaurant, the temple of California cuisine, where twice-cooked kid goat with cumin, ginger, eggplant, and chickpeas was the featured dish that evening. But the state’s top-level predator probably was on the hunt for venison and got lost, according to wildlife experts.

“A mountain lion traveling through an urban environment is infrequent but looking at aerial photographs of the surrounding area you can see why it chose Berkeley,” said Marc Kenyon, the statewide mountain lion program coordinator for the California Department of Fish and Game.

The reason: deer, the mountain lion’s main prey. Berkeley is wedged between San Francisco Bay and sylvan foothills that abut miles of forested parkland. It’s a mountain lion smorgasbord with cougar chow wandering the hills and valleys. (On Wednesday morning, for instance, I walked out of my hillside house to find a pack of deer ambling down the street.)

“Where there are deer, mountain lions not far behind,” noted Mr. Kenyon. “The mountain lion might have been following a deer down the hill and at one point turned off a path and spotted a raccoon and decided to chase that raccoon and got turned around and walked west toward the city instead of east toward the hills.”

More than half of California is classified as mountain lion habitat by the Department of Fish and Game, which estimates there are between 4,000 and 6,000 of the animals in the state. California voters banned the hunting of mountain lions for sport in 1990.

While reports of mountain lion sightings have been growing as human development expands into the animal’s habitat, Mr. Kenyon said the number of mountain lions actually is thought to be falling statewide due to a decline in deer population in some regions.
Map More than half of California is classified as mountain lion habitat (above, in red), according to the state’s Department of Fish and Game.

Such encounters usually do not end well for the mountain lion, though. In Berkeley, police officers tracked the cougar as it ran through the surrounding residential neighborhood for an hour, jumping over fences from backyard to backyard. According to news reports, an officer shot and killed the animal at 3:30 a.m.

The incident unleashed a Berkeley-style debate on Berkeleyside, a local blog, over whether the mountain lion should have been killed.

“Was this animal a threat?” asked one commenter. “Seems to me it was wandering streets, not attacking anything or anyone. Just trying to find it’s way home until it started being chased by police.”

Mr. Dunbar, however, said officers had little choice in how to handle the cougar.

“I’m not sure they could have done anything differently,” he said. “There’s a big difference in a mountain lion that’s been treed and you have time to think what you’re going to do and one running around a neighborhood at 3 in the morning.”

At the Cheeseboard Pizza Collective in the Gourmet Ghetto, patrons Wednesday evening were chattering about the mountain lion in their midst, with some expressing relief that it was gone.

But Mr. Dunbar noted that while mountain lions are solitary creatures that avoid human contact, they will continue to roam the Bay Area’s urban fringe.

“I’m not sure if they’ll have another occurrence in the near future, especially if that was the resident lion of that area,” he said. “But there may be another mountain lion that comes in and tries to take over the territory.”

Another Child Killed by Leopard

JAIPUR: In a sign of intensifying man-animal conflict in parts of Rajasthan, four persons ...

BCR March 11, 2012
0 comments 0 Shares
Big Cat Rescue is a 501(c)(3) nonprofit organization, FEID 59-3330495. Florida law requires that all charities soliciting donations disclose their registration number and the percentage of your donation that goes to the cause and the amount that goes to the solicitor. We do not utilize professional solicitors, so 0% of your donation goes to a professional solicitor, 100% goes to Big Cat Rescue. Non-program expenses are funded from tour income, so 100% of your donations go to supporting the cats and stopping the abuse.