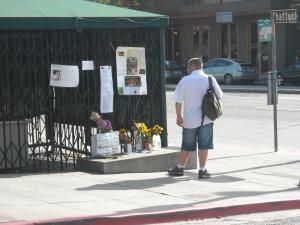 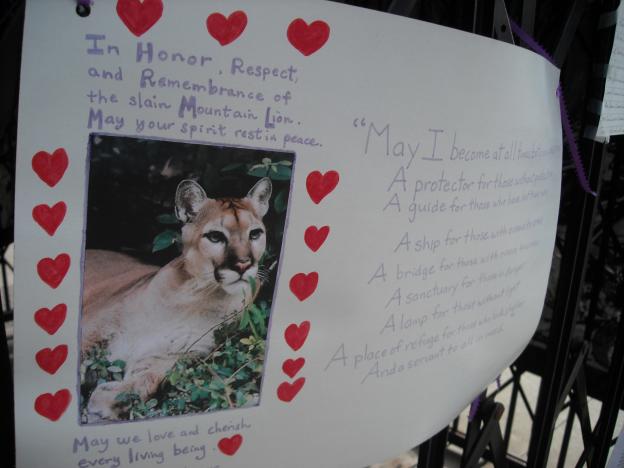 Jacob Sockness checks out the memorial to a mountain lion shot to death by Berkeley police.

They’re an occasional sight along streets in tough neighborhoods — makeshift memorials of flowers, notes and well-wishes for victims of gunfire. But a shrine for a mountain lion killed by police? Only in Berkeley.

Police shot the cougar early Aug. 31 as it roamed a neighborhood near the city’s famed Gourmet Ghetto. Police said it posed a public-safety threat for night-shift workers coming and going and for sleeping homeless people.

But a number of people have voiced their disapproval at a memorial put up at the corner of Shattuck Avenue and Cedar Street, not far from where the cat was first spotted. Included was a montage of facts about the animals and a front-page Chronicle story about the killing.

“In honor, respect and remembrance of the innocent and helpless mountain lion that was slain in Berkeley,” someone wrote alongside a picture of a cougar that was alive and well.

“May we protect our wildlife,” another person printed out on a piece of paper. “If we save them, we save ourselves. ‘Thou shalt not kill?’ Remember?”

But one person defended the actions of the officers.

“Thank you Berkeley police for all the times — including this one — that you’ve done the right thing for the safety of Berkeley residents, even when it’s dangerous, unpleasant and unpopular with a certain crowd. To anyone who thinks the police should have dithered around until a zookeeper could show up with a dart gun, what would you say to the family of someone who became the lion’s dinner? ‘Gee, too bad, but we’re all connected in the circle of life???’ “

Several passers-by said they would have preferred it if the cat hadn’t been killed.

“If it’s just looking for new territory, then relocating probably would have been a better idea, because usually they’re pretty shy animals,” said Jacob Sockness, 27, of San Francisco.

Perhaps Melissa, 29, of Berkeley, who wouldn’t give her last name, said it best: “It’s in the spirit of Berkeley to have compassion for animals.”

Bobcat May be to Blame for Pet Deaths – abc Video

Bobcat May be to Blame for Pet Deaths - abc Video