Where the ‘Wild’ Things Are

Tigers, Other Exotic Animals Should Not Be in Traveling Shows, Kids Say

There is a big debate across the country about whether large exotic animals — a label that includes lions, tigers, bears and elephants — should be part of the traveling shows at fairs, carnivals and circuses.

What do you think? Are traveling animal shows a good idea?

Supporters say the shows are educational and allow people to see animals they might never see otherwise. Those who make a living by bringing lions, tigers and bears to local communities say these animals were born and raised in captivity. Zoos are overcrowded, they say, and these show animals can’t be released into the wild because they never learned the necessary survival skills.

Opponents say traveling shows are stressful for the animals. People crowd too close, and small enclosures don’t give large animals freedom of movement. For example, lions and tigers in the wild have territories that of as much as 400 square miles; those in traveling shows are often kept in trailer-size cages.

That is what prompted Eliana Bookbinder, 10, to take action. When she saw that a local furniture company sponsored a tiger exhibit at the 2004 Charles County Fair, she asked: “What do tigers have to do with selling couches?”

Eliana was so concerned that she wrote to county officials and the owner of the company.

“I think it is really unfair to have tigers in a cage where they can’t run and they only have a log to climb on,” she wrote. “Besides, it was very hot in the sun. Tigers live in the jungle. They’re used to shade.”

Then she asked: “Why don’t you give the tigers to a zoo or rescue foundation where they’ll take better care of them?”

A year later, Eliana’s letters remained unanswered. The big-cat exhibit returned to the fair last summer — with lions this time — but without the furniture company’s sponsorship.

Eliana next organized a peaceful protest. She and her family and friends took turns sitting in a homemade cage with bars made of black elastic. A sign outside the cage read: “Not good for me, not good for them.”

The kids collected more than 300 signatures from people asking the county fair to ban such exhibits. (They also passed out fliers and raised money for a big-cat rescue sanctuary in Florida .) It’s too soon to know whether their effort will be successful.

If communities prohibit traveling animal shows, where will those animals go?

The Humane Society of the United States estimates that there are 5,000 to 7,000 tigers in this country, 10 percent of them in well-kept zoos and sanctuaries. Many of the rest are with untrained people who often give them poor or improper care, the society says.

In the past six years the Big Cat Rescue Society in Tampa , Florida , was asked to find homes for nearly 700 animals but had room for only 52.

If exotic animals are removed from traveling shows, the number raised in captivity might decrease because there will be less demand for the big cats.

Interested in taking action online to help animals? Then join our online community and sign up for our Humane Action Network. Go to www.hsus.org/join or www.CatLaws.com

The story behind the story:

Our Roots & Shoots group, the Planet Protectors, had a booth at the Charles County Fair in La Plata, Maryland, for 3 days this past weekend. We had a mock cage (hinged 4′ squares of 2x4s, with 1/2 inch black elastic as “bars”), and kids and a couple of parents took turns sitting in the cage with a sign proclaiming “Not Good For Me, Not Good For Them.” We had a wonderful quote from Jane Goodall, and a blown up copy of Eliana’s letter to Value City Furniture asking them not to sponsor cat shows any more.

We also had a table where we distributed wild tiger info that we got from Save the Tiger Fund and sold cute tiger hats and temporary tattoos. We had a letter to the Fair Board that kids could sign asking for an end to large cat exhibits at the fair, and a letter to the county commissioners that adults could sign asking for a ban on travelling exhibits of exotic cats. Parents approached passers by and explained that an 8 year old girl was disturbed last year by the tiger exhibit, and wrote a letter to the corporate sponsor – Value City Furniture – which decided not to sponsor the big cat exhibit again.
However, the fair decided to bring the cats back, even without a sponsor, so the kids decided that they had to do something to help. We collected about 200 kids’ signatures and 130 or so adult signatures (a lot of the parents were too busy helping their kids to sign, keeping an eye on everyone, etc. to sign the letter themselves). We raised around $200 for Big Cat Rescue, and talked a lot about how dangerous and inhumane the privately owned tiger phenomenon can be. It was astonishing to see that disapproval of the tiger exhibit was – just about every conceivable demographic participated in signing letters and buying hats or making donations.

When the fair board first found out that we were protesting the big cat exhibit, they talked about whether to throw us out, but a brief discussion of the First Amendment, together with overall good manners, put an end to that. We also made sure to say nothing at all negative about the man running the exhibit, since from everything I’ve heard, he has a pretty good track record with his animals. We talked instead about how there are 15,000 privately owned tigers in the US, and how the business is dirty and cruel, even if this particular enterprise was not.

The kids are setting up meetings with the fair board and the county commissioners to deliver the signed letters, and we will forward our donation soon. I’ll get my husband to forward photos from his office, since photos and dialup are not a good combination. All in all, it was a great civics lesson! 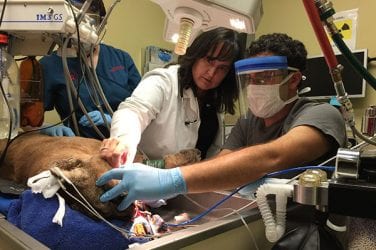 Why Do You Turn the Cameras Off? That’s the question I am frequently asked, ...

The Jaguar Trust Jamie and Justin were in Guyana for ten days setting new ...