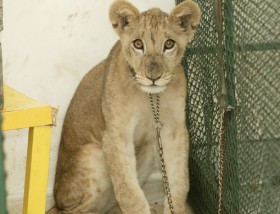 Dubai: Wild animals from unknown origins could carry a risk of disease to other animals and humans, said the director of Dubai Zoo.

Animals usually brought into a zoo are vaccinated for rabies and other distemper diseases, which could be transmitted to humans through cuts and scratches.

The origin of the five lions and a cheetah being kept in a residential flat in the northern emirates is not yet known but their keeper claims they are being adequately cared for and are regularly seen by a veterinarian.

Dr Reza Khan, director of Dubai Zoo, said there is no space for them at Dubai Zoo but perhaps a zoo of some other emirate could house them. “Usually animals that come to the zoo are vaccinated for rabies. There are four combined medicines …. We are very careful at the zoo because they are in close proximity and we don’t want disease, if any, to spread,” he said.

He said that cats usually carry a lot of tics and mites.

If not cleaned properly and looked after, lions in a residential setting can be terrible for house owner and the animals. “The floor should be cleaned everyday and disinfected every week,” said Khan.

Khan stressed that private ownership is not allowed. Lions, he added, are dangerous animals that cannot be tamed or controlled. “Ten years ago there were many private collections of wild animals but the trend has stopped. Illegal trading has stopped so I really don’t know where these have trickled in from,” said Khan.

When animals enter the country for zoological purpose they usually spend three months in quarantine to check for diseases. “We check the blood and stools, and treat the tics and mites so they don’t transmit to other animals,” said Khan.

“I don’t know if these cubs have been vaccinated but the biggest danger for them is confinement and boredom. Sitting on a concrete floor can cause arthritis from not moving,” he said.