How Can Big Cat Rescue Offer Effective Self Guided Tours?

Is there a way to allow people to visit during regular business hours and still get our message across to them that wild cats don’t belong in cages?  This tour experience is something we have been trying to figure out from the early days of the sanctuary. Originally the reason was so that people could experience what it is like to be in a cage, with the cats having much more space and freedom than the human.  In the following layout, the humans are confined to a narrow space that is a solid wall on one side and a 10′ high cage wall between them and the wall of the cats’ cages.

The question is, “Can we do this in a way that still conveys our message and is safe and comfortable for the cats?”

What do you think? 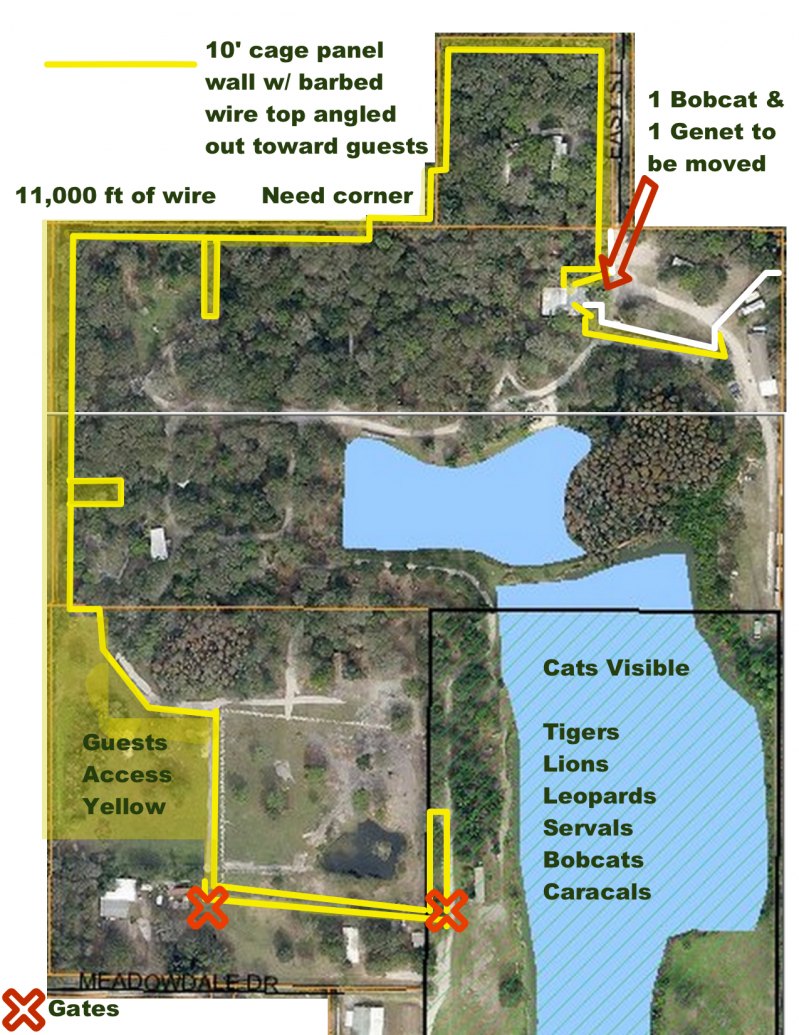 In this layout, the idea would be that we wouldn’t have to give guided tours, but rather could just set visitors out into an area that is bounded on the outside by our perimeter wall and then a 10 foot high wall w/ a barbed wire cantilever facing out toward the visitor where the bright yellow lines are.

The current obstacles are:

1. Baby cakes and Breezy Bobcat would have to be relocated as they would all be in the guest area shaded yellow.

2. Rehab area would have to be relocated to southern end of our property, which we were planning to do anyway.

3. There is not enough room to get behind the old snow leopard cages so we may have to build a narrow tunnel there.

6. We would have to move our shyer cats inward, and more gregarious cats out toward the new tour path.

7. We would have to devise ways to make sure visitors don’t annoy the cats, climb the fences, throw things or let their kids run wild.  This can be handled by the fact that we have 100 volunteers doing work in the area and CCTV throughout.  We could allow that the only thing they can carry with them is their camera and car key and make them empty their pockets and lock their stuff in their cars before entering.

8. There is a lot of back tracking if a visitor goes all the way around the Vacation Rotation cage, but we could post signs to that effect.

1. More guests and happier guests as people complain most about not being able to stay longer with cats.

2. More shopping, thus more money for the cats and to end the abuses that cause cats to be in need.

3. More opportunity to get guests to take action on our bills to ban the exploitation of exotic cats.

4. Happier and more volunteers because they want to be doing cat stuff and not giving tours.

6. We could still do the Private, Photo, Feeding and Keeper Tours and they would be more of a treat since the regular tour wouldn’t be anything like the personalized tours.

7. Guests would be able to see Tigers, Lions, Leopards, Servals, Bobcats and Caracals, which only leaves out Sand Cats, Bearcats, Jungle Cats, Geoffroy Cats and JoJo the hybrid, but those cats are rarely seen any way.

8. We can still educate just as well by hooking them up with the automated tour if we can find a cheap, disposable version. Anyone with a smart phone can already hear the whole tour from their own phone, so maybe we just have them download it before heading out.  We can insist that no one is allowed to even go into the guest area until they are completely outfitted with an audio version of our message to play.

9. No more administrative costs for reservations on our Day Tours.

10.  Google Places will finally consider our profile complete if we have set hours.

11.  A lot more eyes on the cats, which is better for their care.

2 responses to “How Can Big Cat Rescue Offer Effective Self Guided Tours?”