By Tom Fletcher – BC Local News

VICTORIA – A pair of African lion cubs seized by conservation officers could be the first test of B.C.’s new alien species legislation.

Environment Minister Barry Penner confirmed that the lion cubs were seized as part of an investigation in the Cariboo region in March. He declined to comment on a news report that the cubs were seized from Kim Carlton, whose property near 100 Mile House was the site of a fatal attack by a Siberian tiger in 2007, until Crown prosecutors decide if they will proceed with charges.

The death of 32-year-old Tania Dumstrey-Soos prompted the B.C. government to act, and new provisions of the Wildlife Act came into full effect on April 1. Possession or breeding of restricted species now requires a licence, which for now at least can be obtained at no charge.

“It does underscore the fact that we take these new provisions seriously,” Penner said of the lion cub seizure. “If people have these types of animals, and you can see the full list on our ministry website of the alien species, they need to make sure they are in compliance.”

The list is long, from the Asiatic elephant to the snow leopard to the yellow-blotched pit viper. It includes dozens of mammals, snakes and reptiles, plus three types of poison dart frog and three varieties of cassowary, the only amphibians and birds listed.

Dumstrey-Soos was living at a rural property near Bridge Lake, with a collection of domestic and imported animals advertised as Siberian Magic. A three-year-old Siberian tiger reached under its enclosure and clawed her.

A review of B.C.’s exotic animal laws found that the federal government regulates imports, and some municipal bylaws barred the possession of exotic animals. But there was no restriction on breeding exotic animals once they have been brought into B.C., and no regulation of zoos or exotic animal possession in much of the province.

The licence requirement for breeding animals came into effect a year ago, and regulations on possession of identified species are in effect as of April. 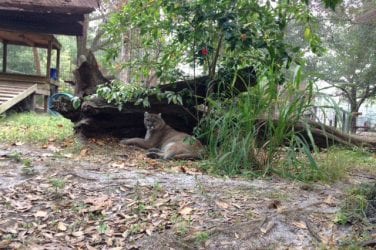 Big Cat Updates Sassy Caracal is looking a little better each day, but at ...

After a decades-long battle, a big-cat aficionado apparently lost hold of his menagerie on ...