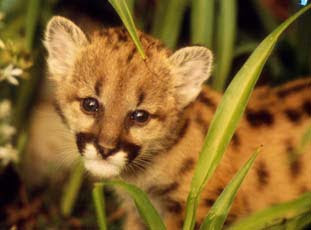 California Department of Fish and Game’s (CDFG) misguided lion policies have resulted in another death of a mountain lion kitten. According to witnesses, the kitten was a 7 to 9 month old female, not apparently afraid of humans, and it was rolling and playing before being confronted by humans. Bystanders threw a couple rocks at it trying to get it to leave but it did not do so. The warden said he had no choice but to follow policies given to him by headquarters and kill the kitten. He was not happy about it, but he said he had no choice but to follow those orders because it was after hours and he could not get anyone to say anything different. Currently CDFG has a standing policy to kill any lion – regardless of age – if it comes into contact with humans and does not leave the area of its own volition…….Mountain Lion Foundation