Chinese Tiger Sold as Pet After Mother Killed in 1936 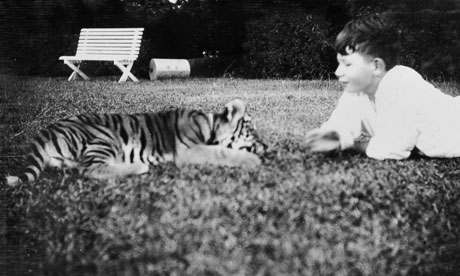 Johnny Wilding, aged 13, with Tiggy the tiger in the family garden in China, 1936

Johnny Wilding was at school when the tiger came to tea. Three soldiers knocked on the door and a message was passed by the “No 1 boy”, a footman, to Wilding’s mother, Marie Elisabeth. A village on the Chinese mainland had been terrorised by a tiger, and a squad of soldiers was dispatched to kill it. They shot a tigress and ate two of its cubs in a celebratory banquet. One cub, still blind and just 10 days old, survived and the soldiers remembered that the “crazy” foreign wife of a customs official took in all sorts of creatures as pets.

So they set off to Santuao, a semi-tropical island where Johnny’s father, the commissioner for the Chinese maritime customs service, lived. If the soldiers hoped to obtain big money for the tiger cub, they succeeded: “Boss-lady”, Marie Elisabeth, purchased Tiggy the tiger for the princely sum of $36 .

If the past is a foreign country, the story of Tiggy the tiger seems so exotic as to hail from another planet. Over just one lifetime, everything has changed. Tiggy and Johnny both eventually moved to Britain and Johnny, who is now 87, lives in a red-brick house in Rotherham with his wife, Thelma. They do not have any pets.

Tragically, the South China tiger is today thought to be extinct in the wild. But the story of Tiggy and a lost world of white hats, hierarchy and very weird pets, lives on, vividly, in Johnny’s photograph albums and in his memories. His father, Humphery (his name was misspelt by the registrar), mysteriously – and possibly scandalously – set out for China aged just 19. He found work at the Chinese customs, rising through the ranks and eventually marrying the Chinese-Danish daughter of his boss. Following his two sisters, Johnny was born in 1923. His earliest memories are not of his mother and father but of his amah, his nurse, and his small white terrier, Pahpee (his attempt to say “puppy”). As an important customs’ official, his father was given a lavishly staffed house. Almost 100 people served the family: butlers, waiters, footmen, coolies (cleaners), laundrymen, engineers, rickshaw pullers, boatmen, night watchmen, water carriers and “untouchables” who dealt with the family’s excrement.

“My mother was the remote authority behind it all. She never did anything herself of course; it was ‘Do this’ and it was done,” remembers Johnny. His mother was shy and quiet but his parents were also creatures of their time; distant, “like most Victorian and Edwardian parents”, and aloof by the standards of today. Johnny would see them only briefly at breakfast and again at dinner; he cannot remember ever being held or touched by his mother. “There was very little contact between parents and children.”

There was rather more contact between Johnny’s mother and her menagerie. “There was a deer and a porcupine and a pelican and a fox,” says Johnny. “There was a chimpanzee and, before my time, a leopard. They all more or less lived together. They each had their cages but would spend several hours each day mingling with the family and the dogs. It didn’t seem to bother them that they were all different species.”

One of his earliest memories is of Micky the monkey, who sat on the shoulder of his eldest sister, Freddie, with its tail hanging down. “Aged five, I found this irresistible and I pulled the tail. Calamity,” he recalls. The monkey took fright and Johnny was sent off in disgrace. The bigger chimp, also treated as a member of the family, later created trouble when given a “sly kick” by one of the house “boys”, who routinely tormented it. This time the boy was bitten so badly he had to be taken to hospital. The chimp was put down.

It is not the colour of the tropical butterflies and moths that Marie Elisabeth once collected that is lodged in Johnny’s mind but the noise that some made. These spectacular insects were pinned in display cabinets, but his mother did not deploy the traditional “killing bottle”, containing cyanide, in which captured butterflies and moths were swiftly killed. Instead she just pinned up the insects – alive. “I particularly remember the death’s-head hawkmoths. When they are disturbed, they squeak. These poor things would squeak for a couple of days pinned to the board, but it didn’t seem to bother my mother.”

She may have been quiet, but Johnny’s mother was formidable. Their idyllic and privileged existence on a Chinese island came with all the downsides of a tropical paradise: typhoons, rats and snakes. One day, Johnny’s amah rushed into the house to say that a huge snake was eating the pigeons the family kept in a cage outside. A large snake had slithered through a hole in the wire and could not now escape, on account of the large pigeon-shaped bulge in its stomach. Johnny’s mother grabbed the snake and ran her hand up towards its head, ruffling the snake’s belly scales in the wrong direction, a trick that caused it to become motionless, as stiff as a poker. The Chinese staff were impressed, and Johnny’s mother gained a useful reputation as a bit of a sorceress.

Proud of her Danish ancestry, Marie Elisabeth decided to breed Great Danes. At one point, she doted on 11 Great Danes and another eight dogs. Local people looked on in bewilderment, unused to the concept of pets, but those “with an eye for an odd penny” would take interesting animals around to their house to see if Johnny’s mother would buy them.

And so Tiggy arrived and, after some bartering cost rather more than a few pennies – $36 was a month’s salary. Marie Elisabeth shared the cost with the wife of the British consul, although Johnny’s mother assumed all responsibility for bringing the tiger up and, while Johnny was sent to boarding school in a remote part of China, bottle-fed it for several months.

Barely 5lbs and just 19in from nose to tail when he arrived, Tiggy soon grew and was treated like one of the family dogs. He was very playful – a favourite trick was to hide behind a chair or door, then leap out and pounce, rehearsing his killer instincts. This was fun for the family at first, but when he became as big as the dogs, it was frightening. “When he was big, Tiggy would jump out and knock you over and lie on top of you with his jaws open over your throat. It was all play and as gentle as anything, as far as it was possible for him to be gentle,” says Johnny.

Eventually, Johnny’s mother realised that Tiggy was becoming dangerously boisterous. He could not be returned to the wild and Marie Elisabeth did not trust the Shanghai zoo. With the British consul’s wife also applying pressure, the captain of HMS Kent, then posted in south China, was persuaded to give the tiger passage to a responsible zoo when he returned his ship to Chatham dockyard.

Tiggy arrived in England in 1936 to some fanfare, with stories in the Observer and the Sunday Times. “Every evening ‘Tiger Tim’ played on the quarterdeck with the officers,” reported one newspaper. “He was a great favourite with the crew.”

It appears from the pictures of Tiggy on deck, assaulting the petty officer put in charge of his wellbeing, that this big cat was not remotely fazed by a few months floating on the high seas. He was found a new home at London Zoo.

Soon afterwards, the Wildings travelled to Britain and Johnny’s mother rushed to visit Tiggy at the zoo. Even though she was standing in a crowd, Tiggy recognised her straightaway, and leapt around noisily. “He was obviously desperate to get close, so they allowed my mother – I don’t know how they got away with that – to get into his cage and touch him,” remembers Johnny. “They were all over each other. When they parted, I was told that Tiggy kept on roaring for ages afterwards.”

All Johnny had known was China but, aged 13, he was sent to boarding school in Britain. “The biggest shock in England was how quiet the nights were. Out in China all the creatures came out at night, and it was noisier than the day,” he says. When the Japanese invaded China in 1937, expats were forced to leave the country, and his father and mother arrived in Britain on the eve of the second world war. Even though they had to flee on a truck through Vietnam and then on an overcrowded boat from Hong Kong, Marie Elisabeth typically managed to persuade the authorities to allow her last Great Dane to accompany her home.

Johnny’s father died soon afterwards but as Johnny studied to be a doctor and later became a pathologist, his mother, who had never previously lived in Britain, kept a rather more modest home in Cheltenham for many years with nothing more exotic than dogs to accompany her.

Johnny and one of his sisters were forced to renounce their Chinese nationality when war broke out and neither they nor their mother ever returned to China. Nor did they ever see Tiggy again. When she walked out of the zoo, all Marie Elisabeth could hear were Tiggy’s heartwrenching roars. “It was too upsetting,” says Johnny. She was so devastated by their parting that she was never able to visit Tiggy again.

Thankfully the UK outlawed such abuse in the 1970s while the U.S. lags behind, daily adding to the suffering of thousands of big cats who are bred as photo props and then discarded or warehoused for miserable lives of deprivation and captivity.