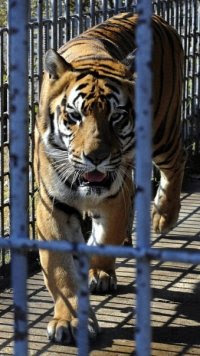 A request for renewal has not yet been received. But if it and supporting documents are received, the commission makes an on-site visit. The applicant then is informed by letter of the commission’s decision, which, if approved, is good for one year,

The Wild Animal Sanctuary and other wildlife advocates have been petitioning Louisiana officials to remove the animal and publicized the board would meet in regular session Dec. 2. But permit decisions are not made at board meetings, Boehringer said.

Louisiana bans private ownership of big cats, except for four owners grandfathered in on Aug. 15, 2006. But after the law was passed, only Sandlin remained as a big cat owner, he said.

The business’ website, http://www.tigertruckstop.com/ has posted statements disagreeing with charges made by wildlife protection groups that Tony’s living conditions are hazardous to him and a safety risk to the public.