Die of the Tiger

Die of the Tiger

EXPOSED, under threat and no longer on the prowl.

It is a sad twist that with the Chinese year of the Tiger beginning next month, the fate of the world’s most famous golfer is better known than the plight of his namesake.

For 2010 may be the year that one of nature’s most majestic creatures finally fades from view.

As growing Asian populations overlap with their hunting grounds, the survival of the tiger is now in doubt.

This month the World Wide Fund For Nature (WWF) will launch a last-ditch attempt aimed at saving the species, whose numbers are down to just 3,500 animals worldwide.

The charity recently caused shockwaves when it reduced its estimate of the tiger population from 4,000.

Diane Walkington, UK head of the charity’s species programme, says: “We absolutely have to take action to save the tiger. The change in percentage terms has been dramatic.”

Three of the nine subspecies of tiger are already extinct – with just six remaining. Not surprisingly, counting tigers is an inexact science.

The animals hunt alone at night and the poachers who kill them leave little sign of their remains.

But in several countries infra-red triggered camera traps are now being used which can sense the creatures’ body heat.

The WWF yesterday released the first known video of a rare female tiger in the wild with her cubs. It will give researchers a unique insight into the elusive creature’s behaviour on the Indonesian island of Sumatra.

Tiger numbers are dwindling thanks to poachers and villagers who hunt the animals for slaughtering their livestock.

In an effort to stop the killings, the Indian government recently pledged £130million to set up a Tiger Protection Force to combat poachers and relocate up to 200,000 villagers.

Eight new tiger reserves in India are also being created. But even with increased efforts to set up international sanctuaries, the paths of man and tiger seldom cross easily.

Just a few weeks ago a Chinese man was sentenced to 12 years in jail for killing and eating the last wild Indochinese tiger in the country.

Villagers also have to protect themselves, as well as their livestock, from tiger attacks. The big cats kill nearly a dozen people a year in an area known as the Sundarbans on the border of India and Bangladesh.

“Tiger widows” – women whose husbands have been killed by Royal Bengals – are not uncommon and attacks are increasing. One of the creatures was even found hiding in a villager’s kitchen.

Diane Walkington says: “We are at a very critical time for tigers. We are hoping governments will announce concrete results, show more political will, step up legislation and put in place cross-border treaties and commitments to exchange information, to invest in more anti-poaching staff and intelligence work.”

It is estimated that one Bengal tiger dies every day. Just over a century ago there were more than 40,000 alive in India – now there are just 1,800.

India recently appealed to neighbouring China to help stop the trade in tiger products, which are in demand for use in alternative medicine, but the request was rebuffed by the Chinese.

Even a mounted head, the symbol of the Victorian hunter, can sell for £800.

In an effort to track down poachers researchers at Cardiff University recently announced a programme to extract DNA from plundered tiger products in an effort to pinpoint where the huntsmen are operating.

But many schemes are racing against the clock – and the future of the beautiful beasts may rely on returning caged tigers to their natural environment.

A plan similar to this has been adopted to help the South China tiger, which is believed to have already disappeared in the wild. A team is rearing zoo-bred tigers in South Africa and hope to release them in China.

The Save China’s Tigers group was founded by Li Quan, a London-based fashion executive, and her husband Stuart Bray, an investment banker.

They have an agreement with the Chinese government to reintroduce the tigers to two of the country’s reserves.

And two years ago the birth of two cubs instilled hope the plan may work.

But while expectations are high for the scheme, it is a small venture and the crisis facing tigers is worldwide.

It is clear that if one of the world’s greatest beasts is to survive then it is man who needs to change his stripes.

ONE recent incident has highlighted just how close people live to tigers in India.

The pictures below show a rare Bengal tigress leaping to freedom last year after being rescued from a rampaging mob.

Crowds chased the pregnant animal for 14 hours after it left the forest and was spotted near a village.

A thousand locals joined the hunt in which five people were injured, pelting it with stones as they pursued it across fields, through huts and barns and up a banyan tree.

The tiger was finally rescued by forest rangers after they caught it in a fishing net.

The animal was then tranquillised and transported by boat along the river Sundarikati before being released.

It was one of just 70 tigers that live in the Sundarbans mangrove forest along India and Bangladesh’s border. 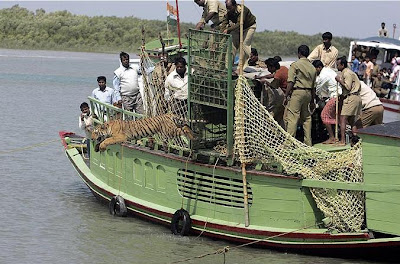 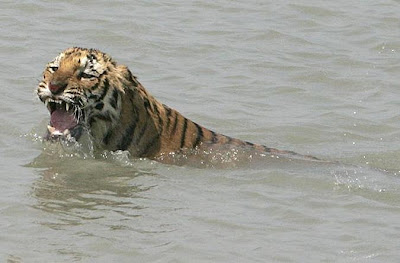 Man killed by tiger that mauled boy in 2004, police believe