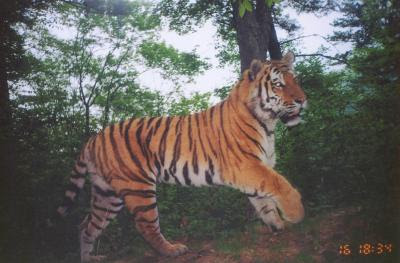 A camera trap image of a Siberian (Amur) tiger in the Russian Far East. A team of health experts from the Bronx Zoo-based Wildlife Conservation Society and several Russian organizations have confirmed the presence of distemper in wild tiger populations, a finding that will enable conservationists to formulate measures to mitigate this recent threat. Credit: Image courtesy of WCS Russia

A’ team of Russian veterinary colleagues and health experts from the Wildlife Conservation Society’s Bronx Zoo are collaborating to understand how distemper — a virus afflicting domestic dogs and many wildlife species — may be a growing threat to Siberian (Amur) tigers.

The team presented its results at the first-ever Russian symposium on wildlife diseases held this week in the Russian Far East city of Ussurisk. The symposium underscores the growing recognition of the importance of the health sciences to successful wildlife conservation efforts.

Working at WCS’s Wildlife Health Center at the Bronx Zoo, Russian health experts and WCS pathologists used histology along with PCR and DNA sequencing to confirm and characterize the infection in two wild Siberian tigers from the Russian Far East. This diagnosis provides long-awaited genetic confirmation of the fact that distemper is impacting wild tigers, which WCS and Russian colleagues first documented in 2003.

The collaboration will enable conservationists to formulate health measures to counter this latest threat to the world’s largest cat.

Last year a tigress “Galia” — studied by WCS researchers for eight years in Sikhote-Alin Biosphere Reserve in the Russian Far East — walked into the village of Terney. Galia displayed abnormal neurologic signs, seemingly unfazed by the new surrounding, appeared gaunt, and was searching for dogs as an easy meal. The tiger was shot by local police after several capture attempts failed. In November 2003, a similar event occurred when an otherwise healthy looking wild tigress walked into the village of Pokrovka in Khabarovski Krai. WCS staff working in the area immobilized the animal and worked with local Russian veterinarian Evgeny Slabe in treating the tiger, which later died in captivity. Samples for the diagnosis of distemper were collected only from these two animals.

Several other examples of tigers entering villages or stalling traffic on major roadways — behavior possibly indicative of distemper — have been reported in recent years.

“This exchange provides a foundation for elucidating potential disease threats to tigers in the Russian Far East,” said Irina Korotkova of the Primorskaya Agricultural Academy. “Understanding the role of distemper in our wild Amur tiger population is vitally important.”

Distemper is found worldwide in domestic dogs and has caused infection and death in wild species such as lynx and bobcats in Canada, Baikal seals in Russia, lions in the Serengeti ecosystem in Africa, and raccoons and the endangered black footed ferret in the United States.

“With all the threats facing Siberian tigers from poaching and habitat loss, relatively little research has been done on diseases that may afflict tigers,” said Dale Miquelle, WCS Director of Russia Programs. “There are no records of tigers entering villages and behaving so abnormally before 2000, so this appears to be a new development and new threat. Understanding whether disease is a major source of mortality for Siberian tigers is crucial for future conservation efforts.”

Anatoly Astafiev, Director of Sikhote-Alin Reserve, said, “We have seen a fall in tiger numbers within our reserve, so it is very important to know that at least one of the causes is a recognizable disease, something we may be able to address and potentially prevent.”

Canine distemper is controlled in domestic dogs through vaccination. In Africa, massive vaccination campaigns of dogs in villages surrounding the Serengeti appear to have been effective in reducing the disease’s impact on lions.

Dr. Denise McAloose, WCS’s Chief Pathologist and leader of the investigation, said, “This is a great example of what international collaboration can achieve. Without our Russian associates there on the spot, knowing what samples to collect and how to preserve these specimens, samples would never have made it to our lab, and the cause of death would remain unknown. It’s great that we’re all here together to work on this issue as a team.”

WCS is working with staff from the Primorskaya Agriculture Academy and other partners to establish a wildlife lab in Ussurisk to facilitate local diagnostic testing, although it will take several years until the lab is adequately funded and fully functional.

McAloose added: “Until then, there’s still much to do including identifying the source of the disease.”

It is still uncertain how tigers may have contracted the disease and whether it originated in another wild animal species or domestic dogs, both of which can act as reservoirs for the infection.

Latest reports suggest that fewer than 3,500 tigers remain in the wild; 1,000 are breeding females.