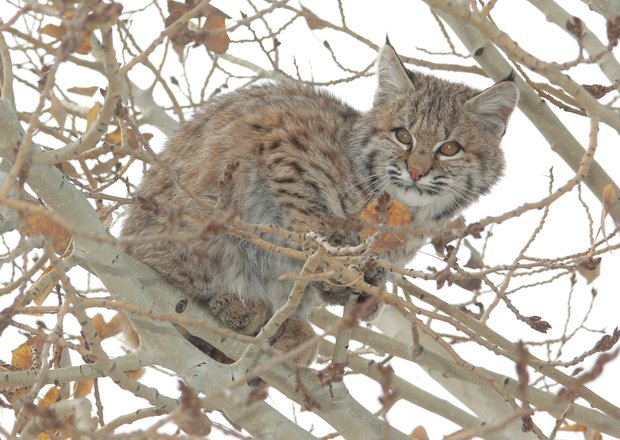 A bobcat perches in a tree near Russell’s Auto Salon just after noon Wednesday. Later, a young bobcat, presumably the same one, was observed trying to break into a nearby chicken coop, prompting a Colorado Division of Wildlife officer to catch it and release it unharmed into the wild.

Steamboat Springs — A young bobcat that crossed U.S. Highway 40 at midday Wednesday in search of a chicken dinner was caught and released back into the wild by a Colorado Division of Wildlife officer.

The bobcat attracted curious onlookers when it first was spied perched in an aspen tree next to Russell’s Auto Salon just after noon. About an hour later, it was observed attempting to gain access to a chicken coop in Dream Island Mobile Home Park.

“It got cornered under the porch of a mobile home,” DOW officer Steve Baumgartner said. “I crawled under there and grabbed it with a noose pole. His health was just fine.”

Bobcats, which avoid forests and wetlands in favor of foothills, mesas and canyons, are seldom seen in Steamboat, but that doesn’t mean there aren’t any around.

“They aren’t exclusively nocturnal, but they have very good night vision, and they’re very good at not being seen,” Baum­gartner said. “They’re usually solitary.”

He confirmed that the bobcat was a youngster.

David Armstrong, of the University of Colorado, wrote in a report prepared for the DOW that bobcats typically breed in late winter and spring. After a gestation period of 10 weeks, a typical litter of three kittens is born. They are weaned at eight weeks.

Bobcats depend heavily on rabbits for food, Armstrong added, but will turn to mice and birds when rabbits are scarce.

Several panther attacks on calves have Immokalee ranchers on alert

Several panther attacks on calves have Immokalee ranchers on alert