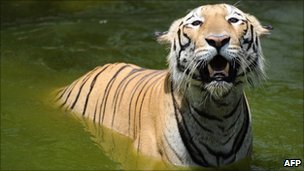 Roar data: Sunderbans tigers were found to weigh nearly half as much as their cousins in the region

Tigers prowling the famous mangrove forests of Bangladesh are nearly half the weight of other wild Bengal tigers in South Asia, a study has found.

The average weight of female tigers in the Sundarbans forests was 76.7kg (170lb), according to the US Fish and Wildlife Service research.

But other wild Bengal tigers in the region tipped the scales at 138.2 kg on average.
Researchers said this could be because Sundarbans tigers ate smaller deer.

The team believes the big cats found in the mangrove forest, which stretches from Bangladesh to India, could be among the world’s smallest tigers.

They belong to one of nine sub-species of Bengal tiger in India, Nepal, Bangladesh and Bhutan.

Smaller dinner Researchers from the University of Minnesota and the Bangladesh Forest Department – who carried out the study for the US Fish and Wildlife Service – weighed three Sundarbans tigers.

Two of the animals were captured and sedated, but the other one had been killed by villagers.

Adam Barlow, one of the authors of the research, said they do not know why the Sundarbans tigers are so small.

They are isolated from the next tiger population by a distance of up to 300km (190 miles).
Tigers are an endangered species. There are only about 3,500 left in the wild worldwide – less than one third of them breeding females.