Fixing a Tiger’s Tooth at the National Zoo

Sumatran tiger named ‘Soy’ goes in for a root canal

How do you perform dental work on a 209 lb. tiger? Very carefully.

A 15-year-old Sumatran tiger at the National Zoo named ‘Soyono’, or ‘Soy’ for short, went in for a root canal Monday.

Vets suspect she somehow hit her right lower canine tooth against something, causing it to fracture. She had an infection which is more dangerous in older cats, like Soy.

“Soy had somehow broken the front part of the tooth off and it went down below the gum, so it was infected… it was like having a splinter stuck down in there” explained Dr. Barron Hall, a local veterinary dentist who performed the surgery and often volunteers his time treating animals at the zoo.

Vets used gas to put Soy under general anesthesia. She remained unconscious during the approximately 2 hour procedure. That’s the only way doctors can work on her.

“These cats, as cute as they are, they’re very dangerous and not only it’s claws, but they have huge canine so we have to be very careful,” said Dr. Carlos Sanchez, a staff veterinarian at the zoo who helped oversee that procedure.

The root canal went puuuur-fectly. Soy is expected to heal quickly and be relieved of that tiger toothache.

One of the trucker websites picked up Tony’s story

Starving zoo tigers eat one of their own

Starving zoo tigers eat one of their own   From correspondents in Beijing   ... 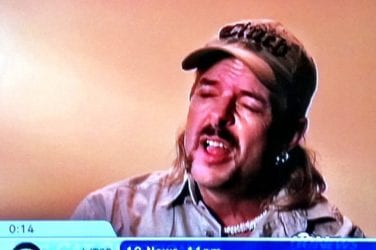 September 25th, 2008 by Eric Owen Jaguars once roamed from Argentina to as far ...