For some awesome photos and field stories, go to WWW.FLORIDAPANTHER.ORG and sign up to receive their Panther Tales Newsletters.

Though the panther historically was found throughout the southeastern United States, today it is restricted to less than 5% of its historic range in 1 breeding population of fewer than 100 animals, located in South Florida. The Florida panther, Florida’s state animal, is one of the most endangered mammals on earth. Vehicle strikes and problems associated with being a single, small, isolated population have continued to keep the panther population at its current low numbers. Potential panther habitat throughout the Southeast continues to be affected by urbanization, residential development, conversion to agriculture and silviculture, mining and mineral exploration, and lack of land use planning that recognizes panther needs. Public opinion is critical to attainment of recovery goals and reintroduction efforts.

HOW CAN YOU HELP? Just drive slowly & cautiously in critical Panther territories, which is most of South Florida. You CAN make a difference, it’s that simple!

The Florida Panther:
An Umbrella Species 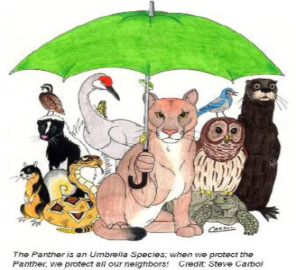 An umbrella species is a species that, through its protection, protects other species that live within its habitat.

The Florida Panther Refuge provides habitat for a total of 126 bird species, 46 species of reptiles and amphibians, 22 species of mammals and a large variety of fish.

Closed areas in the refuge protect habitat for 24 species of endangered, threatened or plant & animal species of special concern status.

Save the Florida Panther from Extinction

• Don’t be an “Island of Knowledge”
Teach others what you have learned and correct myths about the Florida Panther that are repeated all too often. Visit and learn from websites such as www.floridapanther.org, www.fws.gov/floridapanther/ , bigcatrescue.org

• Slow down when you’re driving
Over 10% of the dwindling Florida Panther population was killed in 2009 by vehicle strikes. Watch out for all wildlife. Know what to do if you encounter a panther in the wild; i.e. make yourself appear larger, avoid crouching or bending over, do not run, give the panther an easy way to escape.

Tiger in a Shed, Bobcat in a Box

BCR July 21, 2009
0 comments 0 Shares
Big Cat Rescue is a 501(c)(3) nonprofit organization, FEID 59-3330495. Florida law requires that all charities soliciting donations disclose their registration number and the percentage of your donation that goes to the cause and the amount that goes to the solicitor. We do not utilize professional solicitors, so 0% of your donation goes to a professional solicitor, 100% goes to Big Cat Rescue. Non-program expenses are funded from tour income, so 100% of your donations go to supporting the cats and stopping the abuse.