VARANASI: Around 80 forest personnel, armed with two cages and other equipment, are behind the elusive tiger that has been on a long trail in the eastern region of the state since December 30 last.

Presently, its presence is being felt in areas on the border of Azamgarh and Ghazipur districts. “Though nobody has seen the tiger moving in the area, the pug marks clearly indicate its presence,” forest officer of Kashi Wildlife Division PP Verma told TOI on Saturday.

It may be mentioned here that the tiger was seen for the first and the last time in Jamania area of Ghazipur district on December 30 and 31 last. And, since then, it has been moving from place to place in this region. After crossing the Ghazipur and Chandauli districts, it is now said to be on the borders of Azamgarh.

“We are also behind the beast and regularly following its pug marks,” said Verma, adding that all possible efforts were being made to trap the big cat. “We have engaged a team of 80 forest men in this work,” he said. However, he admitted that the tiger was still out of sight. He was also not sure when the forest department would succeed in trapping the tiger.

“The only good thing is that it is not attacking human beings or domestic animals. It seems that the small creatures, like rabbits, are falling its prey,” he said, adding that there was no report of killing of any big animals.

Meanwhile, rumours were rife that the tiger had entered the Varanasi district and its presence was felt in Chaubeypur and Rohania areas. However, Verma said such rumours might divert the attention of the search team.

Keep it Positive in the Face of Opposition 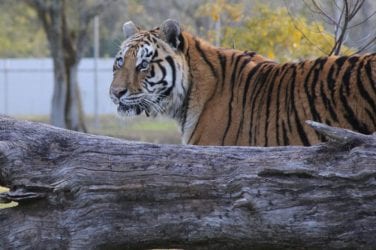 White tiger is part of many Asian traditions

NOTE: White tigers are not an endangered species, but a coloration resulting from double-recessive ...