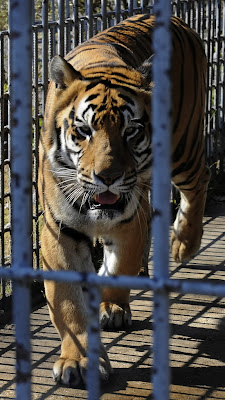 Tony the tiger paces in his cage at Tiger Truck Stop in Grosse Tete in November 2008. Tiger Truck Stop owner Michael Sandlin received a permit from the Louisiana Department of Wildlife and Fisheries on Dec. 14 which will allow him to keep the tiger.

The Tiger Truck Stop in Grosse Tete has received a permit to keep Tony the tiger, according to the Louisiana Department of Wildlife and Fisheries.

The permit was needed after a 2006 legislative action gave regulatory authority over private ownership of potentially dangerous animals, such as primates, wolves, bears and big cats, to the agency, said Maria Davidson, the department’s large carnivore program manager.

“These are not animals that need to be in the private sector,” Davidson said.

The legislation prohibited private ownership of the animals, but allowed people who already owned the animals before 2006 to be “grandfathered” as long as they went through a permit process to keep their current animals, Davidson said.

There were three people in the state who owned big cats and two of them decided to not keep the animals, Davidson said. The animals were taken to other facilities, she said.

However, Iberville Parish officials told Wildlife and Fisheries officials during that process that there was a parish ordinance prohibiting large cat ownership, Davidson said.

Because one of the state agency’s requirements for a permit was that it had to meet local regulations, Sandlin’s permit could not be processed, she said.

Then in March, the Iberville Parish Council approved an ordinance that allowed Sandlin’s tiger to stay with conditions, such as carrying liability insurance, training staff on how to deal with any tiger escape and specifying that the tiger’s diet be approved by a licensed veterinarian.

That opened the path for Sandlin to move forward with getting a “Possession of Potentially Dangerous Wild Quadrupeds, Big Exotic Cats and Non-Human Primates” permit from the state on Dec. 14.

Sandlin said he was prepared to take the issue all the way through the court system in order to keep the tiger. But he said it’s not right that once the tiger is gone, he can’t get another one or get the tiger a companion.

The tiger is 9 years old and Sandlin said tigers can live more than 20 years in captivity.

“Once Tony’s gone, it’s all over with,” Sandlin said. “After 22 years of exhibiting tigers and owning tigers, there’s certainly an emotional attachment.”

According to an inspection letter from Wildlife and Fisheries in September, Sandlin was required to do a number of things before a permit would be granted.

Those steps included raising the perimeter fence from 7 feet to 8 feet, changing the insurance policy, updating an escape plan and installing a safety sign that says “Danger, Wild Animal on Premises.”

The permit has been controversial with animal rights and welfare activists and others who object to the tiger being kept at a truck stop joining the debate.

Davidson said her department received many e-mails from around the world asking the department not to grant the permit.

“I am very sorry to hear that the tiger will continue to live in that miserable situation,” Carole Baskin, CEO of Big Cat Rescue Sanctuary in Tampa, Fla., wrote in an e-mailed response to questions Monday.

However, the facility meets the department requirements, Davidson said.

Despite allegations of unsanitary conditions and of the tiger being unhealthy, Davidson said that doesn’t seem to be the case.

“I stopped by there periodically just to see,” Davidson said.

The tiger is being fed a standard zoo diet, is in decent health and has an enclosure with air conditioning in the summer and heat in the winter, she said.

“I know if we felt those conditions were not humane or not up to standard, then we wouldn’t have issued a permit,” Davidson said.