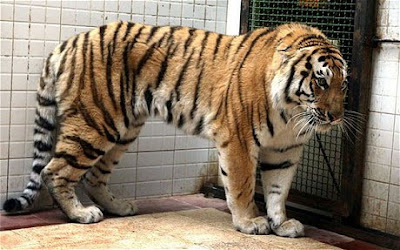 One of two Siberian tigers received by Tehran’s Eram Zoo as part of an echange program with Russia. One has since died, the other is in quarantine Photo: AFP/GETTY

TEHRAN, Iran — A Siberian tiger sent to the Tehran zoo as part of an exchange program with Russia has died after being fed contaminated meat, a senior Iranian official said.

It was not immediately clear what would happen to the leopards.

The news came as the zoo put down 14 lions diagnosed with glanders, an infectious bacterial disease that could affect visitors.

Mohammadizadeh said the tiger ate bad meat but its death could also be related to the glanders.