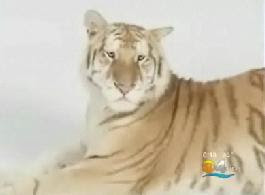 WATSON ISLAND (CBS4)
Jungle Island will temporarily re-open its Tiger/ Liger exhibit this weekend with the approval of the Florida Fish & Wildlife Commission.

Mahesh, the 700-pound tiger named who escaped last weekend will not be in the enclosure. Instead two 9-month old Liger cubs named Malinka and Leloo will be in the tiger exhibit starting Saturday morning and they will be accompanied throughout the day by one of their trainers.

“We understand the sensitivity in re-opening the exhibit so soon after Saturday’s incident and wanted to make sure we addressed any concerns before moving forward with any plans,” says Dr. Jason Chatfield, General Curator for Jungle Island. “Hercules, the Liger has always been an integral part of the Jungle Island experience and we didn’t want our guests who love to see him feel as though they were missing a part of the park.”

Last Saturday’s incident started when a white-handed Gibbon named Watson got loose, climbed up on the tiger enclosure and taunted the tiger.

“The monkey starts mocking the tiger and causing this tiger to get completely irate and wanting to chase this monkey, and it did,” said George Pino, of the Florida Fish and Wildlife Conservation Commission.

Pino said it’s possible that a monkey trainer did not properly close the monkey cage, allowing Watson to make a run for it. But what seems to be puzzling everyone is how Mahesh made it over a 12 foot high fence with a two foot overhang.

“He did have a running start, I know that, and that’s probably the only way he could get enough momentum,” said Dr. Jason Chatfield, Jungle Island’s curator and veterinarian.

Once out, they said Mahesh followed Watson around the park as Jungle Island staffers scrambled to get hundreds of park goers into the safety of nearby buildings. No one was injured by the prowling tiger. But four people hurt during the chaos after Mahesh’s escape were treated for minor injuries. A fifth person was transported to a Miami hospital after suffering a panic attack, said Miami Fire Rescue Lt. Ignatius Carroll.

Chatfield said they were able to corral the tiger back into its night cage without even the use of a tranquilizer.

Florida Fish and Wildlife authorities said they are considering increasing the height requirement for tiger cages. Currently it is 12 feet. But Mahesh’s cage at Jungle Island already surpasses that with an extra two foot overhang. Even so, Florida Fish and Wildlife officials are ordering Jungle Island to make the fence at least 14 feet high with a four foot overhang.