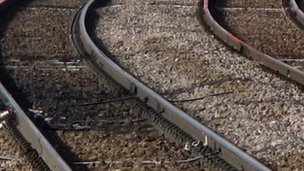 Passengers were not allowed to leave a train at a West Yorkshire village after reports a lion and a cub had “jumped on the tracks”.

West Yorkshire Police said they had received two separate reports of a lion and or lion cub in the area of Shepley, close to Huddersfield.

The 16:50 GMT service from Retford to Huddersfield stopped at Shepley where passengers got on but not off.

A police helicopter was scrambled to search the area but found nothing.

A West Yorkshire Police spokeswoman said: “We had two unconfirmed reports of a lion and or lion cub in the Huddersfield area at 15:30.

“We searched the area with the assistance of a helicopter but have not located anything as yet.

Train operator Northern Rail said passengers were allowed on to the train when it called at Shepley at 16:52 GMT, but those on the train were not allowed off.

A spokeswoman said the company took the action after being advised by Network Rail that a lion and a cub had been spotted on train tracks in the area.

A spokesman for the Association of Train Operating Companies said: “Someone called West Yorkshire Police to say there is a lion that’s just jumped on to the train tracks.”

The Northern Rail spokeswoman said police were treating the incident as a hoax – but West Yorkshire Police said they did not wish to add to their earlier statement.

Northern Rail could not confirm how many people were on the train at time or whether an announcement had been made to passengers. She said no delays were caused.

National Rail had earlier tweeted: “Passengers are currently unable to alight from trains at Shepley due to reports by police of a lion in the area.”

At 17:00 GMT National Rail said services had returned to normal at Shepley.

Police said the search would resume on Monday if there were any more reports of sightings.

In May, a life-sized tiger toy sparked a major police alert in Hampshire.

Officers were deployed and a helicopter was scrambled with specialist thermal imaging cameras over the field, near Hedge End, Southampton, but police quickly realised it was a false alarm.