Courtesy of Brandywine ZooAn African wildcat similar to this one showed up in an Uptown backyard Tuesday.

When Carl Henderson stepped into the backyard of his mother's Uptown home Tuesday at mid morning, he was checking out a neighbor's report of raccoon playing about.

He found something quite different.

Henderson encountered what looked like a small cheetah, 22 pounds and lean, two feet tall in the arch of its back, a long tail, with black and brown spots. An intimidating, lovely feline in an unlikely spot.

"The spots and design on it, the natural nature thing," the 58-year-old New Orleanian said later in the day, still flabbergasted at the mysterious find. "An artist couldn't do that. It was a sight for the eyes."

What he found resting in the shade was a female serval, a small African wildcat, the possession of which is illegal for private citizens in Orleans Parish, Audubon Nature Institute officials said.

Henderson's first instinct was to call the cops, nervous that the wildcat might harm children in the vicinity. But before the law arrived, he somewhat boldly tried to befriend the cat.

He took it water, then slices of American cheese, then pieces of turkey wing.

The cat lapped up the offerings, but bared her teeth and hissed when he drew near.

"I guess I got a little bit too close to his perimeter, and I kindly gave him his respect and backed off," Henderson said. He guessed that the cat's relatively calm demeanor meant it was someone's pet: "If it had been aggressive, it would have had my butt."

The official response to Henderson's 911 call was robust. A small crowd of police officers pulled up at his home in the 700 block of Jena Street, initially leery, he said, of stepping into the yard. An agent from the Louisiana Department of Wildlife and Fisheries came too, as did staffers from the Audubon Institute, which runs the zoo.

Henderson was shooed inside the house. Audubon's veterinarian staff tranquilized the cat with a dart gun, then captured it in a net, spokeswoman Sarah Burnette said. Late in the day, the animal was resting in the zoo's hospital as police tried to determine where it came from and whether it has an owner, legal or otherwise.

"You wouldn't just find a serval hanging around Uptown normally," Burnette said, adding that the cat is likely someone's exotic pet. But such a creature is nothing to play with, said Maria Davidson, large carnivore programs manager for the state wildlife service.

"It's a wildcat," she said. "It's not as big as a lion or a tiger, but it could certainly do damage to a person."

Servals typically feed on small animals such as frogs, birds and rabbits, although they occasionally have been seen taking larger game, such as small antelopes.

Audubon Institute officials have agreed to provide the serval a home, probably at the institute's Species Survival Center in Lower Coast Algiers, if no other option is available.

Henderson relished his brush with the wild kingdom just off Magazine Street, though he was perturbed that no one from officialdom got back to him about the cat's fate.

"They told me to go back inside because the cat, you know, might have other options," he said. "They didn't say hello, they didn't say goodbye."

We are proud to have some of the happiest cats around. And right now ... 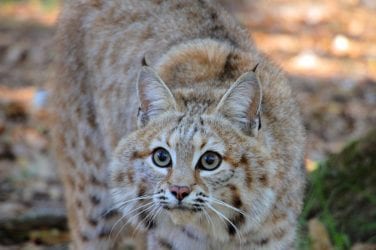