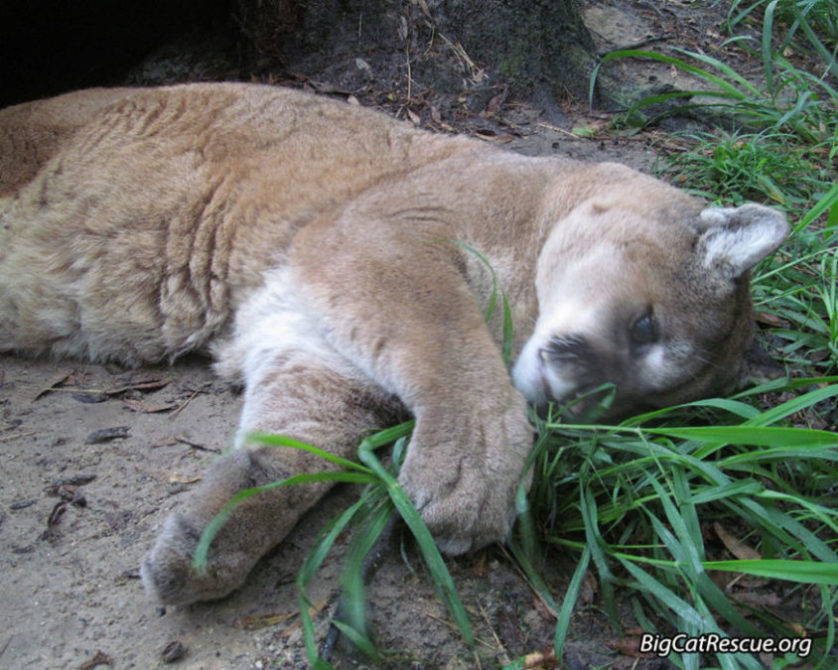 Great weather again today!! It started out cool but warmed up.

We were quite busy in the morning with cleaning, feeding and tours. Thanks to everyone that came in to help today!!

Thanks to Vanessa for weedeating both Tiger Row and Tiger Island!! What a Rock Star!!

Thanks to Sue R. for staying and getting all the PM snacks done.

We had a surprise visit from Barbie Z. long tern green shirt who has moved to Arizona, she came in to help for the day!!

Volunteers came in to do afternoon tours so the interns (Emma, Abbey and Fred) and I tackled raking outback, we made it about half way.

It was a full day. Great Team Work!!!

That is it for me!!
Kathryn

Keepers and Interns have been working on Joseph’s suite of cages getting them ready for Hoover when he goes home from vacation this next Thursday.  You can watch Hoover on vacation at Explore.org/bigcatrescue

REMINDER:  All funds generated by YOUR Facebook Fundraisers for Big Cat Rescue during April 2018 will be donated to ADI’s efforts to rescue the circus cats in Guatemala.  Learn more at BigCatRescue.org/circusban

Ohio’s bobcats don’t deserve to die in inhumane steel-jaw leghold traps. Yet only four years after being removed from the state’s endangered and threatened species list, the Ohio Department of Natural Resources (ODNR) is rushing to open up a bobcat trapping season later this fall.

Last year the state gave Ohio University $245,000 for a multi-year bobcat population study. In addition to figuring out the population size, researchers will be able to predict the species’ growth rate and determine if a hunting or trapping season is even viable. But ODNR’s Wildlife Council, bowing to pressure from trappers who want to cash-in on pelts, is prematurely calling for an open season!

Trapping is an archaic and cruel method of catching furbearing animals. This proposal is not backed by science or in the interest of public safety. It is solely about profit.

Visit the ODNR website and voice your opposition to this proposal before March 31st. Scroll to the bottom of the page and submit a comment for rule 1501:31-15-17 Seasons for game birds, game quadrupeds and furbearing animals.

After taking action, visit the Save Ohio’s Bobcats website for up-to-date info about the proposal, upcoming meetings, and other ways to help.

Thank you for speaking out for bobcats! Learn more about bobcat trapping for the use of fur in this Big Cat Rescue video.

Want to Do More? Attend an upcoming Wildlife Council Meeting or the Public Hearing! All meetings held at:

Be a voice for bobcats! *Register to speak at a Wildlife Council Meeting at least 2 days in advance by calling 614-265-6304.

If you cannot attend, please take action at SaveOhiosBobcats.com

Watch this video to see what YOU Can Do! 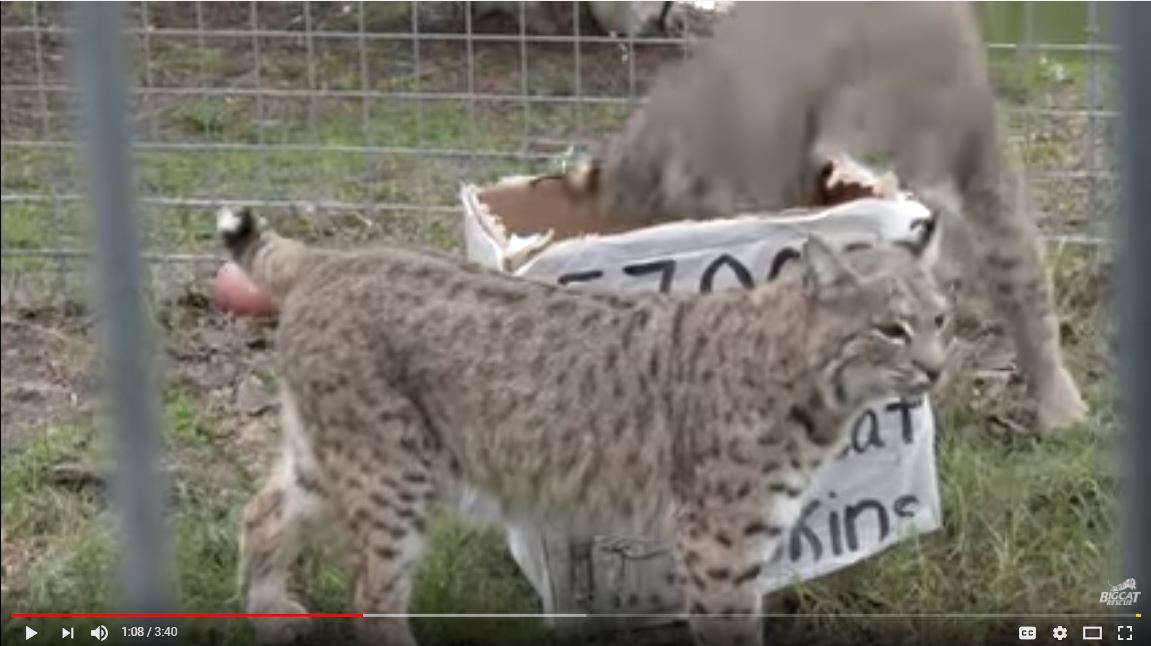 You Can Help by Sharing this video:  If you would like to share this link with your friends and family, here is the direct YouTube link:  https://www.youtube.com/watch?v=LN4I1eZlHMg  Just copy and past this link to your own walls & pages.

Big Cat Devin takes you along on his mid morning feeding route as he gives meds to and feeds Andre and Zeus.  (The cats had already had their main breakfast) Zeus lives next door to tiger siblings, Andre, Arthur, and Amanda.  After the doors were closed to separate the siblings, Kathryn went to feed Arthur and Amanda while Devin went to feed Andre and their neighbor, Zeus.

Well, that is where things turn ornery.  Before coming to eat, Andre wonders off to the end of the cage section where he can pee clear across the walkway between the cages and give Zeus’ lockout and water bowl a stinky shower.  Andre is such a mischievous stinker!

Devin does eventually get Andre to come eat his brunch and tricks Zeus into thinking red meat is chicken.  GREAT JOB, Devin! 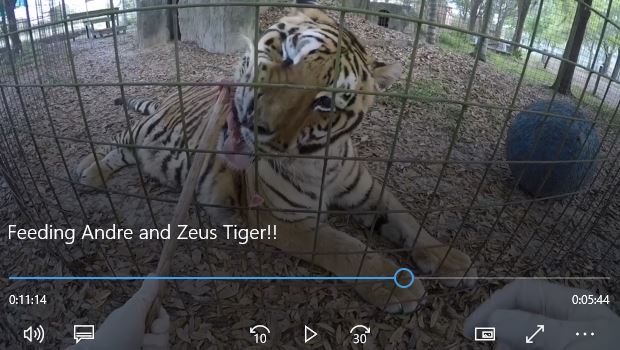 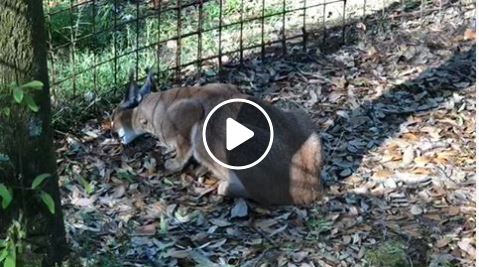 Wildcat Walkabout at Big Cat Rescue in Tampa, FL where we will visit with rescued lions, tigers, leopards, bobcats and more!

CamBu Sun Bath – We are not fans of places that force wild animals of different species to live together to amuse the public, but in Cameron and Zabu’s case, they arrived here as adults who had been raised together since cubs and were really bonded. We fixed them because it’s just wrong to breed wild cats in captivity. No captive born big cat can ever go free and they are just too magnificent for life in prison.

We are not fans of places that force wild animals of different species to live together to amuse the public, but in Cameron and Zabu's case, they arrived here as adults who had been raised together since cubs and were really bonded. We fixed them because it's just wrong to breed wild cats in captivity. No captive born big cat can ever go free and they are just too magnificent for life in prison.

Keeper MaryLou Geis sent in another photo series for you.  This time the star is Reise Cougar who is enjoying the nice cool grass to roll in, lay in, and eat.

Your Shares Make A Difference

You will notice at the top of this page, above the first large photo, there are buttons for Facebook, Twitter, & Printerest.  Please use those to share this page to your social media pages to help us reach more people.

Some of the Oldest Sand Cats   Today the 2012 Sandcat Studbook arrived and Big ... 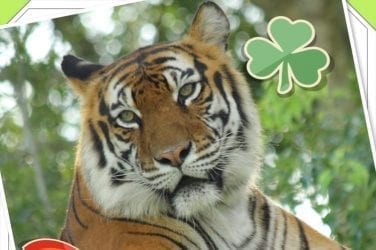