The day I met a Mountain lion 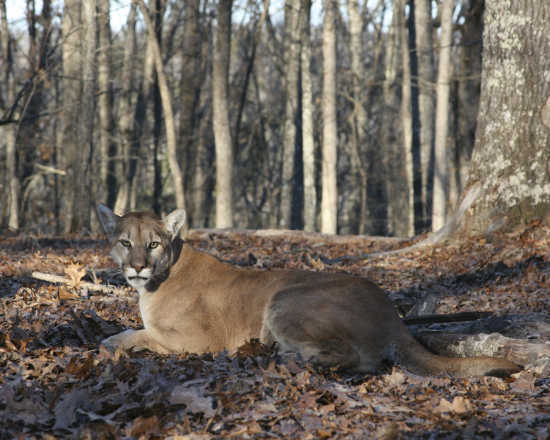 The Mountain lion waits to recover completely from sedation after it was examined by Wildlife Biologist Jeff Beringer at Current River Conservation Area. (MDC photo by Candice Davis)

An element of surprise can make an exciting day even more meaningful. Had I known Thursday morning what was in store for me that day, I would have hopped out of bed with a bit more pep. But, expecting a casual day at the office, I began the day with the usual grumbles.I put on my office shoes instead of my rough and tumble boots, grabbed my coffee to go and took up my post at the office, positioned for a day of paperwork. Thankfully I’d completed at least one report by the time the email came through.

Protection Regional Supervisor, Ken West, sent an “FYI” that a live Mountain lion was caught in a live trap near Centerville, in Reynolds County. I read it twice to make sure I hadn’t misread the information: A trapper, Wayne Henson, said the cat entered a large, cage-type live trap that he set on Mark Twain National Forest land to catch bobcats, coyotes, raccoons and other mammals.

Although Mountain lions, also known as cougars or pumas, were once native to Missouri, there has not been a documented population in our state since 1927. According to the Missouri Dept. of Conservation (MDC), naturally occurring populations exist only in western states, with isolated populations occurring in the Black Hills of South Dakota, northwest Nebraska, western Texas and the southern tip of Florida. Although there is no evidence to indicate a breeding population, individual mountain lions have been found recently in Nebraska, Iowa, Oklahoma, Kansas, Arkansas, Illinois and Missouri. Based on this knowledge, the chance to see a live Mountain lion in the wild, in Missouri, was a very rare opportunity.

West gave me the details and I grabbed my gear. Within minutes I was headed west on highway 72 toward Centerville in Reynolds County.

Two hours later, I spotted the small crowd in downtown Centerville, surrounding the pick-up truck which displayed the caged Mountain lion. Conservation Agent Eric Long stood amongst the crowd, answering questions. I parked the vehicle and approached the back of the truck to get my first glimpse of the lion.

He was positioned as flat against the back of the trap as possible. I wondered if this wild cat was intimidated by the busy crowd that surrounded it. The excited level of conversation was a lot for me to take in, but what was it like for an animal that never interacted with humans? Although he appeared stoic, his eyes squinted with each laugh and shrill of delight that echoed from his admirers.

As a man approached the truck, a low rumble of a growl grew from the otherwise stoic puma. Without any visible change, the growl grew louder as the man approached, until the cat finally shot up on his front paws and bared his teeth at the man. His ears were flat back against his head.

When no one was near the trap, the cat laid waiting for his fate. He flicked his tail, but otherwise just sat and waited.

Wildlife biologist and lead of the MDC’s Mountain Lion Response Team, Jeff Beringer, had hit the road just before I did, but he was coming from Columbia. When he arrived on the scene, he wanted to act quickly to avoid any additional stress to the lion.

When held in captivity, wild animals can become stressed to the point of death. So it was imperative for the sake of the Mountain lion that Beringer act quickly. Almost immediately after Beringer arrived he and Long agreed on a location where Beringer could examine the cat without disturbance. So we set out for Current River Conservation Area.

Once on the area, Beringer quickly prepared a blend of telazol and xylazine to sedate the large feline. After the injection, it took about 10 minutes for the cat to settle into a deep sleep. Then Beringer was able to climb into the trap and gently pull the cat free. He and the other biologists placed it on a tarp and began their exam.

They measured from the cat’s snout to the tip of its tail. They measured his paws and shoulder height. They examined his teeth, took a tissue sample from an ear and pulled out a hair sample to send to a lab for DNA records. The DNA will tell Beringer the lineage of the cat, which will indicate where the cat has traveled from.

The Mountain lion weighed 122 lbs. He appeared healthy, although he had a slight cut on his nose and his paw, most likely from trying to escape the trap.

Once the exam was complete, we sat in near silence and watched the big cat sleep. I placed my video camera near his head, where I could record the sound of his deep breaths. As stressed as he was in the trap, I loved seeing him sleep so soundly — even if it was a drug induced sleep.

About an hour and a half later the sedation began to wear off. He began to wake up and move his head, and then he laid there holding his head up. When animals come out of this type of sedation, it typically wears off the head first, and then the front legs and travels down the body. They must lay there waiting for their back end to catch up with the front. He was calm while he waited.

He looked at us, but he didn’t utter those low rumbling growls or snarls. After a while he tried to stand, but stumbled a bit and lay back down. He repeated this several times, taking a few steps away from us and then lying back down. Eventually he was able to walk away.

Once he was gone, we packed up our gear and left the area. The big cat was free.

All wildlife, including Mountain lions, is protected under the provisions of the Wildlife Code of Missouri. However, the Code provides for the taking of wildlife during prescribed hunting and trapping seasons and under other circumstances, such as when mountain lions are attacking or killing livestock or domestic animals or threatening human safety. Since this cat simply fell for the bait Henson had set out and he was not posing a threat to Henson or his property, MDC policy called for the cat to be released unharmed to the wild.

Someone asked me that evening if I thought we needed to be concerned that the Mountain lion might return to the area. I can see why someone might have that concern. But when I thought back on what that Mountain lion had endured that day I knew the answer. That wild animal, as fierce as he may seem, is also vulnerable. He was caught and his fate was dependent on his captors. It’s more likely he learned his lesson and won’t fall for the bait next time. He wanted nothing more to do with humans.

I had a two hour drive home that evening to spend in thought about that Mountain lion. But he’s occupied my thoughts every day since. The chance to look upon — and touch — a live Mountain lion was a once in lifetime experience. He was beautiful, fierce, and wild, but he was also vulnerable in an awful way. This was not what I expected to learn that day.

Our purpose as a conservation agency became clear to me in a practical way. Starting with Henson’s decision to contact the MDC, we worked together to ensure the safety of everyone involved — including the Mountain lion. Watching the cat transform from fearful captive to free animal transformed me as well. My attitude regarding Mountain lions transformed from fearful, to awestruck respect.