Nero the Bobcat in NC

Red tape forcing man to give up pet bobcat 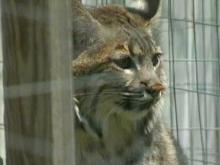 La Grange, N.C. — Nero isn't the everyday house cat. But the 30-pound bobcat calls La Grange his home, where he stays with his owner, Tim Seaman.

"I've had cats all my life, really domestic cats, and I wanted to do something to take it to another level, I guess," Seaman said.

So, in October 2006, he bought Nero from a licensed breeder in Montana, spent thousands of dollars building a regulation cage and applied for state and federal permits to keep and exhibit his cat at his Lenoir County home.

Recently, however, the North Carolina Wildlife Resources Commission told Seaman that Nero has to go to a zoo in Wilmington.

State wildlife officials won't specifically discuss Seaman's case, but they say that, in general, it is against the law for people to keep native wildlife as pets.

"I really think it's a disgrace," Seaman said.

People can apply for a captivity permit to keep animals native to North Carolina, but wildlife officials say those usually only go to educational facilities, such as zoos and habitat sanctuaries.

"It's kind of a discriminatory thing against private individuals, saying 'We're not going to issue any permits,'" Seaman said.

The state cites concerns over disease and safety as reasons to limit ownership of native animals. Seaman argues that Nero had to be cleared of any health problems before he crossed state lines.

He says wildlife officials have never visited his home for an inspection.

"I mean, it's nothing more really than a large house cat or domestic cat, even though he is wild," he said.

Seaman has appealed the wildlife commission's decision that Nero has to go. He says he'll find out early next week if Nero can stay.

North Carolina is one of nine states that do not prohibit residents from owning exotic animals that are "inherently dangerous." Dozens of communities, however, have their own rules and ordinances.

A proposed state law that would ban the ownership of some exotic animals is in a legislative committee. It would prohibit big cats, bears, wolves, monkeys, apes, hyenas and alligators, among others.

Small zoos with federal certification would be exempt, though they would have to hold multimillion-dollar insurance policies.

Write the NC Wildlife Dept. and let them know that exotic cats should not be kept as pets.
http://www.ncwildlife.org/
—
For the cats,

This message contains information from Big Cat Rescue that may be
confidential or privileged. The information contained herein is intended
only for the eyes of the individual or entity named above. You are hereby
notified that any dissemination, distribution, disclosure, and/or copying of
the information contained in this communication is strictly prohibited. The
recipient should check this e-mail and any attachments for the presence of
viruses. Big Cat Rescue accepts no liability for any damage or loss caused
by any virus transmitted by this e-mail.

Putting good stewardship into the constitution

Sent to reporter on Bobcat on Telephone Pole story

Sent to reporter on Bobcat on Telephone Pole story