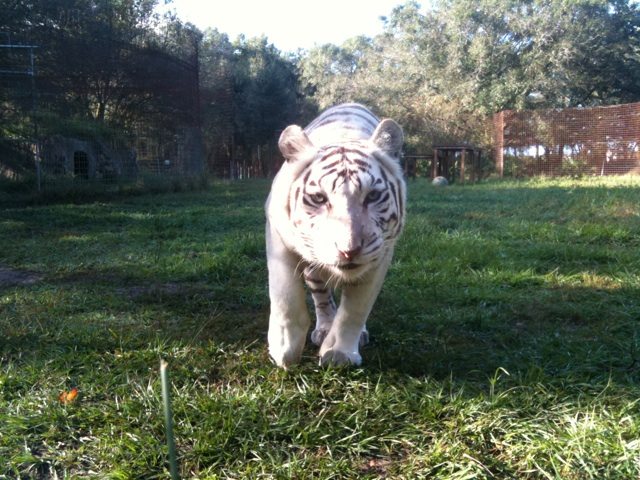 TRENTON, N.J. — Though only a fraction of the world’s tiger population resides in New Jersey, a lawmaker wants to make the state an international model for protecting against illegal sales of tiger bones and other body parts.
State Sen. Ray Lesniak is sponsoring a bill that would require New Jersey’s captive tigers to be counted, registered and tracked to ensure their body parts don’t end up on the black market. The bill faces its first legislative hearing on Thursday.Tigers claws, teeth and whiskers are all marketed illegally, but tiger bones are the most valuable on the black market because they are believed to have medicinal value.
Tom Lovejoy, the chief biodiversity adviser to the president of the World Bank and president of the Heinz Center for Science, Economics, and the Environment, described New Jersey’s proposal as “a pioneering effort” to help tigers worldwide.
He said even if the legislation is largely symbolic because of New Jersey’s small captive tiger population, it would nonetheless serve as a model for other governments and as a deterrent at the Newark ports and in the New York underground market.

Poaching and loss of habitat are the two biggest threats to the world’s remaining wild tigers, estimated at around 3,200. Both wild and captive tigers are killed for their body parts, wildlife experts say.

Kristine Smith, a veterinarian with EcoHealth Alliance in New York who specializes in zoo and wildlife medicine, said she will testify in favor of New Jersey’s proposal. She said the law would help give enforcement officials a needed tool to help capture criminals who deal in wild animal products by being able to identify the dead animal’s origin.

“Having the DNA evidence would give enforcement officials the tools to detect the origin of tigers and tiger parts confiscated, and that would deter owners from entering into the trade,” she said. “That would really deter tigers from New Jersey from being entered into the trade and that, in turn, would set a great example for the rest of the country.”

The bill would create a tiger registry in New Jersey and require environmental regulators to keep track of the population living in zoos and preserves.

The state currently is home to 24 Siberian, white and Bengal tigers living at five zoos and preserves. Six Flags Great Adventure has the most, with 15 tigers.

None are in private hands, said Larry Ragonese, a spokesman for the state Department of Environmental Protection.

Ragonese said the state’s exotic species law requires permits for exotic animals entering the state. The department also receives annual reports from zoos and preserves on the number of animals on premises.

He said there are no known cases of tiger parts trading in the state.

The proposed law would require more rigorous tracking of tigers to ensure that they are not killed for their parts and that no body parts are sold illegally if they die of natural causes.

VERAVAL (JUNAGADH): Timely action by a woman saved the life of her two-and-a-half-year-old son ...

The U.S. Fish and Wildlife Service has put off for a year proposing a ...

Darren Holley is a Big Cat Rescuer who works for ASAP. They loaned their ...