The First New Biography in More than 50 Years 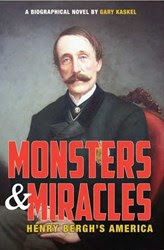 Henry Bergh was responsible for the birth of two great social justice movements in America, and no biography had been written about him in more than fifty years. No doubt, Henry Bergh is the most famous American you’ve never heard of

Gary Kaskel’s new book MONSTERS AND MIRACLES Henry Bergh’s America – The first new biography in more than 50 Years. “He never had any pets, but he started the first animal protection society. He never had any children, but started the first children’s protection society. Henry Bergh was responsible for the birth of two great social justice movements in America, and no biography had been written about him in more than fifty years. No doubt, Henry Bergh is the most famous American you’ve never heard of,” declares Gary Kaskel, author of Monsters and Miracles-Henry Bergh’s America.
“How many people change the way a nation thinks?”Kaskel asks. “Henry Bergh was the founder of two great social justice movements in this country after the Civil War, and yet he remains a relatively obscure historical figure. I’m out to change that.”
Writer and filmmaker Gary Kaskel has penned a biographical novel that explores the mind of a wealthy New Yorker who never had to earn a living, who in mid-life finds his calling to protect animals exploited mercilessly by a variety of perpetrators, which led to very public confrontations with Commodore Vanderbilt and P.T. Barnum. The author gets inside of his subject’s head to examine the motivations for his groundbreaking efforts which later expanded to another defenseless group: children, and in the process weaves a fascinating historical narrative of 19th Century America.
Praise for Monsters and Miracles:
As America recovered from the Civil War, Henry Bergh was a wealthy dilettante-playwright-diplomat, who then turned into a pioneer of social reform on two battle fronts: the abuse of animals and the abuse of children. Blending history and psychology, Gary Kaskelnovelistically brings this complex figure to vivid life and illuminates issues very much with us today. A much needed book.
Monsters and Miracles is the story of a complex and conflicted warrior for children and animals who changed the consciousness of a nation more than a century ago. As an animal advocate, I love the story of Henry Bergh, founder of the first animal protection society in America. It is simply a must-read for anyone interested in the humane movement and true American heroes.

Henry Bergh is widely thought to have started the animal protection movement in America and now, thanks to GaryKaskel’s intelligent and compelling biography, we know how this came to be. Kaskel paints a detailed and personal portrait of the man who taught us to respect animals. This is an important book that will be on the shelf for years to come—and it’s a great read.

Kaskel has woven an urbane and atmospheric tale of New York and Europe in the mid-19th century and an aristocrat’s passionate crusade not only to bring America forward on the subject of animal cruelty and children’s rights but for meaning and purpose in his own life.
AUTHOR’S BIOGRAPHY
Gary Kaskel was born and raised in Manhattan where he studied at the American Academy of Dramatic Arts as a teenager. He has been writing and making films since he was in grade school. His diverse career includes working as a camera salesman, stand-up comedian, journalist, technology consultant, charity executive, actor, screenwriter, director, cameraman and editor.
Since graduating from the CalArts film school, where he studied screen writing and directing under Alexander Mackendrick (“The Man in the White Suit,” “The Ladykillers,” “The Sweet Smell of Success”), Gary has worked in film and television as a writer, producer, director and cameraman for news, entertainment and documentary projects.
From 1980 to 1982 he was associate producer for television legend Milton Berle’s production company. After a move back to New York City, he became a freelance director/cameraman for broadcasters and advertising agencies.
For more than twenty years, Gary Kaskel has had a strong interest in animal protection and other social justice issues. He was president of United Action for Animals in NYC (2003-2007). His intimate knowledge of the spectrum of animal advocacy led him to make “Animal People – the humane movement in America,” a feature documentary in 2006. From 2008 to 2011 he was a producer of the annual Genesis Awards for the Hollywood office of The Humane Society of the United States.
Presently, Gary Kaskel is CEO of Carriage Trade Media, a production company focusing on developing socially-conscious comedy, drama and historical film and television projects. After several years of researching the life of ASPCA-founder Henry Bergh, he wrote an historical novel based on his life entitled “Monsters and Miracles.” He is presently working on an autobiography titled, “I Could Have Been a Pawnbroker.”
To purchase MONSTERS & MIRACLES Henry Bergh’s America visit http://www.GaryKaskel.com
Copyright ©2013 by Gary Kaskel
Edited by Arthur Gordon
ISBN 978-0-7414-9804-5 Paperback
ISBN 978-0-7414-9805-2 eBook
Library of Congress Control Number: 2013914404
Published October 2013
For media interviews, call Gary Kaskel at 424-248-3437