No Result
View All Result
Home FAQs Working with Cats

0
SHARES
112
VIEWS
Share on FacebookShare on TwitterShare via Email

The Plight of Lions in Africa 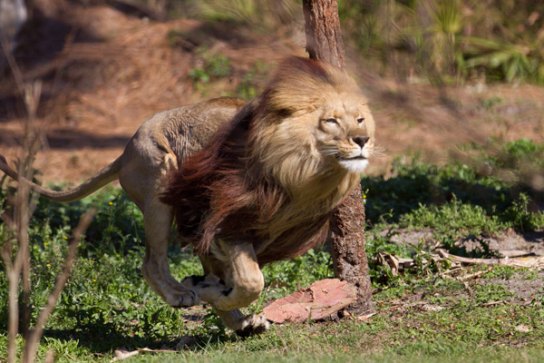 The world’s largest desert, the Sahara already engulfs much of west Africa and its fringe, the Sahel, is too dry, and receives too little rain, to keep the desert at bay. Well over half of some countries where the lion has become extinct – Mali, Mauritania and most of Niger, for example – have already disappeared beneath the Sahara.

The lion is a creature of the savannah and semi-open woodlands, but as burgeoning human settlements and overgrazing pick the land clean of grasses, the land turns to dust. Where the land is yet to unravel, subsistence crops or large-scale plantations of cash crops, such as cotton, crowd out the last of the land’s wild creatures.

Under such conditions, neither lions nor the prey species that make up the lion’s diet can survive for very long. With human populations on the rise in a region where food is scarce, many animals are killed for bush meat, while lions increasingly turn to domestic livestock as an alternative source of food. The inevitable result is that conflict between lions and human beings spirals out of control.

At the big-picture level , the situation is dire. Lions in west Africa now inhabit barely 1 per cent of their historical range. Put another way, lions once roamed across an area almost the size of mainland Australia. They are now restricted to a total territory five times the size of Greater Melbourne.

”Every survey we do is inaccurate because as soon as you complete it, it is already out of date; the declines are so rapid,” says Dereck Joubert, a documentary filmmaker who madeThe Last Lions and is co-founder of National Geographic’s Big Cat Initiative.

”It is a terribly sad state of affairs when you can very accurately count the lions in an area because there are so few of them.”

Dr Luke Hunter, the Australian who is president of Panthera and a co-author of the study of west Africa’s lions, pulls no punches when he says ”lions have undergone a catastrophic collapse in west Africa”.

”The countries that have managed to retain them are struggling with pervasive poverty and very little funding for conservation.”

Henschel points out that many governments in the region have bigger problems than protecting lions and that most of the parks where lions were thought to survive are ”paper parks” with neither management budgets, patrol staff, nor for that matter any lions or other iconic large mammals. These ”paper parks” are systematically being stripped by poachers.

Even in the four populations of west African lions that have somehow survived, those in Senegal are separated by thousands of kilometres from lions in Nigeria. And three of these populations are so small that they may not be viable in the longer term.

At the micro level, the situation is similarly dispiriting. One of the parks where the lions do survive is Niokolo-Koba National Park in Senegal, where just 16 remain.

”What says it all, concerning the rarity of the lion in the park is that not one of my four survey team members, all long-serving national park service staff, had ever seen a lion in their lives,” Henschel says.

West African lions are one thing, but it is the report’s implications for lion populations elsewhere in Africa that has some lion experts worried.

While it is estimated that no more than 30,000 lions remain in Africa, these figures do not accurately reflect the species’ prospects for survival. For a start, no one really knows how many lions there really are left.

”There are several large landscapes in east and southern Africa that are potentially key lion areas, and have never been systematically surveyed,” Henschel says. ”Estimates of lion numbers for those areas go back to informed guesses by managers, made, at times, more than 20 years ago.”

And, in any event, says Hunter, rather than asking how many lions there are it is far more important to ask about the trajectory for the species and about the state of the ecosystems in which they are living.

”And when you do this, you see that many lions live in small and isolated populations that simply aren’t viable. Lions inhabit less than 20 per cent of their historical African range and their trajectory is anything but positive.”

Part of the concern stems from the fact that the west African lion is no ordinary lion: its genes are unlike those of any other lions.

Separated in space and time from the rest of Africa’s lions – by the vast Congo rainforest system and epic escarpments of the Great Rift Valley, by anywhere between 20,000 and 40,000 years of inhabiting different worlds – west African lions have more in common with the last remaining lions of Asia than they do with lions elsewhere in Africa.

What all of this means is that west Africa’s lions have a rather unusual – and potentially invaluable – genetic footprint, one that, with the extinction of north Africa’s Barbary lion in the 1940s, exists nowhere else.

Even so if lions can be saved elsewhere, why does it matter if west Africa’s lions disappear, especially when conservation resources are so limited? ”Recent genetic studies established that west African lions have unique haplotypes, that is, genetic sequences, not found in any other lions,” Henschel says.

”We do not yet know what traits these unique genetic sequences express, but they may hold adaptations to the extremely hot and dry Sahelian climate that west African lions adapted to. This could be crucial for the survival of the entire species under current climate-change scenarios.

Dr Christine Breitenmoser, the co-chair of the International Union for Conservation/Species Survival Commission Cat Specialist Group, the body responsible for assessing the conservation status of the world’s wild cats, agrees that losing the lion in west Africa means the loss of a unique, locally adapted population found nowhere else.

”It makes their conservation even more urgent,” she says.

In other words, as east and southern Africa become drier, the adaptations learnt by west African lions may become crucial to the survival of the entire species.

Beyond genetics, the human pressures that have driven west Africa’s lions to the brink of extinction apply equally to other areas of Africa where lions live.

”All across Africa, lions are in danger because of human encroachment onto lion lands, unsustainable hunting of the animals that make up the lion’s diet and retaliation against lions for killing livestock,” Henschel argues in his study.

”What we see in west Africa today is what happens when nobody actively combats the known threats to lions. The current situation there exemplifies what will happen to lions in eastern and southern Africa if conservation efforts there abate and the above-mentioned threats to lions become prevalent in key lion sites.”