0
SHARES
14
VIEWS
Share on FacebookShare on TwitterShare via Email

Cypress the bobcat was rescued on January 4, 2014 and has been recovering in the West – Boensch Cat Hospital for these past 7 weeks.  She had been resisting eating whole prey items, such as rats and chicks, so we were getting worried that she would never switch off the ground diet we have been giving her to the real prey items that she would have to eat in the wild. We couldn’t let her lose her ability to recognize prey and insisted that she eat what wild bobcats eat, but maybe Cypress knew best because after giving in and eating mice, she got bound up and couldn’t pass the fur and bones.

We took her in to see Dr. Wynn yesterday to do follow up X-rays and help her eliminate the fur and bones that were stuck in her intestinal tract. It was a very sad day for us because it appears that her pelvis is not healing properly and she may never be able to eat rats, mice, birds or anything else with fur, feathers or bones.  That means she will probably never be able to go free. 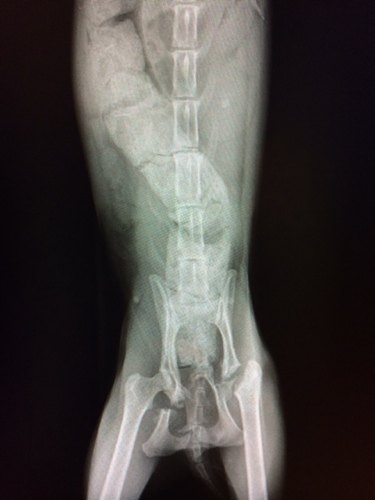 So now we are faced with an awful decision:  Life in a cage or euthanasia. Since it is still early in her recovery, what we decided to do was flush out her bowels (a big shout out to everyone at Ehrlich Road Animal Hospital as this stunk up the whole place) and put her back on a ground diet.  If she can continue to eat and pass the ground diet, as she did for the first 6 weeks, then we will move her outside and try to acclimate her to humans. Right now she hates us, because wild bobcats are supposed to hate people, but if she has to spend her life in a cage, then we need to help her learn to love us.  That means lots of treats on sticks, soft words and patience.  Even this isn’t a guaranteed life of luxury for Cypress though. There are many other considerations, such as; Pain management:  Can she heal in such a way to be pain free? Future blockage:  Even if we only feed her a ground diet, will she be able to catch squirrels or birds that end up in her cage and get blocked up again?  We aren’t going to put her through repeated episodes, so if it happens again, it will only be humane to euthanize her. There are many other factors to consider, and it is this sort of thing that keeps us up at night.  This was about the worst news we could get on Cypress, but thought you would want to know.

Shere Khan’s blood work indicates moderate kidney value elevations and mild elevation in calcium which could be an indicator of many diseases including cancer. The changes in his blood work are similar to many other cats his age. His rear right knee is arthritic and he is now on a new course of medications to manage his pain. It has been a challenge to get him to take his meds consistently which is why he spent several days in the roofed section. Since being in there he has eaten his food and meds consistently. He is fed two meals a day of whatever foods he likes best. His foods are chopped up in easy to grab bites and are often fed to him with an operant stick.

After being let out in the yard yesterday he decided that he did not want to come up for his meds this morning. So we will try feeding him in the roofed section at night and then keeping him locked up until after his breakfast and morning meds the next day.

Armani had the mass removed from the back of her throat. She did very well under anesthesia, has recovered, and is back out in her enclosure. The mass was sent to the lab for testing.

Disclaimer:  This video is very shaky at the end and the wind noise makes it almost unbearable to watch but the things I had to say were so depressing that I just couldn’t say them again.

This is the first video shot with Google Glass Explorer 2.0 and it was a learning experience.  It is not great film, because of hair blowing in front of the camera, me trying to get used to focusing where the camera should be pointing and the wind noise in the latter part of the video, but I am excited.  I think this is one of those turning points in the history of mankind (Google Glass, not my video) and is certainly a turning point in the way we will be able to do our jobs here and share that work with you.

The main reason for the $1500 investment into Glass is to bring our videos into the first person perspective for you and to be able to capture moments that I could never catch if I had to either be holding a camera or digging one out of a pocket.

Glass has the ability to take a photo by me just blinking my eye at the moment I want to capture.

It can take a video on a voice command to do so.  At that same moment I can ask Glass to text it to someone, post it to Facebook or email it.

Without digging into a pocket and swiping open my screen on my phone I can now see a weather forecast right in front of me as we are working with the cats.

I can ask Glass for directions and it displays turn for turn with an arrow to follow, in the display just above my right eye, so I never have to look away from the road.  Imagine how helpful that will be when driving to a rescue?

I can just say, “OK Glass, google natural sources of B-12 vitamins” and a display pops up right when I am shopping for some food sources for the cats.

Even if my hands are full carrying shovels and rakes, I can see my texts, emails and other alerts, scroll past.  With just a glance I can ignore them or touch the side of glass to tell me more, or even read it to me, if I have to keep my eyes on the job at hand.

I’m still learning all of the features and trying to master some of the nuances of it, but am excited to be accepted into the Google Explorer program to beta test this amazing piece of technology and be one of the pioneers who gives them input into how it can be better for different users, like those of us working with animals all day.  I just can’t wait until these are available to the masses, as I think they will become vital tools to many of our staff and volunteers.

What makes this a moment in time that could well be the singularity is that as these recording devices become more ubiquitous, and accepted in society, I think people will behave much more kindly and with a forced integrity, if they know that everything they say or do could be recorded.   The bad guys are going to hate it!

Faux fur the future in Africa? 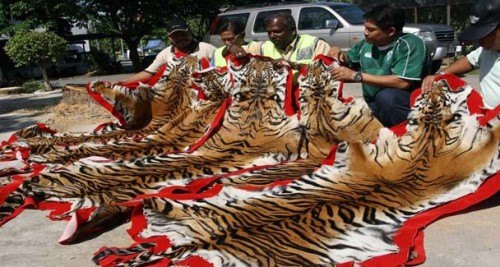 For more Last Look, watch GPS, Sundays at 10 a.m. and 1 p.m. ET on CNN After the kind of winter we’ve had here in New York, upgrades on winters coats have been the style of the season. And at the city’s recent fashion week, one of the must-have items was what was described as a “fabulous fur.” Halfway across the world, the South African men in the video are sporting fur of their own during a religious ritual. Carrying Zulu warrior shields, the men are wearing the traditional ceremonial attire of the Shembe religion – a monkey tail loin cloth, ostrich feathers on their head, a leopard skin belt, and a leopard skin cape. And perhaps fashion designers should copy this African custom. You see, for some of the members the fur is fake. In fact, it’s made in China. The international trade of leopard parts is illegal, and the skins used in this ceremonial attire usually come from poachers. But thanks to a project by the Wildcat Conservation group “Panthera,” a fake fur material is now being made in China and shipped to South Africa. Ten percent of members are estimated to have made the switch to synthetic fur, and thousands of these fabulous faux shoulder capes have been shipped to the region. It’s a strange day when African animal skins are manufactured in China and shipped via DHL…but it is certainly the bright side of globalization. http://globalpublicsquare.blogs.cnn.com/2014/02/25/faux-fur-the-future-in-africa/