0
SHARES
130
VIEWS
Share on FacebookShare on TwitterShare via Email

On June 8, 2014 both of our vets came out to re evaluate Kimba the tigress, as she just isn’t eating as well as Zeus and Keisha.  They were deliberating over what would be the best and safest course of action for Kimba because she is 20 years old and extremely frail.  We didn’t think she would even make it through the rescue and transport to FL as she was so starved and depleted.  Kimba would only eat a few morsels of food and then stop, so they decided to try and feed her several times a day to try and build her strength up before risking sedation. 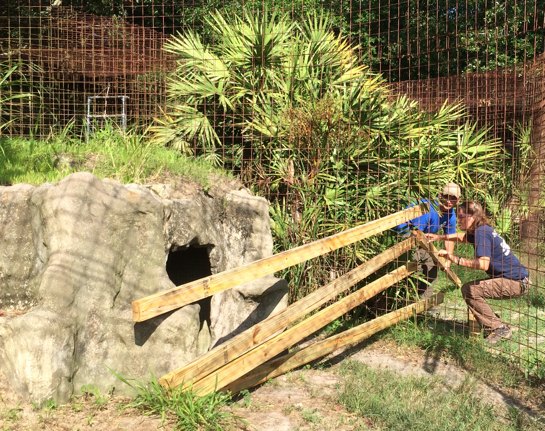 On June 10, 2014 Dr. Wynn came out to try and just lightly sedate Kimba.  Just enough to check out her teeth, look for masses and draw blood for diagnostics.  We had to block off her den so that she didn’t go in it after being sedated.  We wouldn’t know when it was safe to go in, unless we could test her for a blink response, so we used lumber to block off Kimba’s cave. 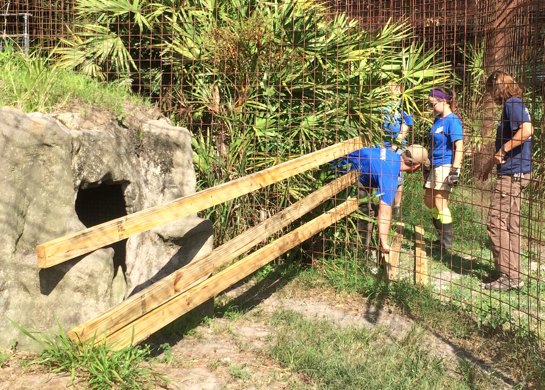 That was easier said, than done. 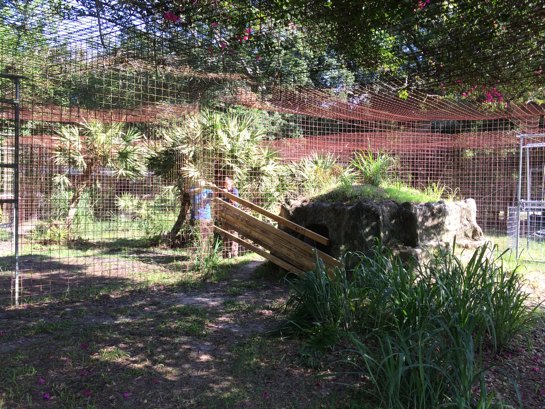 The wonderful thing about our enclosures is that the dens are so nice and cool, with the mounds of earth on top, but it makes for a challenge when we try to keep the cats out.  We don’t think Kimba can see very well. She manages to get up and down from her perches, but seems to do it by feel. Once we got her down off her platform, and safely locked away from it and the den, she was sedated.  We use a cocktail of drugs to make it as easy on the cat going down and coming back up as possible. Someone had butchered her paws in an attempt to declaw her and she has claws growing in every direction out of her feet.  It must have been just brutal to have to walk on rocks her whole life with those claws growing out every which way.

The picture above was her cage in NY at JnK’s Call of the Wild. Kimba was given extra fluids even though she wasn’t a dehydrated as you would expect for a cat who was likely in renal failure.  There were no obvious issues with her teeth and no masses that could be felt from outside, or in her mouth or throat.

Kimba will be kept inside the cat hospital pending results and to see if the cool air perks her up enough to eat more.  She is shedding a lot and we are combing out the dead fur to help her stay cool.  We use a long back scratcher to do it and she really likes it.

Kimba’s blood work show her kidneys to be pretty bad. Only one other cat was as bad and that was Sophia the cougar. She lived a year and a half after rescue but it was touch and go for a long time. https://sites.google.com/site/bigcattributes/home/sophia-cougar but Sophia was several years younger.

Kimba’s blood work also indicates that she is suffering from a urinary tract infection, which can cause kidney values to spike, so she is being treated with injections for the UTI.  She is also getting an appetite stimulant and several bags of fluids, sub q, each day.  She is being fed every two hours and only takes a couple bites, but she is eating at each meal and as her UTI begins to subside, she will feel better and hopefully want to eat more.  She doesn’t seem to mind the injections and fluids and just chuffs and rubs her head up against the cage wall affectionately.

We hope to put her back outside tomorrow in a little better condition.

Meanwhile Zeus and Keisha seem to have a new lease on life and are visibly doing better every day.

Zeus, one of our newest rescued tigers, chases Karma on the golf cart as she brings a new feeding block out to Kimba tiger.  Keisha tiger is being calm during all of the fuss over Kimba and had just been chasing some ducks.  The vets, Dr. Wynn and Dr. Justin Boorstein, check on Kimba and weigh the pros and cons of sedating her.  They opt to try and get a little more food in her and then 2 days later try to sedate her, but have a hard time getting her to come down from her platform.  Once they do, they find that she is only 170 lbs.  Our smallest tiger ever before was 225 pounds.  Kimba has a big frame, but is just all fluff and no meat on her bones.
Zabu gets a rocket ship for enrichment, but decides she’d rather lay in the shade than try to launch it.
Big Cat Rescue is a finalist for Non Profit of the Year in the Tampa Bay Business Journal Awards.
Video from Animal Care Expo of the event, the location in Daytona Beach and key note speeches by Wayne Pacelle and Jackson Galaxy.

The suit asserts the Park Service violated the Endangered Species Act, its own off-road vehicle management plan, the National Environmental Policy Act and other laws by designating hundreds of miles of new trails for off-road vehicle use in the preserve without first assessing potentially destructive impacts on endangered Florida panthers and other rare and vanishing Florida species, as well as other sensitive water, soil and vegetative resources.  Read more at the Mountain Lion Foundation. 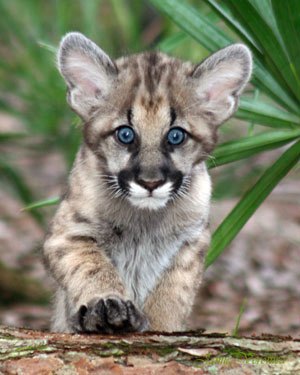 Senate Bill 3049, introduced by Senator Linda Holmes (D – Aurora) has successfully passed out of the Illinois Legislature and is now sitting on the Governor’s desk awaiting his signature.

SB 3049, which passed on the last day of session, places Gray wolves, American black bears, and mountain lions on Illinois’ protected species list, and eliminates the current practice of allowing people to shoot them on sight with no questions asked.  Read more at the Mountain Lion Foundation.

Listen to the interview from MLF’s ON AIR program, podcasting research and policy discussions about the issues that face the American lion.  Read more at the Mountain Lion Foundation.

Mexico City has a pending ban on circus animals.  The law, aimed at stopping animal abuse in circuses, was passed by the city council Monday but is still awaiting signature from Mayor Miguel Angel Mancera.