0
SHARES
35
VIEWS
Share on FacebookShare on TwitterShare via Email

If a tree falls in the woods and there is only a tiger to hear it, did it make a sound?  Ask Shere Khan.

A kitten goes to the vet after chewing the nipple off his bottle and Jamie has to dig through the poo to find it.

Great Canada Lynx vocalizations in this video by Gilligan at dinner time and we check in with Skipper who is feeling better. Jungle Cat vocalizations too, by Rambo.

Some rare video of Nico the Geoffroy Cat, and Diablo the hybrid, and extremely rare footage of Genie the Sandcat.  King Tut the hybrid chows down on raw meat.

Cybil Serval says it is way too cold (64 degrees on May 3) and Serengetti, Kalahari, Nairobi and Desiree Servals go nuts because it is dinner time.  So does Nikita Tiger.  Max and Mary Ann Bobcats play and pounce and pace for dinner.  Check out some of the cutest bobcat bellies you will ever see, when Apache does his thing and Divinity pees on their toys.

Regina spends her S.A.V.E. award on toys for Sassyfrass Cougar and Simba Leopards.

Sassy, Mac, Cody and Tobi Cougars get ramps for their platforms; built and installed by the Holley’s.  Gale asks them to build a special platform for Tommy Girl the bobcat who is pretty much blind.  Some nice footage of her.

The Bravo fence guys come and fix a gate and more of our donor inscribed bricks are turned into an entrance to the sanctuary.  Reisa Cougar chirps, as Tonga the white serval takes a bath.  Canyon Sandcat hisses from inside his barrel.  Ocelots, Amazing Grace and Nirvana come out to see what is happening.  Little Feather turns 21 and gets a doll house.

Simba Leopard is acting friendly while Interns and Volunteers are working in Cameron and Zabu’s enclosure.  Sundari Leopard is on vacation and we see her exploring after dark on a night cam. 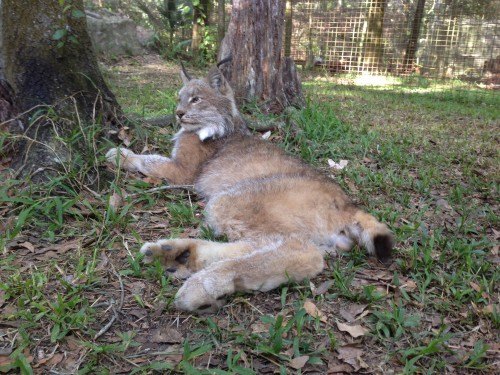 This footage of Canada Lynx fighting was not at Big Cat Rescue.  Our Canada Lynx do not have to share a cage.

The state’s keeping it quiet, but endangered lynx are dying because of the state-sponsored explosion of wolf trapping. There are just 100 of the beautiful cats left alive in the state, and they won’t last long if the illegal killing goes on.

So the Center for Biological Diversity is going to court to stop it. Please help us win the case by donating today to our emergency Predator Defense Fund. The Max and Anna Levinson Foundation has generously offered $50,000 if we can raise that much from our members too. This will make your donation worth twice as much, so please give as generously as you can.

To kill as many wolves as possible, Idaho isn’t just spending hundreds of thousands of dollars on sharpshooters and helicopters; the state has also dramatically ramped up the number of leghold, snare and body-crushing traps strewn across its landscape. The number of trapping licenses has skyrocketed from 1,114, before wolves were stripped of federal protection, to 1,943 in 2013.

It’s illegal to trap or kill lynx because they’re a federally protected species. Yet Idaho is ramping up trapping licenses to kill more wolves, bobcats, coyotes and other species knowing that lynx will get caught as well — in violation of the Endangered Species Act.

This level of trapping is deeply unsustainable. It may wipe out all the state’s lynx. And it will only get worse if we don’t stop it now.

Please help stop the killing of wolves and lynx by donating to the Predator Defense Fund.

The Center has formally notified Governor Butch Otter we’ll sue if the state doesn’t stop killing lynx — and that’s exactly what we’ll do. But we’ll need your help to win what’s bound to be a difficult legal challenge.