Oregon Zoo – The “darling little guy” is healthy, and mom, though she killed her first offspring, is “doing a great job”

An ocelot couple named Ralph and Alice apparently felt right at home after arriving at the Oregon Zoo last April. Within weeks, Alice was pregnant.

On Thursday, officials announced that Alice had delivered the zoo’s first ocelot kitten six weeks ago.

They only had glimpses of the baby, a male, and didn’t want to announce the birth until they could determine it was healthy. The protective mother kept the baby partially hidden in her den until last week, when veterinarians were able to do an exam.

After a series of vaccinations, the kitten, now two pounds and healthy, will make his first public appearance in January.

“He’s a darling little guy,” said zoo spokesman Bill LaMarche. “There’s going to be a lot of people standing in line waiting to see him in January.”

The 13-year-old adult ocelots — named after Ralph and Alice Kramden of the 1950s TV sitcom “The Honeymooners” — were born in zoos in Sao Paulo, Brazil. They were transferred 10 years ago to the Phoenix Zoo, where Alice successfully raised two babies after killing her first offspring.

Oregon Zoo keepers built a nest box for Alice in a quiet area and gave her “a lot of space” to tend to her baby, said Chris Pfefferkorn, zoological curator. “She’s doing a great job of being a mom.”

Prized for their beautiful blotchy coats, ocelots are imperiled throughout their range from South America to southern Texas. Before being declared endangered in 1982, more than 200,000 of the cats were killed each year.

Adult ocelots, which weigh about 25 pounds, primarily hunt rodents, armadillos, reptiles and other small animals. Though they can climb trees and swim, they mostly hunt on the ground. 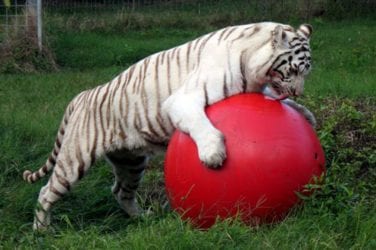 Big Cat Updates While Priya is away on vacation keepers and interns have been ... Never a Boring Moment – Escaped White Tiger “Sighting”   I was about nine ...

CANCUN, Mexico — Police in the Mexican resort of Cancun say a Bengal tiger ...