Reisa cougar seems to be having trouble seeing/hearing. Acted surprised when she saw me but did not notice me until I was up close to her. Running and jumping about her enclosure, looked scared/confused. Told Gale.  Reported By: Amber/Morgan

Desiree Serval was reportedly attacking a palmetto bush aggressively for some unknown reason.

Tonga Serval Date: Vet Issue: acting weird Food Left: mush Notes: Took a long while to start eating mush. Was only nibbling at it when he finally started eating. Went back to check and was eaten however there were vultures around so may of been them.  Reported By: Rachel S Next week, the City Council is going to hold a hearing on a bill to ban wild and exotic animals from circuses in New York City!

On Thursday, October 20th, from 9 AM to 1 PM, Council Members will hear from New Yorkers about why they should pass Intro 1233 to ban exotic and wild animals from performing. But Ringling Brothers is organizing to stop the bill. We need to come out in force to show that New Yorkers stand against animal abuse!

Can you be there next Thursday to show that New Yorkers stand against the widespread abuse of animals in the circus?

Circuses regularly violate even the minimal standards of the federal Animal Welfare Act. They tear animals like elephants away from their mothers at extremely young ages and then use bullhooks (a long, metal pole with a sharp end used to petrify elephants into performing in the circus ring) and tasers to train them. And when they aren’t performing, they are confined to narrow cages where they can barely turn around. Experts note that tigers and other big cats demonstrate stress, fear, and psychological duress in the midst of their performances.

It’s time to stop animal abuse in New York City! Even if you can’t come to the hearing, can you call your City Council Member and ask them to stand against abuse at the circus?

Tigers, elephants, lions, bears, kangaroos and other wild animals don’t wear tutus and jump through hoops of fire in the wild. It’s time to stop the abuse!

P.S. Not in New York City? Sign the petition and we’ll deliver it to the City Council

Big Cat Rescue has been the final stop for 21 tigers & leopards who previously performed in the circus. We have observed these retired circus cats since the year 2000 and note that they always arrive fearful of people, especially those carrying anything that looks like a weapon.

We use long poles to pull waste to the side of the cages, and have to be very careful to never raise the poles near the cats as they flinch, wince, lay back their ears, run, roar or hide at the sight. We don’t see that reaction in cats who were not forced to perform.

We use operant conditioning, also known as reward based training, to urge our cats to do the things we need for medical or management issues. We train consistently every day and never tell a cat “no” and never with hold food or punish a cat for failing to do the requested action. As a result, the cats do it when they are in the mood, but that won’t make them perform on cue.

We know from 16 years of daily observations of ex circus cats that they could never have been made to perform reliably in the ring if they had not been beaten, shocked, whipped, intimidated or deprived of food. You know it is the case when you see the cats in the ring with ears laid back in distress. Circuses know that people today do not want to see the abuse, so it can only happen behind closed gates and doors.

Please don’t reward this abuse by continuing to allow circus acts to exploit wild animals within your city limits.

To mark the DVD release of the multi-award winning rescue documentary Lion Ark, a series of US-wide special event theater screenings has been arranged.

Lion Ark will be followed by a short film about the Peru and Colombia rescue – see Cholita the bear, Hoover the tiger, spider monkey Pepe and the lions on the big screen, a real treat!  Then Tim Phillips and I will host a Q&A, with the inside story on frontline rescues.
DON’T DELAY, BOOK TODAY:  Screenings are over the Tugg platform, so two-thirds of tickets must be sold before November 1st, for the show to go ahead: 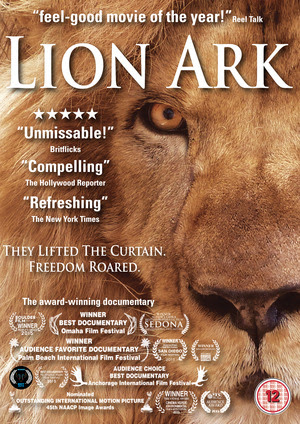 Enjoy a great night out that will leave you feeling inspired, and all funds raised will help ADI’s forever home construction for over 30 lions rescued from Peru and Colombia.  You can also support this important project at https://lionsbacktoafrica.org/lionhomes/.

The event screenings in Boston, New York, Jersey City, and Washington DC are supporting Federal, State and City legislation – helping to save more animals in the future, like those inLion Ark.

SPECIAL OFFER LION ARK ON DVD – 20% OFF ADVANCE ORDERS
Lion Ark is due for release on DVD in November and comes with a host of extra features including: deleted scenes of other animals rescued; insights into what was behind Operation Lion Ark; mini features about Operation Spirit of Freedom in Peru; and a tribute to our veterinarian, Dr. Mel Richardson.

This is a beautifully presented DVD of a film that Reel Talk described as “The feel-good movie of the year”, the New York Times as “Refreshing”, Hollywood Reporter as“Compelling Cinema Verité” and Britflicks as “Five Stars, unmissable…. Born Free with balls on.”

Until November 1st, Lion Ark is available for just $11 and will make a wonderful Christmas present with every dollar going to ADI’s work. BUY YOUR COPY AT A DISCOUNT TODAY!

I really hope to meet you at one of these special event screenings, please book now and order your copy of Lion Ark.

H.R. 2494, The Eliminate, Neutralize, and Disrupt Wildlife Trafficking Act of 2016, has officially become law. Stamped with President Obama’s signature on October 7, 2016, this law will protect elephants, rhinos and other endangered species from a sophisticated international poaching and trafficking trade that is decimating animal populations worldwide and funding armed groups.

It is imperative to creatively utilize tools at the disposal of the United States to address the human toll of such illicit networks. This law creates real consequences on atrocity perpetrators sustaining themselves through wildlife trafficking by making making certain kinds of wildlife trafficking a predicate offense under money laundering statutes and supporting the professionalization of partner countries’ wildlife law enforcement personnel and park rangers.

That first fall chill in the air really makes you want that warm cup of coffee, tea or hot chocolate in this handsome mug:

Note from the Universe