Two lynx who were part of a larger group of animals that were seized from a London, Ontario zoo by that province’s Ministry of Natural Resources after it failed to pay for a license to keep them are now safe and sound in the hands of the Ecomuseum in Ste. Anne de Bellevue.

“They seem to be really healthy, they don’t seem to have any issues. They’re acclimated really, really well,” said the local ecological reserve and park’s director of communications, Victoria De Martigny.

De Martigny could not confirm the precise origin of the animals, stating only that the male and female felines were given to them by Ontario’s ministry after being seized.

However, a well-informed source that wished to remain anonymous told The Chronicle the pair were indeed taken by the ministry after an investigation last year that ended in the prosecution of a London zoo in February 2009.

“They did come from an investigation into a zoo in the London area,” the source said.

The zoo in question seems to be Lickety Split Ranch and Zoo. According to recent Ontario media reports, its owner Shirley Campbell was found guilty in February of keeping animals without having a wildlife license.

The seized animals from Lickety Split also include a white-tailed deer, a raccoon, two other lynx, three foxes, a bobcat, and a kangaroo.

The Ministry was put under scrutiny by some animal rights groups who wanted to ensure the species in question would be turned over to owners that would take good care of them.

The source explained it is a little difficult to publicize the whereabouts of all animals seized by the ministry. “To avoid some hardship to (the animals), we keep it as confidential as we possibly can,” the source said, adding the businesses that animals are seized from could use any public information to cause further trouble.

Vicki Van Lynden, a spokesperson for Friends of Captive Animals, one such group that was particularly concerned for the welfare of the kangaroo, said the ministry staff they had dealt with were courteous and diligent. “We trusted that they were going to do this as well as they could,” she explained.

As for the two lynx in question, De Martigny said they seem to be about five to six years old.
Despite their healthy condition, it would not be feasible to release them into the wild. “Once animals have been in captivity, they’re too used to being fed by humans,” she explained.

According to De Martigny, the female’s longer-than-usual ears and reddish colouring suggest it could be a mixed species, rather than a pure-bred lynx.

The Ecomuseum is currently looking for creative name suggestions for the two beasts. De Martigny said having names for all animals helps staff and volunteers keep better track of them. “When we do guided tours, we typically refer to the animals as the lynx, or the fox,” she explained, in order to refrain from humanizing them. However, returning members to the Ecomuseum , or those who remain there on longer overnight stays, often get to learn the beasts’ names.

“We need a name that’s bilingual. We’re looking for a name that’s unique,” De Martigny added.
The park’s previous two lynx, who passed away last year due to old age, were called Ulysses and Penelope.

Those who wish to send a name suggestion may do so by e-mailing info@ecomuseum.ca, with the subject line “lynx name.”

Winners get a year-long membership to the Ecomuseum. 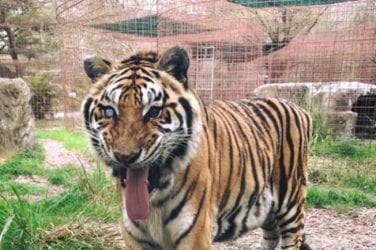 Big Cat Updates Wyeth just got a release site approved and she will be ... 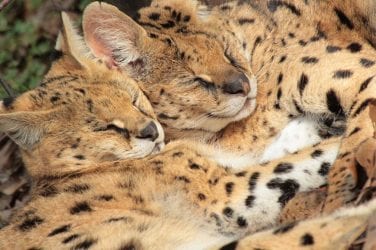 Rusty Caracal’s kidneys were so bad that the machine couldn’t even read it, and ...