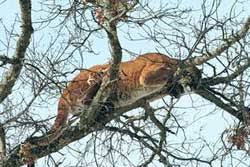 LEBANON — The mid-valley’s cougar population seems to be exploding, and state Rep. Sherrie Sprenger says relaxing the ban on hunting the big cats with dogs ought to be considered.

Sprenger, R-Scio, whose district includes Lebanon and Sweet Home, has called a public meeting on the cougar question for 7 p.m. Thursday at the Lebanon Public Library, 55 Academy St.

All options will be on the table, Sprenger said, including possibly trying to overturn the 1994 initiative that bans the use of dogs to hunt cougars.

“We’ve all read and heard about the multiple sightings of cougars and the livestock devastation that’s occurring,” Sprenger said. “It’s a problem that seems to be growing exponentially and it seems like my house district is in the center of it.”

The sixth cougar in two months was trapped and killed Thursday on a Courtney Creek Drive sheep ranch operated by Cathy Stepp and her 12-year-old son, Colton. Cougars have killed five of the family’s ewes. In March, private trapper Ron Henthorne trapped and killed two cougars within a mile of each other in the Holley area and in May, Sweet Home resident Randy Pendergraft shot a video of a mother cougar and two offspring walking in his yard on Turbyne Road.

There have been numerous other sightings in the Lacomb, Lebanon, Sweet Home and Corvallis areas.

Sprenger lives in the country and said she is concerned that it may no longer be safe for her 13-year-old son to play in the 160-acre cornfield next to their home. The cornfield borders a timbered area.

“I don’t like to do things in a knee jerk reaction,” Sprenger said. “But, I don’t want to wait until someone is seriously injured or killed and then change the law. Right now, I really want to have a meaningful conversation and have all of the options on the table. We need to figure out a reasonable way to address this issue.”

Sprenger said that in Washington state — which also banned hunting with dogs in the mid-’90s — a pilot program now allows the use of dogs in some counties with large cougar populations.

“I know some people are staunchly opposed to hunting cougars with dogs, but I know my neighbors want a way to remedy this problem,” Sprenger said. “People need to remember that cougar hunting is still allowed, but it’s extremely difficult without the use of dogs.”

According to Brian Wolfer, a biologist for the Oregon Department of Fish Wildlife, there are an estimated 5,700 cougars in Oregon. They live in wooded and brushy areas and feed primarily on livestock and deer. An adult can consume up to one deer every five days and has a territory of about 150 square miles.