OYSTER CREEK — Authorities on Thursday searched for a tiger a man had said was roaming Oyster Creek, but they never found the animal, its tracks or signs of damage to property or livestock.

Oyster Creek Police Chief Tim Bradberry, however, said the lack of evidence confirming a tiger in the area will not stop the search and police officers have been advised to be alert when on regular patrols.

“It bothers me because it’s something that can hurt someone,” Bradberry said. “But so far we’ve not personally seen any sign of it or its tracks.”

Police officers began searching for the tiger about 7:30 p.m. Tuesday after a man called the police station and said he had seen an “orange-and-black striped tiger” walking toward Oyster Creek about a quarter-mile away from the Buc-ee’s in the 4200 block of Highway 332, Bradberry said.

“The guy seemed pretty sure that it was a tiger,” Bradberry said.

But the search yielded nothing but the occasional tracks of small coyotes, which are common to the area, Bradberry said.

“The only tracks we could find were coyote,” Bradberry said. “We couldn’t find any big cat tracks.”

Bradberry said he did not know of anyone in area who has tigers as pets. So if there is one roaming the area, it probably came from someone who possessed it illegally.

Were police officers to find proof of a tiger roaming the area, it would be the second found in the greater Houston area since 2008.

In the days following Hurricane Ike, a lion and tiger escaped from their enclosures at an exotic pets center on Crystal Beach, which is on the Bolivar Peninsula.

Video of Bobcat Rescue on Fox 13 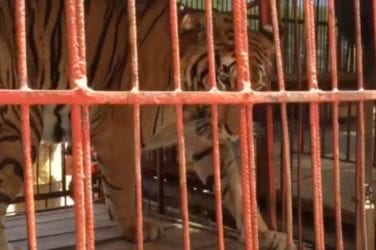 Running Naked With the Tigers Is Not a Good Idea

This could have had a very different ending. Police say two men fired from ...