NEW YORK (US): First Lady Begum Sehba Musharraf on Monday visited Bronx zoo and attended a ceremony to officially welcome Leo ” a Pakistani snow leopard ” which has been loaned by Pakistan to the facility, recognized as one of the best in the world and the first to exhibit snow leopards in 1903.

Assistant Secretary of State for Oceans, Environment and Science Claudia A. McMurray welcomed the First Lady on her arrival at the zoo.

In her remarks at the ceremony, Begum Sehba Musharraf said: “Wildlife is among our greatest resources it provides both beauty and a discovery of the natural world around us.”

Leo is a most fitting wildlife “ambassador” representing both Pakistan and his species, she said and hoped he would inspire others to care.

The First Lady said Leo will return to Pakistan where a centre would be developed for its rehabilitation and other such endangered species. She said Pakistan attached great importance to cooperation in the field of conservation of wildlife.

Presence of Leo at the Bronx zoo is a symbol of excellent cooperation between the governments of Pakistan and the United States and the enduring friendship between their people, the First Lady added.

The cub, estimated to be 14-months old, was initially discovered last year after its mother was killed. It could not be released into the wild, as it was denied the opportunity to learn hunting skills from its parent.

Through a unique partnership with the government of Pakistan, facilitated by the US State Department, a team of Wildlife Conservative Society (WCS) wildlife experts was deployed to Pakistan’s remote Naltar Valley which was then brought to New York for a capitve breeding programme.

Assistant Secretary of State for Oceans, Claudia A McMurray in her remarks said: “Today we celebrate the arrival of this beautiful snow leopard cub as a symbol of hope for the global effort to save endangered wildlife.”

Leo will remain at the Bronx Zoo and serve as an animal ambassador for his species until an appropriate facility is constructed in Pakistan.

Snow leopards are among the world’s most endangered big cats with an estimated 3,500 to 7,000 remaining in the wild, restricted to remote mountains of Central Asia.

Minister for Social Welfare for Special Education, Zobaida Jalal, Minister of State for Women Development Sumeria Malik were also present on the occasion. 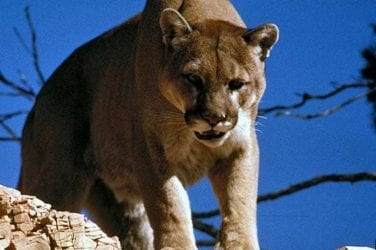 Despite not having a valid license, David Johnson used Darren Johnson’s rifle to shoot and ...