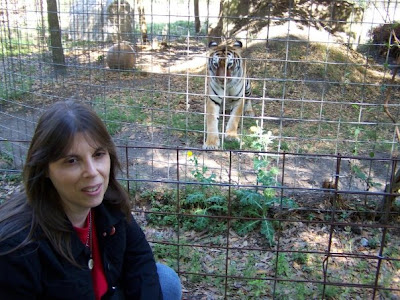 The following article is in the April 15, 2009 edition of our local newspaper, The Bergen News located in Palisades Park NJ.

PALISADES PARK –A life-long resident and animal lover is advocating for wild cats and an organization that provides a 45-acre sanctuary for them.

Darlene De Santis said, “The big cats were always my favorite, especially tigers, but I didn’t know the problems they face.”

Often, the big cats – lions, leopards, cougars and other species – are abused, abandoned, bred to be pets, retired from performing acts or slaughtered for fur coats.

Big Cat Rescue, a non-profit educational sanctuary in Tampa, FLA. was started in 1992 with the objective of “providing the best possible home for the animals in our care and trying to stop the flow of animals needing sanctuary by educating the public about the plight of the animals and supporting stronger laws to protect them,” according to its website.

Ms. De Santis visited the sanctuary, which is home to 14 of 35 species of wild cat among its more than 100 residents. They include liger, bobcats, lynx, ocelots, servals, caracals and others, many of whom are threatened, endangered, or now extinct in the wild.

“I was so impressed. It’s a sanctuary in the true sense of the word. The dedication of the staff and volunteers in taking care of the animals is amazing.”

There are a half-dozen paid staff members, and the more than 100 volunteers, do no hands-on care of the cats, she said.

All of the animals are in enclosures with outside barriers.

Big Cat Rescue receives no government support and relies on its educational activities, including tours of the facility, and donations for the maintenance of the cats, according to the website.

Ms. De Santis went on four tours, including one where senior keepers feed the animals, a night tour and one for children. Tours are held Monday through Saturday. On one tour, she watched as a keeper gave an “enrichment bag” to the cats. The bags, full of spices and sprayed with cinnamon, keep the cats alert and their senses sharp.

Ms. De Santis, who has worked in technical services at the borough library for 13 years, was spurred to support the group by collecting ink jets at the library that can be recycled for reimbursement which is forwarded to Big Cat Rescue. She also posts news to Big Cat’s yahoo group and blogger sites as well as her own site, http://www.savethetigers62.blogspot.com/

She is looking forward to her next trip to the sanctuary which she emphasized “is not a zoo.”

For more information go to http://bigcatrescue.org/