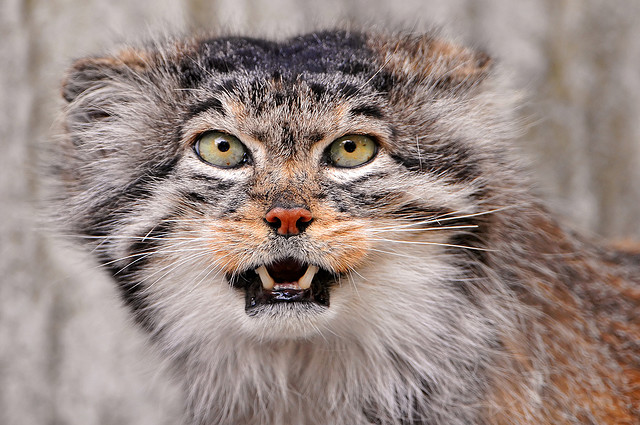 Have you ever wanted to take a trip through time to see what animals looked like millions of years ago? When it comes to cats there is little or no need.  This beautiful specimen is a Manul, otherwise known as Pallas’s Cat.  About twelve million years ago it was one of the first two modern cats to evolve and it hasn’t changed since. The other species, Martelli’s Cat, is extinct so what you are looking at here is a unique window in to the past of modern cats. 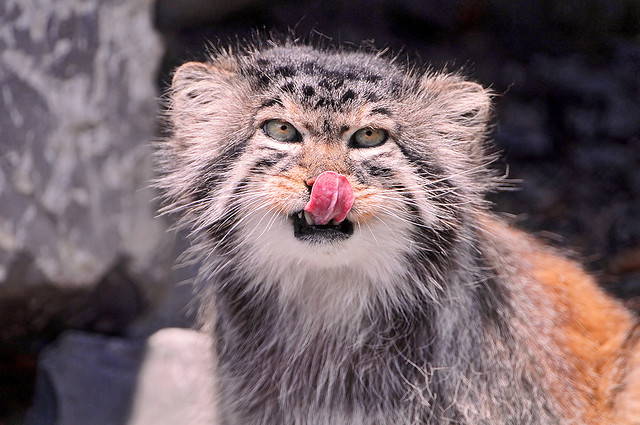 Although the Manul is only the size of the domestic cat, reaching about 26 inches in length its appearance makes it appear somewhat larger.  It is stocky and has very lengthy, thick fur, which gives it, perhaps to human eyes, an unintentional appearance of feline rotundity.  Yet although it appears stout and somewhat ungainly it has a natural elegance and poise – exactly what you would expect from the genus Felis in other words.  Plus it can certainly look after itself in a fight! 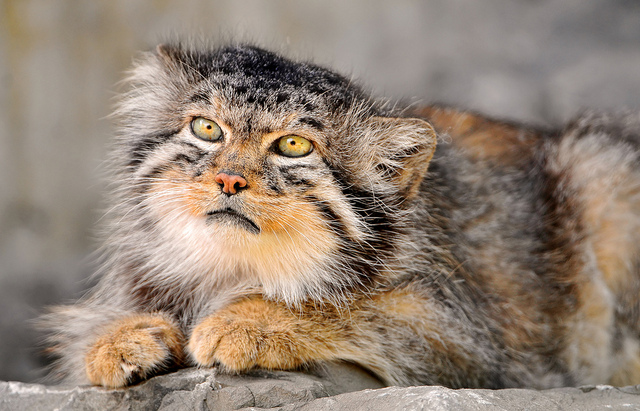 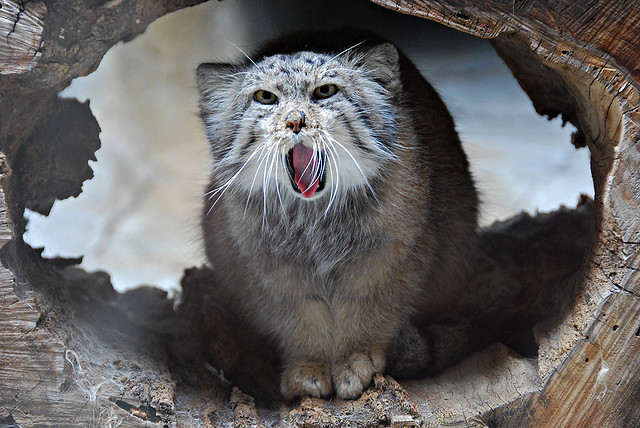 The main reason for its survival throughout the ages has been its isolation. In the wild it lives on the Asian steppes at substantial heights – up to 13,000 feet.  Based in India, Pakistan, western China and Mongolia as well as Afghanistan and Turkemistan, it has even been discovered recently in the wilds of the Sayan region of Siberia. In these places it prefers rocky areas, semidesert and barren hillsides.  In other words places where we are less likely to live – but even having said that you will no doubt be able to hazard a guess which species is the Manul’s greatest enemy. 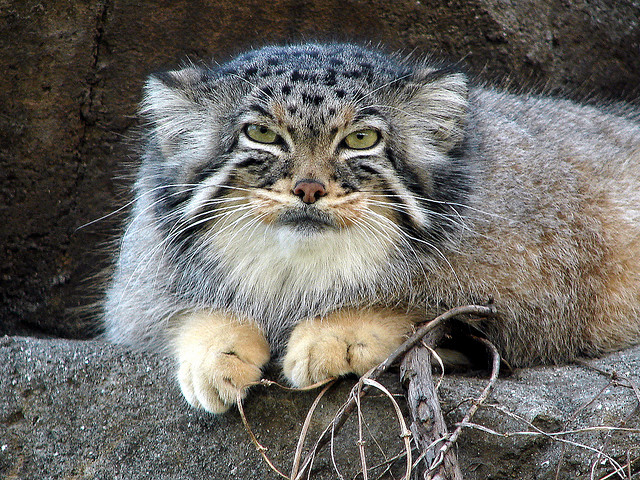 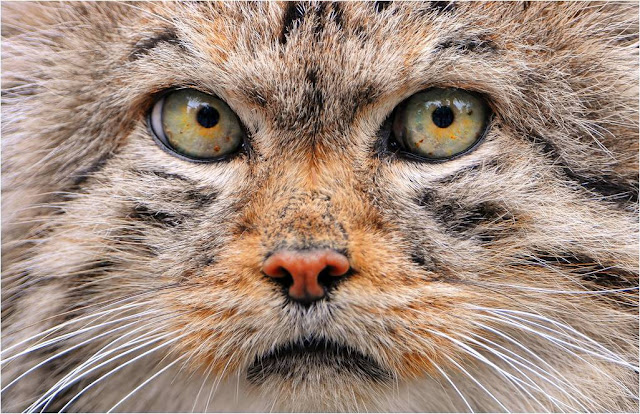 Take a close look at the eyes of the Manul.  Do you see a difference between it and the domestic cat? That’s right, the pupils of the Manul are round, not slit-like.  Proportionally too, the legs are smaller than cats we know and they can’t run anywhere near as quickly.  As for the ears, well, when you actually can catch sight of them they are very low and much further apart than you would see in a domestic cat. 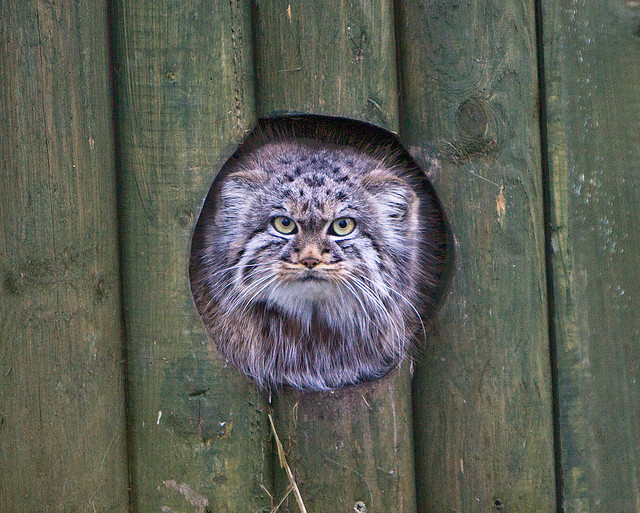 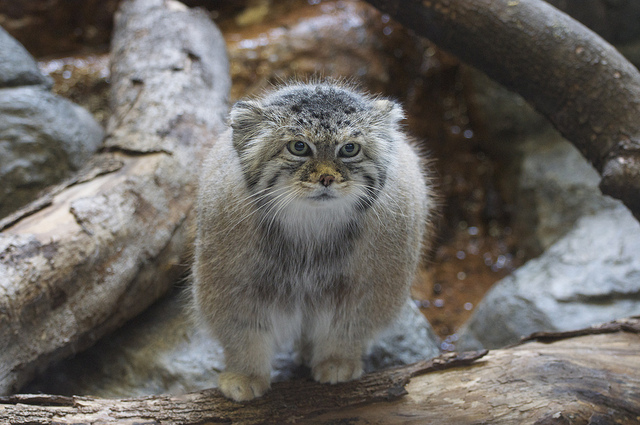 It also has a much shorter face than other cats, which makes its face look flattened.  Some people, when they see their first Manus mistakenly believe that it is a monkey because of its facial appearance and bulky looking frame.  It is easier to see why, from some angles. 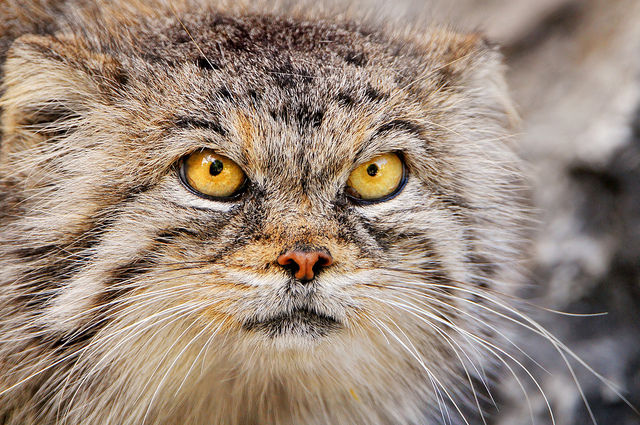 The Manus has not been studied a great deal in the wild, where it is classified as near threatened.  This is because it is distributed very patchily throughout its territory, not to mention the fact it is still hunted despite protection orders made by the various governments who create human law in its range. Before it was legally protected tens of thousands of Manuls were hunted and killed each year, mostly for their fur. 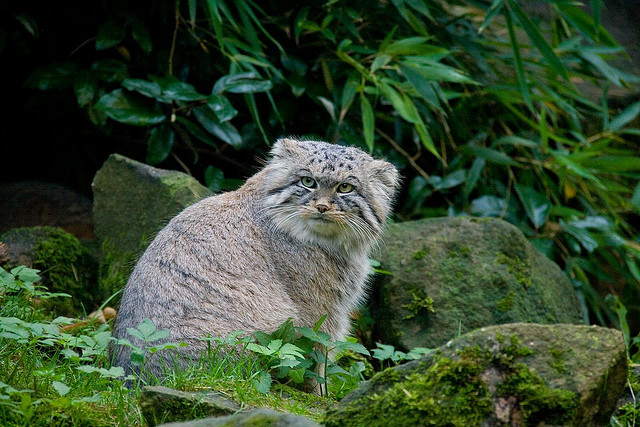 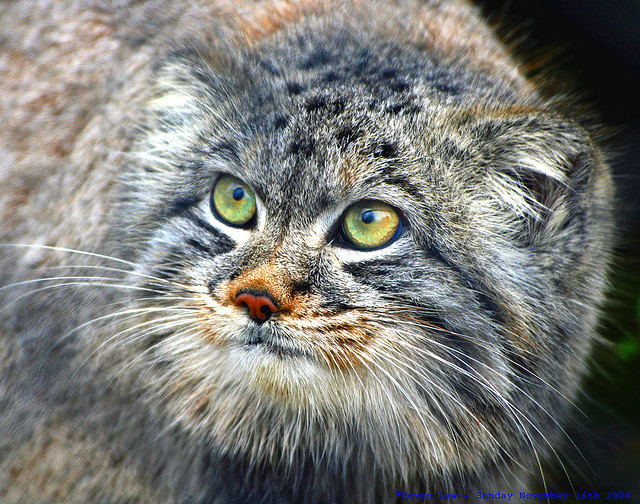 It is thought that the cat hunts mostly at dawn and dusk where it will feed on small rodents and birds. Ambush and stalking are their favorite methods of conducting a hunt and although they tend to shelter in abandoned burrows in the day they have been seen basking in the sun. In other words, behaviorally they are much like the domesticated moggy that we know and love. 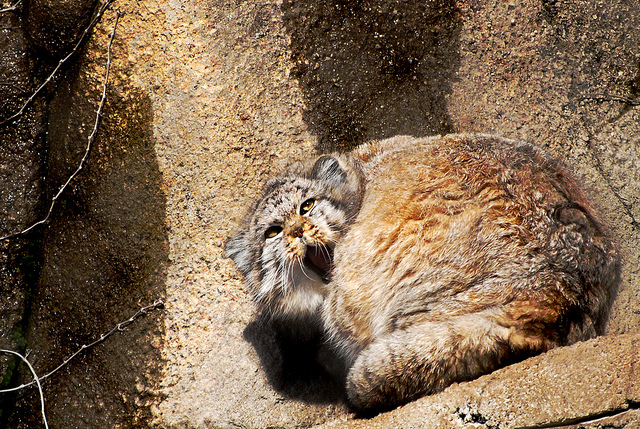 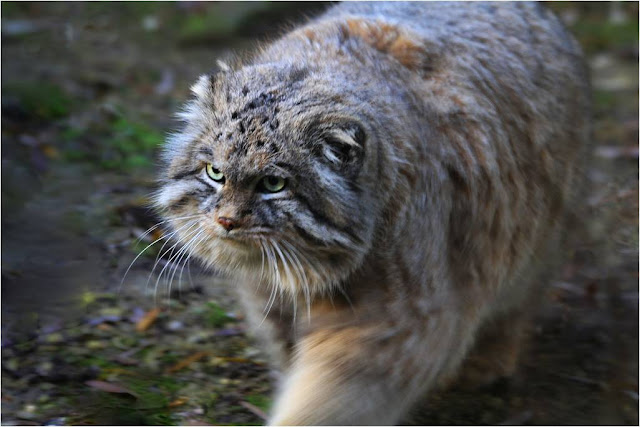 The Manul is a solitary creature and individuals do not tend to meet purposefully when it is outside the breeding season and will avoid the company of others of its kind where possible. When it is threatened it raises and quivers the upper lip, Elvis like, revealing a large canine tooth. 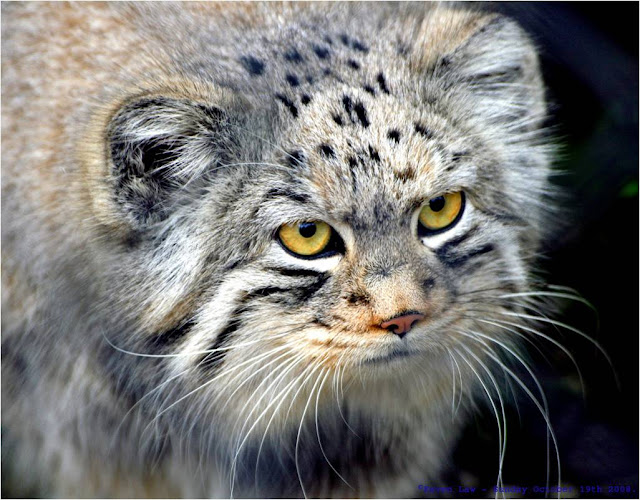 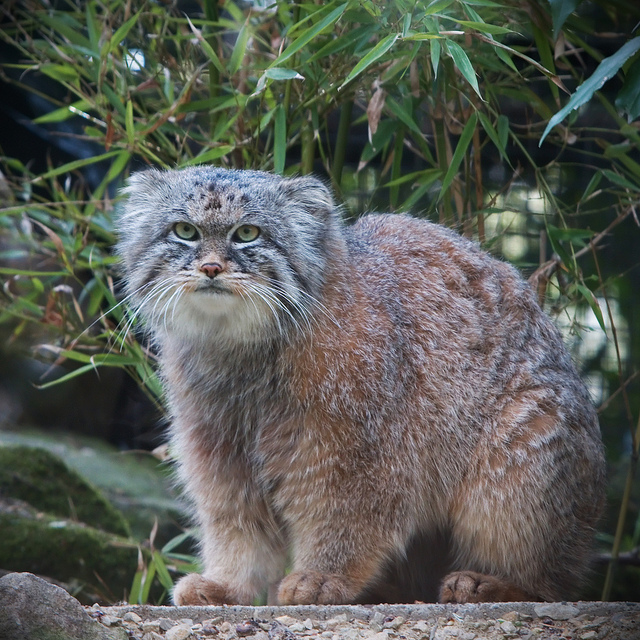 When breeding does happen the male has to get in quickly as oestrus usually only lasts just under two days. It usually births up to six kittens, very rarely a single one, and it is believed that the size of its litters reflect the high rate of mortality the infant cats can expect. Yet they are expected to be able to hunt at sixteen weeks and are very much on their own and independent by six months. Although their life expectancy in the wild is unknown in captivity they have lived to over eleven years. 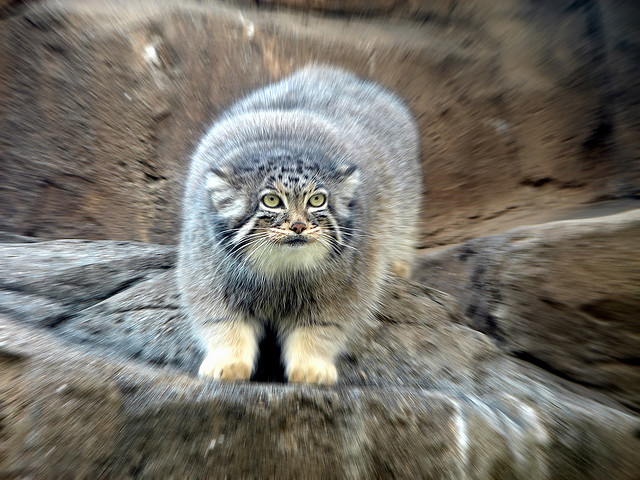 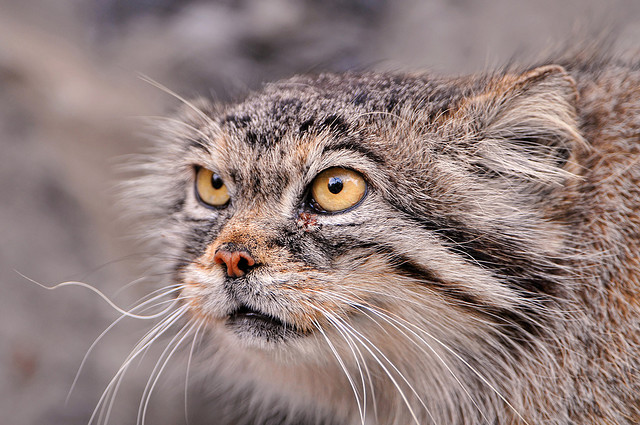 Don’t rush to your local pet store, however.  The Manul does not domesticate and even if it did they are incredibly hard to breed in captivity with many kittens dying.  This is thought to be because in the wild, due to its isolation, the cat’s immune system did not have a need to develop and so when they come in contact with us and other species, this under-developed immune system lets them down.

Yet as a living, breathing glimpse in to twelve million years of feline history these amazing animals are irreplaceable. Unique is a word which, in this day and age, is mightily overused. Yet these cats are quite simply just that – unique.