As big cats grow, precautions are taken to minimize danger

When two 14-pound Amur tiger cubs made their public debut at the Pittsburgh Zoo & PPG Aquarium in October, they were cuddled in the arms of keepers. Zoo visitors were enchanted and news photographers captured the moment.

But the zoo employees who care for the tigers soon switched to a strict hands-off policy.

“At about 20 pounds, we stopped going in with them,” said Amos Morris, mammal curator at the Pittsburgh Zoo. “They started fighting us when we weighed them.”

Mara, the female, and her brother, Petya, are now 7 months old and weigh about 100 pounds. No one would dream of petting, cuddling or hugging them, and that’s standard procedure at zoos accredited by the Association of Zoos and Aquariums.

The AZA has established strict guidelines and procedures to protect animals and keepers.

“The first rule of thumb with big cats and other carnivores: We never share the same space with them,” Mr. Morris said. “There are always at least two locks between the animals and the keepers.”

The interaction between zoo animals and keepers is scrutinized when things go horribly wrong, as they did recently at the Denver Zoo.

Ashlee Pfaff, a keeper at the Denver Zoo, died Feb. 24 after a 140-pound male jaguar attacked her when she was in the doorway of what zoo officials say is a “secure service area” in the feline building. Other keepers rushed to help her, and when they could not get the big cat away from her, they shot and killed it.

For zoo keepers in Denver and elsewhere, it was a double tragedy.

Zoo workers “are a very very close community and they truly love these animals,” said Ana Bowie, spokeswoman for the Denver Zoo, in a telephone interview. “This is blessedly rare. When something like this happens it hits everyone very hard.”

The incident is being investigated by the Denver Police Department, U.S. Department of Agriculture, Occupational Safety and Health Administration, AZA and the zoo.

Officials at zoos continuously review their handling and training procedures and share information.

The prevailing philosophy in zoos is that the animals are wild, despite the fact that they live in close, daily proximity to people. Zoos try to provide environments and lifestyles that are as close to nature as possible, and that means animals live with others of their own species. It also means minimizing contact with humans.

“They are nowhere close to being pets,” Mr. Morris said. “We treat them with respect and do try to establish a relationship with them. Every contact with them is an opportunity to train them.”

And train them they do, for zoo animals need to be moved from public exhibits to the “off exhibit” areas where they eat and sleep. Veterinarians and keepers need to provide treatment when animals are sick or injured; they need to administer inoculations to protect them from diseases.

Big cats, bears and primates are taught to come to their keepers when called, to sit or lie down on command and to lean up against the side of a cage.

It’s all done with food.

Zoo animals eat most of their food when they are not on exhibit, “and they quickly learn where the food is,” Mr. Morris said. They are rewarded with food for going where the keepers want them to go, including leaving the exhibit to enter their sleeping areas. They are never hand-fed. There are little trap doors where food can be slipped into the cage so that the keeper’s hand does not come in contact with the animal’s claws or teeth.

Zoo keepers like to keep the use of tranquilizers and sedation to a minimum. Though veterinary drugs have improved over the years, there is always some risk in sedating an animal.

Animals that have been darted may be stressed the next time they see the guns, so keepers try to minimize their use, Mr. Morris said.

No keepers are allowed to enter an animal exhibit, even when the animals are elsewhere, without informing other staff, he said. An elaborate system of sliding doors, gates and locks is used when animals are moving from one area to another. Generally, at least two keepers are present when animals are being moved, trained or receiving medical care.

Keepers regularly review their procedures and routines, and have emergency drills several times a year.

Zoo officials in Denver believe the zookeeper’s death was the first in the zoo’s 111-year history, though “there may have been a keeper killed in the 1920s by a grizzly bear,” said Ms. Bowie.

The jaguar, named Jorge, arrived at the Denver Zoo in 2005, from the Santa Cruz Zoo in Bolivia. There had been no reports of problems with the cat, she said.

The staff members who went in to rescue Ms. Pfaff were not able to tranquilize the cat because it would have taken three to five minutes for the drugs to take effect, Ms. Bowie said. Co-workers tried to get the jaguar away from the keeper, but the cat came toward them. They tried to use a fire extinguisher to keep the cat at bay, but when the cat kept coming toward them, they shot and killed it.

Contrary to what many people think, zoos would not routinely kill animals that attack people, Ms. Bowie said.

The Pittsburgh Zoo also has a team of people trained to use guns to rescue keepers. They’ve never shot an animal, but an elephant there did kill a keeper several years ago in what was deemed an instinctive fight-or-flight response.

On Nov. 18, 2002, a female elephant killed keeper Mike Gatti. The elephant was being taken on a routine walk through the zoo grounds when she stopped, pushed the keeper to the ground and crushed his chest with her head.

That elephant had never been difficult to handle, keepers said, but they did make a change after the accident.

Before Mr. Gatti’s death, keepers had been in direct contact with the elephants, but in the wake of the tragedy, they altered their training and handling procedures.

Most elephant keepers now use “protected contact” which keeps a barrier between them and the elephants. 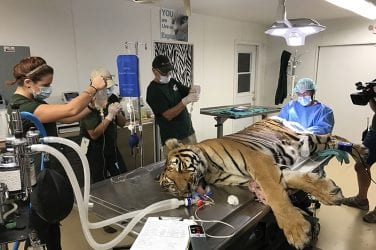 Big Cat Health Updates Hoover Tiger has been moved out to his lakeside acreage ...